The media bigwig as a birdman | Lifestyle.INQ ❮ ❯ 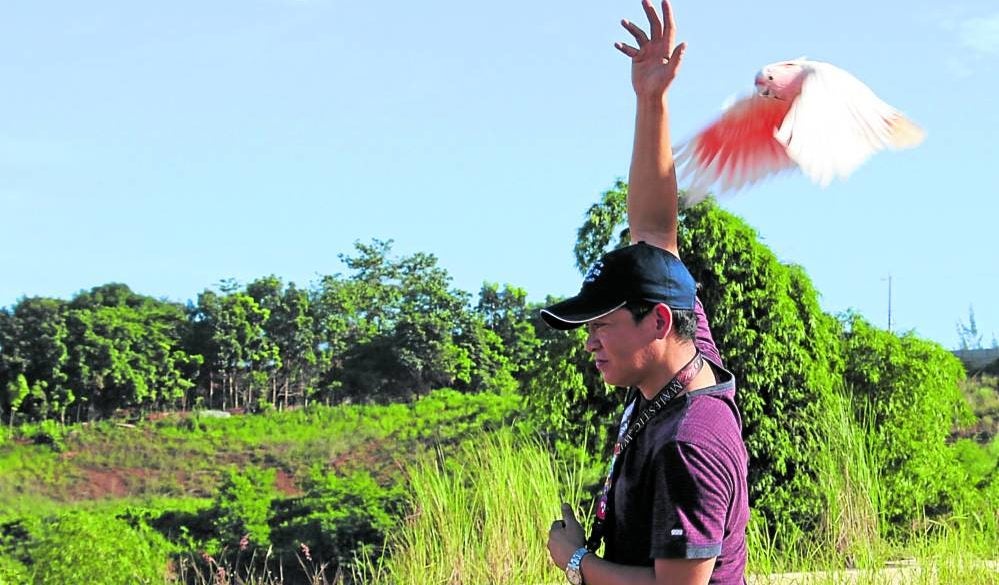 Joel Jimenez releases a Major Mitchell’s cockatoo for a free flight in Antipolo.

The media bigwig as a birdman

I’ve loved animals all my life,” says media scion and parrot breeder/collector Joel Gozon Jimenez. Since childhood, he collected rabbits, turtles, chickens, dogs and fish at home, such that it prompted his father, Menardo, a shareholder of GMA Network, to comment, “This isn’t a zoo.”

By the time he took his Masters in Management at Asian Institute of Management (AIM) in 1990, Jimenez had gotten involved in environment conservation.

Haribon Foundation, a nature protection group, was training a tribe to be self-reliant through farming instead of hunting for food. For his Walkabout, an AIM project designed to discover the self, Jimenez raised money for a carabao that the tribe could use to start their farming.

While in Palawan, he sighted a katala, a red-vented cockatoo, elegant in its pure white plumage, with lifted crest and a flaming “down under” covered with feathers. Transfixed by the endemic bird, Jimenez went home reading up on parrots. “I thought that you couldn’t interact with birds because they were in cages. I realized that they could be treated like dogs—stroked and fed by hand,” he says.

After a search for parrot sources, he discovered that Antonio de Dios, the world’s largest breeder of exotic birds, reported to his family’s office next to GMA Network. (Jimenez was assistant to the senior vice president in the ’90s and is now vice chair of the board of GMA Network and chair of GMA New Media.)

Jimenez wanted to buy an African gray parrot from the breeder. He was intrigued that it is one of the smartest birds, with an intelligence equivalent to that of a 5-year-old human.

Knowing that the bird was high-maintenance, De Dios grilled Jimenez for 45 minutes to check if the latter was genuinely committed to look after the parrot’s welfare.

“He made sure that I would take care of the parrot and not leave the responsibility to someone else. Some people will dump an animal and move on to the next hobby. He didn’t want that,” says Jimenez.

For nearly 15 years, Jimenez had been collecting parrots at his home aviary yet they bore no progeny. As a mentor, De Dios told him that it was more challenging to breed exotic birds because they needed a peaceful habitat, specific foods and the right mate.

Acting on De Dios’ suggestion, Jimenez transformed his property in Tagaytay into a parrot farm.

In 2014, Jimenez established Farmville, which included a huge aviary and several cages, a proper waste disposal system, sewer and quarantine for new birds.

Although Jimenez almost exclusively buys from BII because of its high standards of animal husbandry, the birds must be kept in the holding area for 90 days and tested for viruses before they join the main flock. Jimenez is wary of buying from other sources because the birds might infect the animals.

“It’s a crazy hobby because it’s technical,” he says. For one, he has to get permits from government agencies, such as the Department of Environment and Natural Resources (DENR) and the Bureau of Animal Industry. “If I have to gift a bird, I need to get a transport permit from the DENR. Every quarter, we have to report the production of hatchlings to them,” he says.

“It’s cheaper if I bought parrots because it’s only a one-time cost. In breeding, most of the eggs have no embryos so we put them in an incubator. If there are no veins, it’s not fertile so the egg is discarded. Right now, I have two eggs in the incubator and seven babies in the brooder. After that, they are kept in a climate-controlled box. Their food is served at a certain temperature or they die,” he explains. The babies are fed via syringe every two hours.

Caring for the parrots requires constant observation. “Birds can’t tell you if they are sick. You check the condition of their skin and poop. When the food is not digested, we have to remove it from the stomach,” he says.

For so long, the parrots slept on a bed with diapers that provide grip for their legs and lend warmth. Jimenez had accumulated so much paper during the lockdowns that he decided to shred them and replace the diapers. Suddenly three chicks died. He realized that when paper bits went into their mouths while they slept, the chicks involuntarily ingested them. “That’s a lesson for owners and breeders,” he says.

Eight years since the parrot facility was established, Jimenez has some 70 pairs of birds.

Although friends have told him to breed and sell, Jimenez refuses. “I don’t want to get birds because they are saleable. I can have black palm cockatoos and Major Mitchell’s cockatoos—they are the prettiest parrots in the world. Even if they have offspring, I want to breed only those that I want to own,” he says.

Jimenez cites the black palm cockatoos as one of his “most celebrated,” not only because of the vocal range and humanlike whistle. “It’s different from breeding an ordinary parrot. They can get agitated easily and are picky. But when you hand-feed them, they are sweet.”

The largest in his brood are the hyacinth macaws which have reached maturity yet have not yet produced eggs.

Jimenez has been training the birds to free fly rather than to speak. However, he’s had some pets that were entertaining. He had an African gray who would call on his sister’s dog and bring food to the cage. Whenever his mother was around, Little Joe the African gray would mimic Jimenez’s voice. If the phone rang, the parrot would say “Hello” and start mumbling.

Before the pandemic, Jimenez and his bird-loving friends would go on free-flight trips to Antipolo to let go of the birds in the mountains.

“We released the birds and whistled. Your heart sinks when the bird flies very far, and wonder if it will come back. When it returns, you feel good. Some small birds fly with big birds but when they can’t keep up, they go down and get lost.”

When a bird dies—and there have been a few—the farmhands perform necroscopies. The remains are burned and the ashes are used as fertilizer.

“Friends see that I am attached to them as friends, not as showpieces for display. When they ask how they can start owning a bird, I tell them to find a species that they like. I’m into breeding because I want to share,” says Jimenez.

He cites other people have kept birds because of their longevity—25 to 100 years—that they could be included in the owner’s will.

More than three decades since Jimenez first sighted the red-vented cockatoo, he is president of Katala Foundation Inc., which aims to protect the Philippine cockatoo from extinction. It has carried out the Philippine Parrot Conservation Program, which identifies conservation sites, habitat restoration and rescue of birds as well as the protection of other endangered species, such as the pangolin and Palawan deer, the breeding of freshwater turtle and forest restoration. —CONTRIBUTED