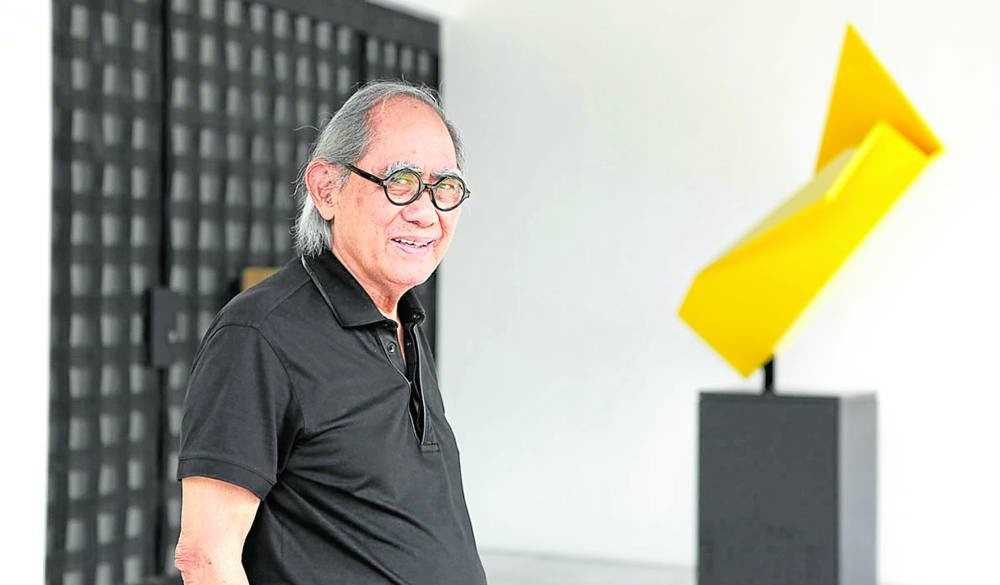 How Lor Calma raised the bar for polymath creatives

Whether building a home or his own career, Lorenzo “Lor” Calma, thought out of the box quite literally. He is still sharp at 94, though his Pratt Institute-trained son, architect Eduardo, or Ed, has taken over the architectural firm.

Using his technical expertise and intuition, Lor pursued other interests outside of his architectural practice, such as drawing, sculpture, furniture and jewelry design. Even if rooted in modern aesthetics and building techniques, his architecture affected people emotionally.

Lor isn’t leaving any important landmark and many of his buildings have been demolished by developers. His known existing edifices are Sofitel Grand Boulevard, the former Silahis International Hotel on Roxas Boulevard, Manila, and the Cancio-Calma Associates building in Makati. Even in the densely populated city, Lor brought nature into the hotel by introducing the scenic elevator that overlooked the bay.

While Makati was being developed in the mid-20th century, the Cancio-Calma building seemed like an architectural oasis in the warehouse district. It was set back from the main road and floated over a pond adorned with an abstract sculpture. Sadly, the pond is now a parking lot.

Lor’s three residences embodied his philosophy of lodging the house to the site to avoid disturbing the land. “He made the architecture respect the environment,” said Ed.

The older Calma wrung out every possible feature that the site could offer. Every stone or tree became part of the design.

In his first home in New Manila, Lor took advantage of the existing boulders by integrating them into the house. The midcentury modern house had a sunken living room and an organic pool that were punctuated with boulders. The stones from the site cladded the columns, the perimeter wall and the poolside.

The second house in Forbes Park was built around the existing frangipani trees. Instead of putting up the standard box with a roof, Lor designed multiple volumes connected with little courts that enhanced the movement through the interiors.

“The living room and dining room were separated volumes so that the trees would come between them,” explained Ed.

The ground floor was raised and detached from the curtain walls. It was romantically bordered with little canals with river pebbles. The lifted floor facilitated air flow while the pebble beds caught the rainwater, which was directed into the drainage.

Lor used glass prodigiously not to build a modern house for its own sake but to frame the views of the trees and to welcome more sunlight. “The trees served as curtains that filtered the sun,” Ed added.

Lor’s residence in the Metro south is nestled among structural metal mounts that frame the prevailing trees. “He explored ideas on how the house would embrace the site and created details from that,” said Ed.

He pushed humble materials by taking advantage of their textures and composing them to look sophisticated. In a residential project, the common brick was a surface treatment instead of covering it with plaster or wallpaper.

Built with precast concrete in 30 days, the Cancio-Calma building is a simple but striking linear mass on Chino Roces in Makati. The architect’s prodigious use of adobe was a reference to the bahay na bato. Adobe blocks are composed like an open mesh, thus creating a screen and a design pattern.

Lor ventured into interior architecture by planning the placements of the room for a seamless flow and focusing on construction techniques and architectural details for the inside.

At the Metro south residence, the strategic positioning of windows heightens the effect of natural light on the façade and interiors. The house is not reliant on luxurious materials or décor to give it character. The different lighting moods throughout the day inject soul into the place.

The Forbes Park house is dramatized by a three-story glass atrium. Instead of venturing into wallpaper for décor, the views of the trees bring the outside inside.

Lor integrated cultural references into his designs. Inspired by the rows of pits on the sungka board, he dramatized a door and a console with uneven rows of organic-shaped pits. Referencing the grid pattern of the capiz windows, he designed a door with identical rectangles of capiz and highlighted the handle with a brass trim.

The architect honed his skills in furniture design when he was the local manufacturer of Walter Knoll furniture. Lor was influenced by the aesthetics of the German modernist designer, such as the tubular frames, angled seats, luxurious leather upholstery, and lean and graceful silhouettes.

Yet, Lor injected local icons into his furniture. The Carabao Chair was a black leather tub chair with carved arms suggestive of the animal’s form and horns.

The Kalesa Cocktail Bar was a two-wheeled cart with splinter bars derived from the horse-drawn carriage.

The Duyan Chair was a slanted woven wicker square chair with a cavity for the derriere. The hollow space on the seat referenced the native cradle/hammock.

His rocking chair was covered by an upholstery of leather woven into solihiya or sunburst patterns and held up by a tubular frame.

As a sculptor, Lor explored folded frames to construct large metal origami forms and forged spirals and coils perched on plinths. His works conjured a sense of movement and impact on their exhibit sites.

In jewelry design, he collaborated with Swiss jeweler Hans Brumann in the ’90s. One of his most original designs was a gold ring with a woven band inspired by the banig. He was one of the few artists who designed tabletop jewelry pieces, miniature decorative sculptures using luxurious pearls.

All told, Lor Calma’s legacy is setting the bar for polymath creatives. —CONTRIBUTED