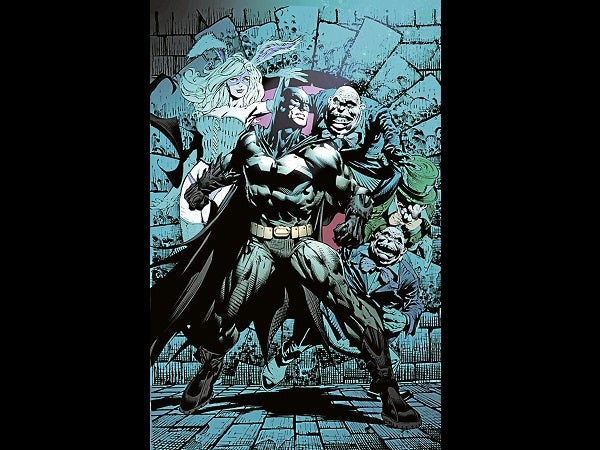 David Finch is the current artist of DC Comics’ “Batman: Dark Knight.” He is the Shuster Award-winning illustrator of, among other things, Marvel’s “New Avengers” and “Ultimate X-men.” Thanks to Fully Booked, he was able to visit the Philippines for a talk, and Duy Tano of The Comics Cube (www.comicscube.com) was able to spend a few minutes with him for an interview.

Batman is such a great visual character. I love the shadows and I love the city. It’s such a dark city, and I can be really creative with it. Because it’s not a real city, I can draw buildings in any kind of configuration I want and it still works. The villains are the most fun to draw in this entire business. Everybody loves the Joker, the Penguin, and even the Riddler is fun!

Something I’ve always wondered: Does DC have a scale model of Gotham City that you guys have to follow, or do you just make it up as you go along?

It’s very much made up as we go along. I think there are certain landmarks that we try to bear in mind, and lately there’s been more of an effort to make things a little more cohesive. So as people are creating and drawing different landmarks and different things in the city, and also the political figures, we’re putting that in a list or database for everybody to refer to, because it is pretty easy for things to start falling apart.

The Joker. Visually speaking, I think he’s great. But just in general, he’s crazy, which makes him so difficult to write, but when he’s well-written, he’s so interesting because the things he does are so off-the-wall and unpredictable that it keeps it really interesting, but he always has a point. No matter how twisted it is, it’s never completely random.

What’s your favorite Batman story, and why?

I think “Batman: Year One,” by Frank Miller and David Mazzucchelli. It’s just such a beautifully structured story. I think it’s such a crime that comic in that format wasn’t used for the movie. I can’t argue with Christopher Nolan, because those movies are great, but if it would have been me, I think I would have just done that.

What do you think it is about Batman that gives him that kind of range? Other icons, like Superman or Spider-Man, they don’t really have it.

Spider-Man is a very optimistic character. He has a lot of self-doubt, but he likes to joke and cover his own insecurity with joking, so it’s difficult to make a character like that, too dark. Now, a character like Superman, he’s all good, so much so that I don’t think he has the same dimensions Batman has. He doesn’t have the same internal conflict.

Since you’ve taken on Batman at this stage, what do you think of things like the Adam West show or “Brave and the Bold,” you know, the lighter takes on Batman?

I think there’s a place for it, and there’s a place for it right now.  I think Batman is a strong enough character that he can survive the darkest, most cynical, and vicious takes, and he can withstand the lightest and goofiest take out there in the same month. He kinda embodies both of those things really, really well.

Any interest in doing the lighter Batman stuff?

No, not really. When I first decided I wanted to get into comics, it was Marc Silvestri, Jim Lee, Jae Lee, Simon Bisley… that’s the stuff I really gravitated to. We were just talking about James Jean today, and I’m a huge fan of James Jean and a lot of the much more cartoony artists, but whenever I think about the kind of work that grabs me the most, it’s always something darker, so that’s probably where I’m going to stay. I always want to grow and not just do the same things, but at the same time, I have to stay true to who I am.

How tight does your writer on “Dark Knight,” Gregg Hurwitz, write? Do you have to follow it strictly or do you lay it out on your own?

Well, I lay it out on my own but he writes a full-panel structured story that’s pretty clear. And we also talk before I start drawing the issue; we talk through every page panel by panel. So we know what both of us are thinking. We make sure we’re on the same page, so there are no real surprises. And that makes things a little stronger, because there are times—and it’s happened before—where there are a couple of places where what he described is really clear, but what I was thinking about doing was completely opposite from what he actually had in mind. A miscommunication.

With me describing what I was thinking, we have a chance to say “Oh no.” It really helps. Gregg Hurwitz really has full control over the story, so my input comes down to framing the shots and making things as dramatic as I can make them. Gregg is very good at establishing the beats in the storytelling, so I absolutely don’t alter his structure.

You were there at DC when there was a big editorial change, and that’s led to pretty big, industry-shaking moves. Has the work environment changed at all?

You know, the work environment has changed just in the last year or so. I think DC just looked at where sales were going, and things weren’t good last year, especially at the beginning of last year. They looked at what was working and what wasn’t, and I think the main thing that wasn’t working is that books were coming out at an unreliable schedule.

With digital comics becoming more and more important, I don’t really know all the intricacies, but I do know that they have to come out exactly on time for that to work. And it’s a good thing, because this is really the first time I’ve been on a proper schedule for six years. I just feel better when I’m in a zone.

What do you think of the Philippines?

I think it’s been great so far. I’ve never been here, obviously, so I didn’t know what to expect. I think the biggest surprise for me is that all the signs were in English. I wouldn’t have expected that. Not only that, I’ve been watching TV now, and it’s “I can’t understand, I can’t understand, I can’t understand,” and all of a sudden there’s a block of English, and I understand it! And we went out for lunch today. It was great, we had all Filipino dishes. (David had chicharon at Abe at Serendra.) It’s a huge, huge city. This is my first time in the Philippines, and it’s my first time in Asia, so it’s really been kind of a thrill.

For the full interview, please visit Duy’s website at www.comicscube.com.