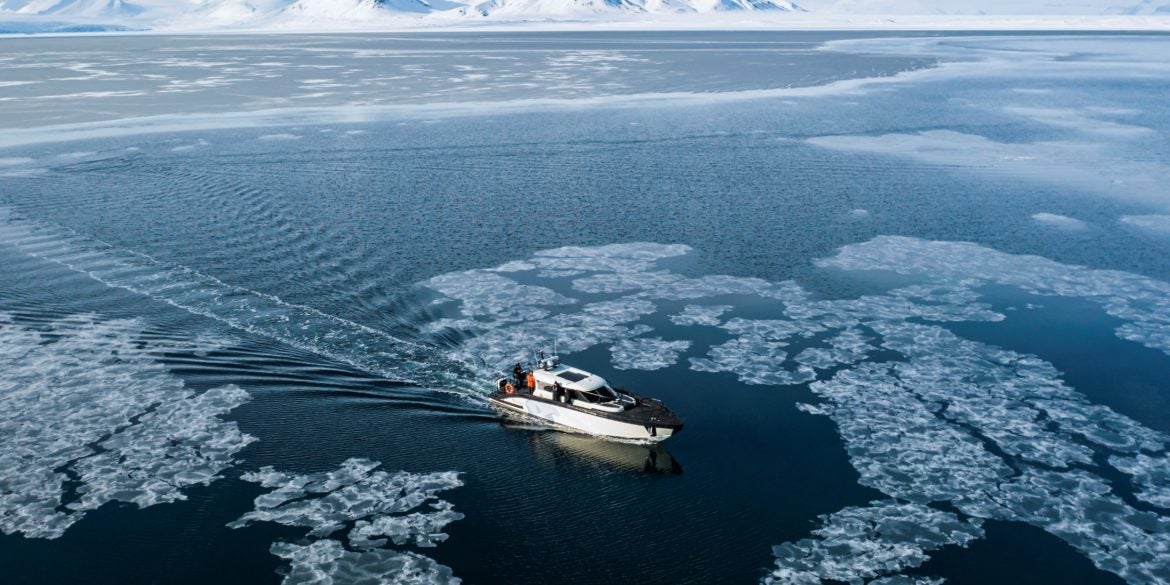 This aerial view image taken on May 3, 2022 shows the Kvitbjorn (Polar Bear, in Norwegian), a hybrid touristic boat, combining a diesel motor and electric batteries, as it makes its way in the sea ice in the Borebukta Bay, located at the northwestern side of Isfjorden, in Svalbard Archipelago, northern Norway. - Home to polar bears, the midnight sun and the northern lights, a Norwegian archipelago perched high in the Arctic is trying to find a way to profit from its pristine wilderness without ruining it. The Svalbard archipelago, located 1,300 kilometres (800 miles) from the North Pole and reachable by commercial airline flights, offers visitors vast expanses of untouched nature, with majestic mountains, glaciers and frozen fjords. Or, the fjords used to be frozen. Svalbard is now on the frontline of climate change, with the Arctic warming three times faster than the planet. (Photo by Jonathan NACKSTRAND / AFP)

Home to polar bears, the midnight sun, and the northern lights, a Norwegian archipelago perched high in the Arctic is trying to find a way to profit from its pristine wilderness without ruining it.

Or, the fjords used to be frozen. Svalbard is now on the frontline of climate change, with the Arctic warming three times faster than the planet.

The local coal mines — the original reason for human settlements here — have closed one after the other over the years, and tourism has become one of the main pillars of the local economy, along with scientific research.

“It’s always hard to defend because we know that tourism worldwide creates challenges to all the places people visit, but also in the bigger climate change perspective,” acknowledged Ronny Brunvoll, the head of the tourism board Visit Svalbard.

Around 140,000 people visit these latitudes each year, according to pre-pandemic data, where 65 percent of the land is protected.

Like the 3,000 local residents, visitors must follow strict rules that bar them from disturbing the animals — tracking a polar bear can lead to a big fine — or picking flowers in an ecosystem almost devoid of vegetation.

“You are really confronted with nature. There are not a lot of places like this left,” said Frederique Barraja, a French photographer on one of her frequent trips to the region.

“It attracts people, like all rare places. But these places remain fragile, so you have to be respectful when you visit them.”

Ultra-polluting heavy fuel, commonly used by large cruise ships, has been banned in the archipelago since the start of the year, ahead of a ban to be progressively implemented across the Arctic as of 2024.

The ban may be another nail in the coffin for the controversial cruise ships that sail into the region.

The biggest of the behemoths can drop off up to 5,000 passengers in Longyearbyen, the archipelago’s modest main town whose infrastructure, such as roads and toilets, is not designed to accommodate such large crowds.

With tourism here already attracting a rather exclusive clientele, some operators are going further than regulations require, such as Norwegian cruise line Hurtigruten which aims to become “the most environmental tour operator in the world”.

Sustainability “shouldn’t be a competitive advantage”, said a senior executive with the group, Henrik Lund. “It should just give a right to play.”

The company banned single-use plastics back in 2018, and now offers outings on electric snowmobiles.

“In the idyllic exploration areas, we go full electric. We go silent and we don’t have any combustion fumes,” said Johan Inden, head of marine engine maker Volvo Penta.

But electrification efforts in the archipelago are currently hobbled by the fact that electricity comes from a coal plant — a fossil energy source that contributes to global warming.

Regardless of whether it comes from “dirty” or “clean” sources, electricity “makes it possible either way to reduce emissions,” Eriksen said, citing a study on electric cars that came to the same conclusion.

Longyearbyen plans to close the plant by the autumn of 2023, invest in renewable energies, and reduce its emissions by 80 percent by 2030.

But Brunvoll, the head of the tourism board, noted the main problem is travel.

“Even when addressing the things we can do locally, like the emissions from snowmobiles or cars, we must still acknowledge that the really big problem is the transport to and from Svalbard, both in tourism but also for us locals,” he said.

“We have a climate footprint per capita in Longyearbyen that is insane.”