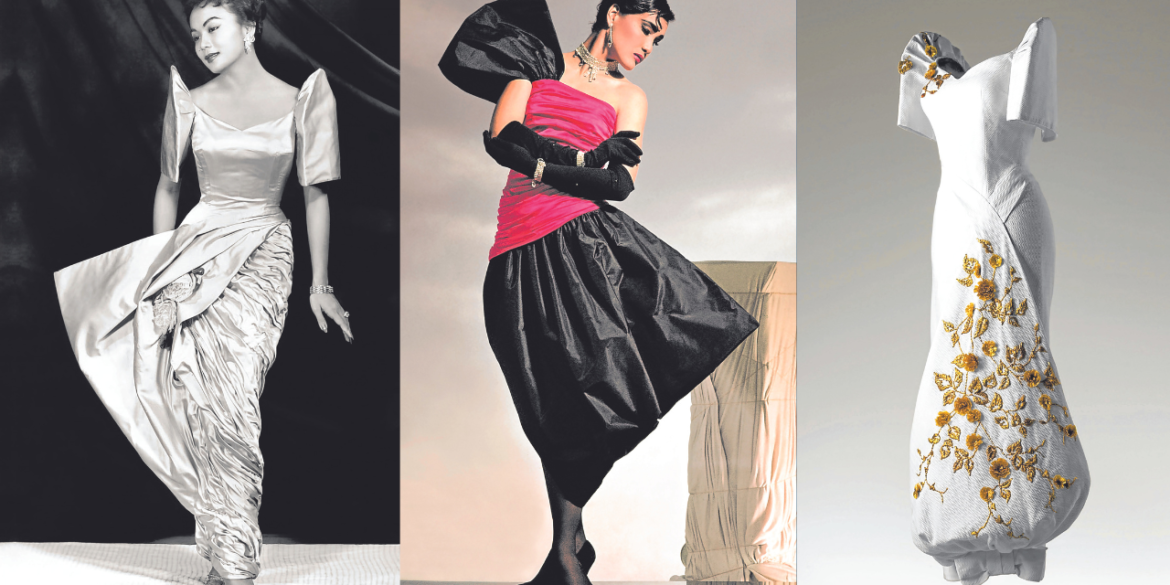 Noted for elevating the terno into haute couture and for her radical designs, Salvacion Lim Higgins, aka Slim, has been posthumously conferred National Artist for Fashion Design.

Slim is only the second fashion designer to be bestowed the honor after Ramon Valera, who was also posthumously awarded in 2006.

Slim’s son, Mark Higgins, administrator of Slim’s Fashion and Arts School, cites his most compelling reasons for putting Slim forward—her body of work and the establishment of the country’s oldest fashion school in 1960.

Slim is the only Filipino designer whose works are in the collections of the Victoria and Albert Museum (V&A) in London and the Smithsonian Institution, the world’s largest museum complex in Washington, D.C.

Devoid of embellishment, the silk satin hourglass terno, emphasized by a ruched skirt with an exaggerated flap, represented her creative process and her personality, maintains Higgins. A newspaper clipping quoted Slim as saying that the terno’s skirt was Malay-inspired.

“Imagine a sarong that you wrap around. As the wind blows, the flap will stick out in a triangle. The skirt references the sarong blowing in the wind,” he says.

Like a gesture drawing that captures a subject in motion, the dress is making a gesture, he says. “As a national dress, it was avant-garde in 1956. The pearl-gray color was an unconventional color for Filipino tastes then. It was pure artistry and showed a high level of artisanship.”

A virtuosic design, it was draped on a body and sewn with minimal seams to produce a sculptural silhouette.

Higgins explains that Slim was ahead of her time in interpreting the Filipiniana.

“Though they were dresses inspired by the culture and clothing of the Philippines, they were modern clothes that anyone could wear anywhere.”

That terno with a flap, a recurring shape in Slim’s designs, landed on the cover of the definitive book “SLIM: Salvacion Lim Higgins: Philippine Haute Couture, 1947-1990.” It is likewise included in the V&A collection, together with Slim’s Swiss cotton piqué terno with raffia flowers, created for first lady Leonila Garcia in 1957.

The Smithsonian Institution acquired the satin-and-jusi gown for then US first lady Mamie Eisenhower, a gift from Garcia during a state visit to the United States. It is part of the First Ladies permanent collection of the Museum of American History. Slim’s design was likewise one of the 10 included in a traveling exhibit of First Ladies’ gowns.

After completing the fine arts course at the University of Sto. Tomas, Slim ventured into practical arts such as fashion. She and her sister Purification set up a shop on the then-glamorous Taft Avenue in 1947.

Traveling to Europe and New York, Slim watched fashion shows, bought couture clothes and analyzed their construction. After four decades in fashion, she died of lung cancer in 1990.

Foreign curators have been impressed with Slim’s progressiveness.

“She moved with the times,” says Higgins.

In the postwar era, her clothes echoed the zeitgeist such as the midcentury shapes of Dior’s cinched waist, full skirts and bustles, and Balenciaga’s structural silhouettes, circular shawls and intricate handwork. She made the ’80s pouf dress her own by adding a train cascading from one hip.

Few designers have achieved timelessness in designs. “Her clothes are relatable to each generation and still elicit awe,” he says.

Slim’s legacy continues through the syllabus of its vocational school, which equips graduates with the tools to run their own businesses. Last year, Slim’s Fashion and Arts School pivoted to the virtual platform before the second wave of COVID. The faculty told Higgins that the students are more focused and productive. There are no immediate plans to return to on-site learning.

“We tapped a whole new market,” Higgins says. “A third of our students come from Metro Manila, another third come from all over the Philippines and the rest are foreign students. They don’t have to move to Manila to study. All they need is a good Wi-Fi.”

Slim’s has produced graduates through the years. One of its early alumni, the late Joe Salazar, was nominated for National Artist alongside his mentor. The school taught the likes of the late Cesar Gaupo, Ezra Santos, Chito Vijandre, Joey Samson and the late James Reyes. Among the young generation, three students of Slim’s out of four medalists, were cited in the 2020 TernoCon, a competition for innovative terno design.Higgins didn’t have to defend the National Artist nomination.

“My mom always told me that your work should speak for itself. In the nomination kit, traditionally, the entries included letters of support and lobbying from people who knew the artist. I didn’t do any of that. I just submitted the book, the video of her works from 1947 and clippings. I felt those could speak for themselves.”