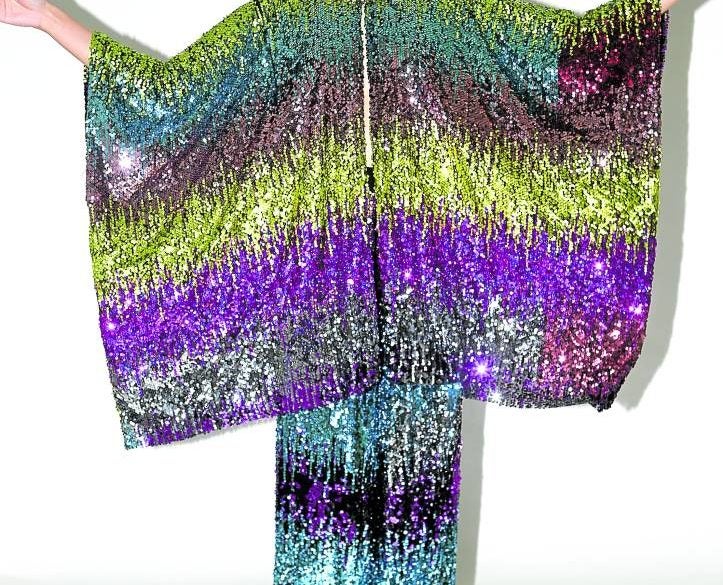 Will intimate fashion shows be the new normal?

From loose tunic tops to billowy silhouettes, volume is trending this year. Designer Anthony “Tonichi” Nocom capitalized on this vogue at an informal fashion show held at his residence. The 32-piece collection featured luxury kaftans for women and oversized shirts for men outside of mainstream retail.

A longtime designer for SM Store, Nocom produced menswear under his namesake brand for 30 years. When he discontinued the line, he ventured into SM Woman Sleepwear in 2016. It featured kaftans which he found appealing for their comfort, flowy silhouette and versatility. “You can wear it to the parlor or the grocery or on the beach,” he said.

Last summer, fashion directors Joey Espino, Raymond Villanueva, Ariel Lozada and Cata Figueroa came to his place and were delightfully surprised by Nocom’s sleepwear collection. They chorused that he should make a private collection for his clients and friends. The one-of-a-kind clothes would be for sale after the show.

“They liked my designs because they were stylish, wearable and affordable,” said Nocom. “The kaftan’s advantage is that there is no need for fitting.”

The Anthony Nocom Luxe Collection is independent of SM Woman Sleepwear, maintains the designer. He chose the kaftan for his debut collection because one can move around freely yet be chic.

Some of the clothes were political statements, such as the red kaftan cape top and capacious blue pants reflecting the colors of the new administration. The V-neck chevron-patterned georgette kaftan paid homage to the primary colors of the LGBTQ community.

Then there were nostalgic looks from the ’70s such as tie-dye in crinkled cotton, the tiger, zebra and leopard prints in chiffon, and camouflage prints, while the stock-tie matte satin midi and bat-wing kaftan referenced the ’80s. Younger women can wear cutaway kaftans—short in front and long at the back or knee-length kaftans with leggings.

Nocom evoked Halston’s laid-back styles through his version of the satin pajama sets with a camisole or ostrich feather borders and a colorful sequined square-cut tunic and loose pants.

He likewise paid tribute to Gerry Katigbak, who died of a heart attack in 2015. Katigbak was known for his exaggerated proportions, wide shoulders with tapering silhouettes, relaxed pants and a predominantly black-and-white palette.

“The men’s collection is not the usual Anthony Nocom tailored look. I want the men to be relaxed but stylish in their WFH mode,” he says. “The clothes can be worn by women, too.”

All told, it was a landmark event with four top directors who had specific duties, says Nocom. Espino taught how to pre-sell the clothes and how to sell after the show. Lozada helped with the styling. Villanueva served as the emcee while Figueroa directed. Friends Henri Calayag and Eric Maningat made up the models to look natural yet affluent, Nocom’s BFF Toots Tolentino handled the publicity, while designer Lyle Ibanez gave moral support.

As the country emerges from a pandemic, producing a solo production fashion show was too risky, notes Nocom. The directors hoped that Nocom’s event would set the trend for intimate, informal fashion shows to reboot the careers of established designers and to launch newbies.

“This show can be an experiment for brand strategy, especially for those who wish to be in the fashion business,” says Nocom. —CONTRIBUTED