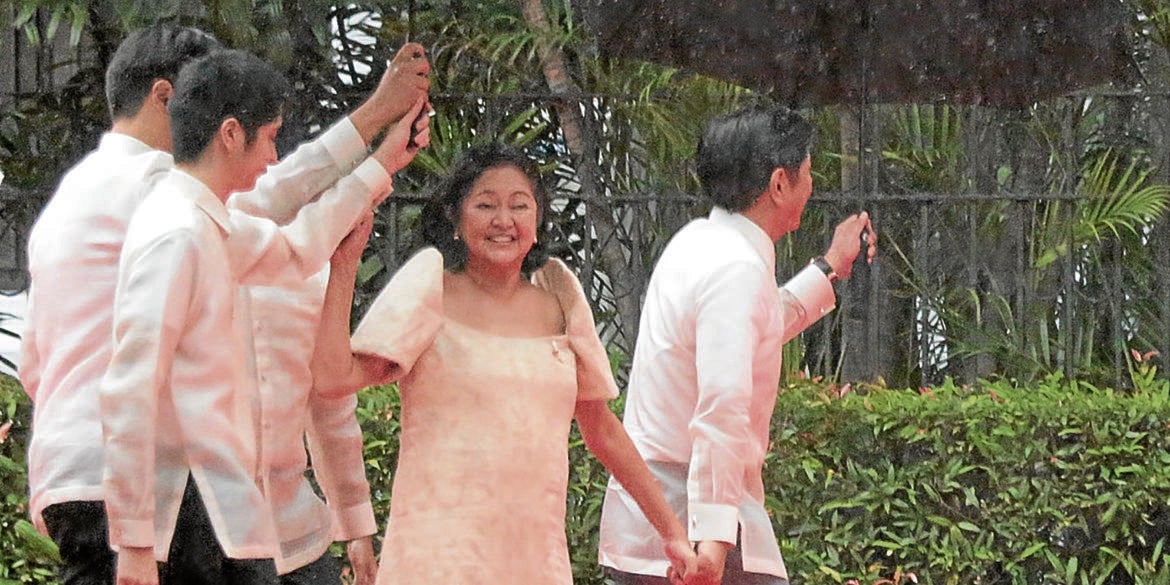 Lesley Mobo on First Lady’s dress: ‘My intention is to help weavers and embroiderers’

For the inauguration, designer Lesley Mobo created a floor-length terno for first lady Liza Araneta-Marcos. He used vintage piña with delicate embroidery that he was able to get from a collector.

“She wanted a simple dress, so I decided to use the two panels of piña that I had,” he told Lifestyle.

The hand-loomed pineapple fabric by the weavers of Aklan and embroidered in Batangas or Laguna was a natural choice for the designer, who hails from Aklan. He said that even before he was tasked to create the dress, he was determined to help revive the province’s flagging weaving industry.

“Piña is a difficult fabric because it’s stiff and the woven panels are very narrow because of how the looms are built. Vintage piña and newly made ones have different shades, the older ones come in different shades of brown, so it’s important to find panels that match for consistency.”

For the First Lady’s terno, Mobo used layers of tulle as a lining for ease of wear. “The dress itself is a simple, elegant, classic-layered column terno but with a touch of modernity. It is overlaid with small side panels of hand-loomed piña puro, piña seda and piña sinuksuk.”

The front and back of the dress were decorated with sampaguita flowers hand-embroidered by artisans from Batangas in the style of 18th-century Filipino embroiderers using craftsman techniques of calado, he added.

Mobo said photos taken during the event do not capture these intricate details, and that they are best seen up close.

“People are so used to pageantry. They want to be gobsmacked by large, obvious details. The bottom line is, my intentions are to help the piña weavers and calado embroiderers.”

“My longtime client Betsy Romualdez Quisumbing was the one who recommended me.”

Divino told Lifestyle that he went to Marcos’ residence with different fabric swatches for her to choose from. “She knew what she wanted and didn’t want. We were deciding on pastel colors, like light orange or aqua blue, but decided on the latter after checking how it looked in artificial light and in natural light.”

His original design included a cape, which they passed on since it was fairly common and had been done by other designers. There were three fittings because Marcos wanted to add more pendants, chains, brooches and lockets—gifts from her father.

“I had to dismantle several tambourine (filigreed lockets) and chains before affixing them to the dress. In the end, she was pleased with the result.”

Divino was also one of the designers who dressed former President Gloria Arroyo for state functions and foreign trips.

The designer is hopeful that he will get the chance to design more dresses for the new administration after focusing on making loungewear during the pandemic.

On social media, Puey Quiñones posted the dresses he made for other attendees, including for the President’s youngest sister, Aimee Marcos.