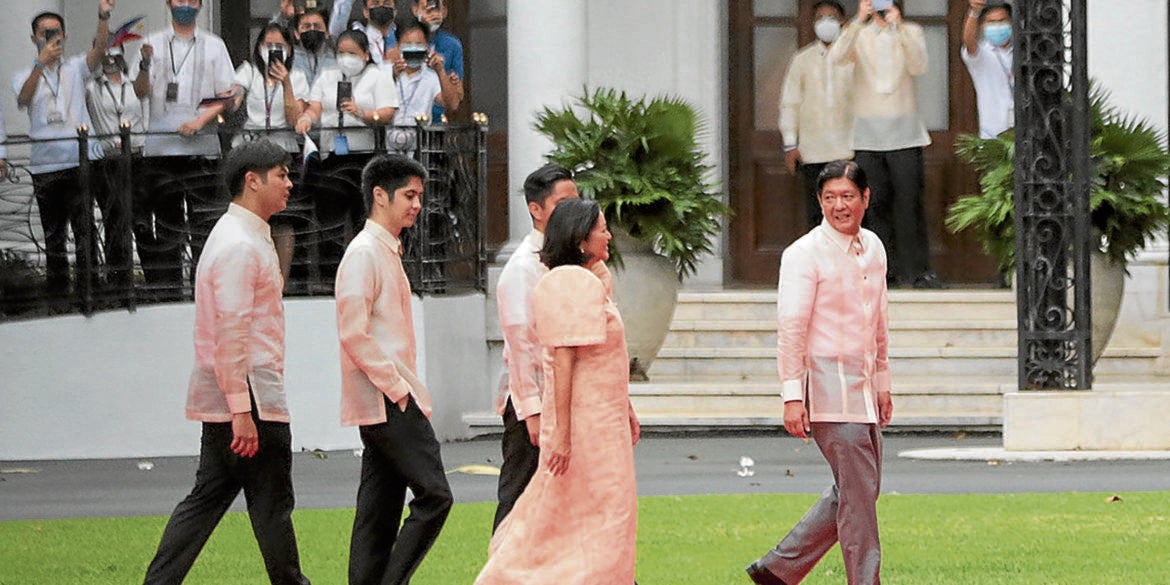 As the country is confronted with inflation, massive debts, sluggish revenue collection and a weak healthcare system, among other things, the First Family made inaugural fashion choices that were understandably pared down and traditional yet tasteful.

Designer Pepito Albert, whose loyal client has been arts patroness Irene Marcos-Araneta, created the inaugural and evening barong for President Ferdinand Marcos Jr. and some guests.

Albert told Lifestyle that for the President’s daytime barong, he used jusi (banana silk) and eschewed embellishment except for small onyx buttons and two narrow pleats that subtly ran down the length of the barong. The vertical pleats not only made Marcos Jr. look taller and trimmer, but they also projected the image of level-headedness and resolve.

The slender silhouette and the pleats were coincidentally reminiscent of Marcos Sr.’s barongs in the early ’70s, made by Italian designer Giovanni Sanna for Pierre Cardin Manila tailoring house.

“I didn’t want the barong to be boxy,” said Albert.

The evening barong was defined by ornate burdang Taal, the ancient hand embroidery from Taal, Batangas. It’s been said that ternos and barong of Marcos’ parents were woven in Taal.

The President’s evening piña barong was a play on various calado or latticework embroideries with simple vine patterns all over. The designer added that he made pants with embroidered rayadillo or stripes.

Albert is known for his perfect proportions and impeccable workmanship. The simplicity of his designs focuses on the wearer’s personality and the fabric.

His ternos made for prominent women are typified by swags, subtle draping and pleats on the bosom that lend an authoritative and regal presence.

Albert created two minimalist but lustrous ternos for the first lady—one in off-white dupioni swathed with chiffon and the other in crisp, beige shantung capped with piña.

But unlike the 20th-century first ladies who favored a specific couturier, Liza Araneta-Marcos exercised fashion discretion, shifting between designers whose clothes best exemplified her intentions for each occasion. She instead opted to wear a piña terno by Lesley Mobo. (See related story in this section.)

Former first lady Imelda Marcos wore blue, the color associated with the Marcoses but in a softer shade. Albert’s ice blue terno was softened with ruched chiffon on the bosom and a cascading ribbon.

Although Albert prepared a banana yellow terno covered with a puffy piña drape for Marcos-Araneta, the President’s sister was absent.

“Liza is very easy to work with. She and Bonget (the President’s nickname) know what they like. You don’t have to second guess,” said Albert.

The President’s clean and crisp style complements his wife’s modest taste. Friends say the first lady is makeup-shy and has never shown interest in designer clothing and accessories. She pays more attention to her family life, profession, academics and advocacy.

Although fashion isn’t in the list of crucial priorities of the new administration, the first couple’s prudent sartorial preferences and styling team present a foretaste of old school elegance. —CONTRIBUTED