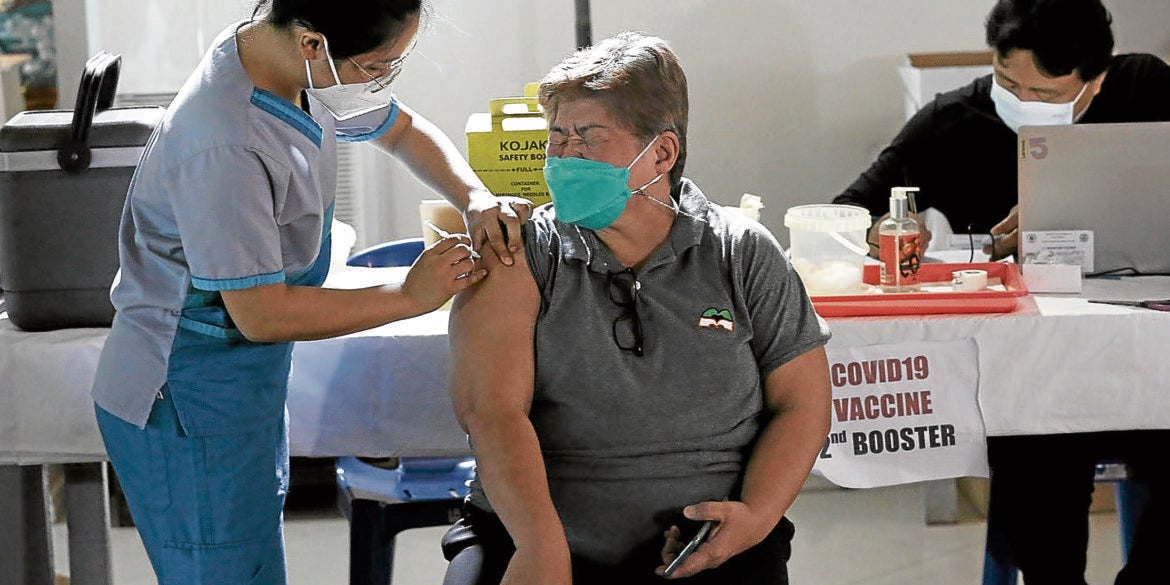 US-based Dr. Marivic Villa says that the biggest challenge now for physicians is to distinguish between active COVID-19 infec- tion and vaccine-related complications. Above, a senior receives a booster shot of the COVID-19 vaccine. —RICHARD A. REYES

Many local physicians we know are more confident in treating critically ill COVID-19 patients and those with suspected vaccine-related complications if they have Florida-based Dr. Marivic Villa on their side, even just virtually. She is the current president of Concerned Doctors and Citizens of the Philippines (CDCPh).

A specialist in internal medicine, pulmonary medicine and critical-care medicine, she has helped manage countless critically ill COVID-19 patients, particularly high-risk senior patients, both in the United States and in the Philippines.

COVID-19 is a multisystemic disease involving various organs, and we’ve had the privilege of comanaging some cases with her. We admire her professionalism and compassion in going out of her way, waking up at unholy hours when the patient’s clinical course takes an ominous turn.

Marivic shared that the biggest challenge now for physicians is to distinguish from active COVID-19 infection and vaccine-related complications. She sent us this rejoinder to our commentary on sudden adult death syndrome (SADS):

“I am not at all surprised by this awful cardiac event (SADS). I serve a mostly senior population here in The Villages, Florida. As a direct observation, the occurrences of cardiovascular decompensation (heart failure) in my practice and in our community have notably increased since the vaccine rollout, and much more so since the booster rollout. There’s increase in heart attacks, congestive heart failure, abnormal rapid irregular heartbeat (atrial fibrillation) with frequent palpitations.

“I have been treating COVID long-haul since last year. Initially, most of the cases were from the natural COVID infection. However, since the beginning of this year, there’s a big influx of cases that are mostly vaccinated with three to four inoculations. My biggest observation is that the signs and symptoms profile and clinical presentation of long-haulers from moderate to severe natural COVID infection, and individuals vaccinated three to four times, are almost indistinguishable from one another.”

Long-haul COVID-19 is the persistence of symptoms of the viral infection months after recovering from the acute infection.

She adds, “I observe the following:

“1. There is a significant decline in CD4, CD8 T lymphocyte (protective cells of the immune system) counts resulting in a lower production of naturally occurring antibodies (IgG); hence, [resulting in] immune deficiency. Frequent and recurrent infections in my patients have been very common since October of 2021. Reactivation of latent or previously dormant infections like herpes viruses, TB (tuberculosis), etc. are also striking.

“2. Hypercoagulable state (increased tendency for blood to clot). [There is] easy clotting of blood as consistently shown by elevated D-dimer (blood test) resulting in both subclinically and clinically significant blood clots in any organ but most notably in the cardiovascular (heart attacks), pulmonary (pulmonary embolism) and the nervous systems (stroke).

“3. Elevated markers of inflammation (as noted in blood tests) like cytokines and c-reactive protein, causing severe signs and symptoms.

“All these can be confirmed by blood testing and other modalities of testing in these SADS cases.

“Even though the mechanism is still unknown, I agree with the assumption that the cause of people’s demise is a fatal malignant arrhythmia (rapid irregular heartbeat causing cardiac arrest)

“How the arrhythmia is generated is a deeper mechanism to be uncovered. But based on the above observations, the main mechanisms I highly suspect are as follows:

“1. Microthrombosis (small blood clots) directly affecting the vagus nerve (nerve involved in heart rhythm) and the electrical conduction system of the heart (nerve and pacemakers, sino-atrial and atrio-ventricular nodes). The presence of spike protein in the circulation promotes microclotting/microthrombosis resulting in organ dysfunction.

“2. It could also be due to persistent inflammation created by spike protein harboring immune cells called monocytes, resulting in recurrent or almost perpetual vascular inflammation.

“3. Autoimmune attacks to the organs.

“4. The intrinsic toxicity of spike protein could directly affect the vagus nerve and all of the electrical conduction system of the heart (an ominous idea).

“It’s a very sad affair indeed that we are having these neurocardiovascular occurrences in younger people. It’s also disheartening, disappointing and frustrating that ‘people’ don’t move fast enough to make the analysis and discovery as to what’s the real score and connection of this event to the vaccine. It’s also tragic that some are just simply dismissing it.

“At least based on my own clinical experience, I do not have a shred of doubt that the vaccine is the culprit. It’s high time that we start helping these vaccine-injured people; then figure out how we can not only effectively treat but prevent these vaccine-induced diseases even without the support and recommendations [from experts who don’t recognize them].

“Understanding and having the knowledge are of utmost importance. Halting this vaccination is the highest emergency!”

Dr. Homer Lim, immediate past president of CDCPh, who has earned much respect from his local colleagues for his effective and pragmatic manner of treating cases of COVID-19 using available natural products and repurposed drugs, sent these comments:

“The increase of sudden deaths in young children and adults may be linked to an increased incidence of myocarditis or pericarditis, which is inflammation of the heart muscles or the lining around the heart.

“In a published article by Krug et al., ‘BNT162b2 Vaccine-Associated Myo/Pericarditis in Adolescents: A Stratified Risk-Benefit Analysis,’ it clearly demonstrated a significant risk of myo/pericarditis in children age 12 to 17 years old with an occurrence of 118.7 and 12.7 per million vaccinated in boys and girls, respectively. Background rates of myocarditis prior to vaccinations was 2.1 per million and 1.4 per million cases for boys and girls, respectively.

“Moreover, in an observational study by Gundry SR of 5,666 patients age 28 to 97 years old who received two doses of COVID vaccines, their risk of acute coronary syndrome or heart attack more than doubled from 11 to 25 percent, as demonstrated in the PULS (protein unstable lesion signature test, or risk analysis) cardiac test.

“The authors concluded that the mRNA vaccines dramatically increased inflammation of the heart and blood vessels that may explain the higher risk of heart attacks, cardiomyopathy and other vascular events. Sudden cardiac deaths must therefore be thoroughly investigated, not just observing the arteries but also the microscopic image of the heart muscles for signs of inflammation.”

When we see smoke in our house in the middle of the night, we don’t go back to sleep until we’ve found the source of the smoke and made sure it’s nothing we should worry about. Experts here and abroad have been voicing out their concerns, shouting “smoke, smoke!,” but the cries seem to be falling on deaf ears.

An early victim of COVID-19 himself, President Ferdinand Marcos Jr. announced in his inaugural speech that there will be no more secrets in the manner the government decides on its antipandemic responses. There will be utmost honesty and transparency, he implied. We hope no files of skeletons come out when the closet is opened.