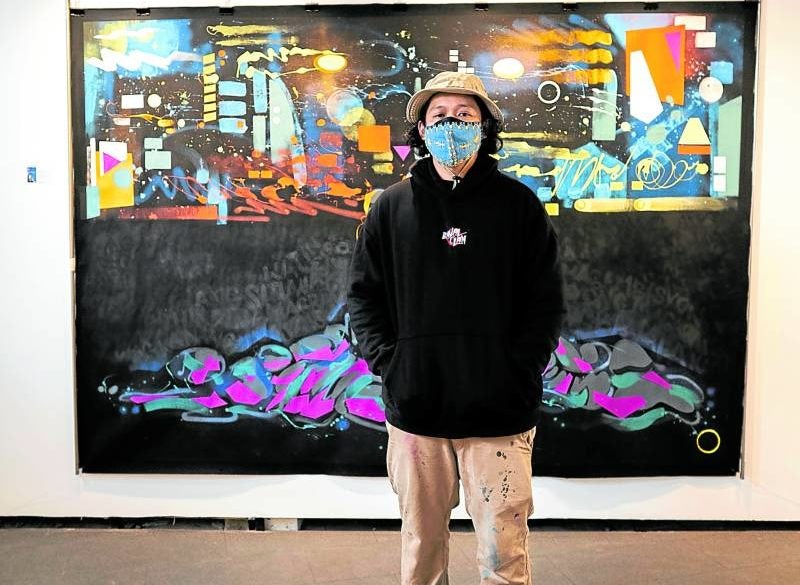 Layers and beats: The art of Mic Rahman

“Pwede niyo tapakan ‘to. It’s a piece but it’s a floor mat,” said Mic Rahman. And as the artist moved around Gallery Ninety in Baguio, talking about his process, his sneaker-shod feet did step on the mixed media installation he called “The Great Flood (a Hyperstation).”“A lot of cultures have their own great flood story. Even here, Igorots have their own great flood story,” Rahman said.

But stories have a way of turning into reality, the artist believes.

“Dahil nangyayari ‘to,” he said, motioning to his triptych paintings called “Thermal Maximum 2160”—an expression of his worry over global warming—and then pointing to his banig installation. “Mangyayari ‘to.”

The gallery guests walking over the mat as they viewed Mic’s paintings didn’t know it but they had just become part of Rahman’s installation as well. “Why a mat? People just step on it. The issue is there ‘but I’mma get my fast food anyway.’ Everyone’s focused on distractions,” Rahman told Super.

“Thermal Maximum 2160” and “The Great Flood (a Hyperstation)” are just two pieces from Rahman’s solo exhibit presented by Gallery Ninety and Casa Luningning.

Rahman is a veteran of multiple group exhibits. Then, some years back, a gallery in Makati had asked Rahman to do a solo show but he decided to share the limelight with TCMF. “I invited the whole crew, our graffiti crew, and it became a group thing.” 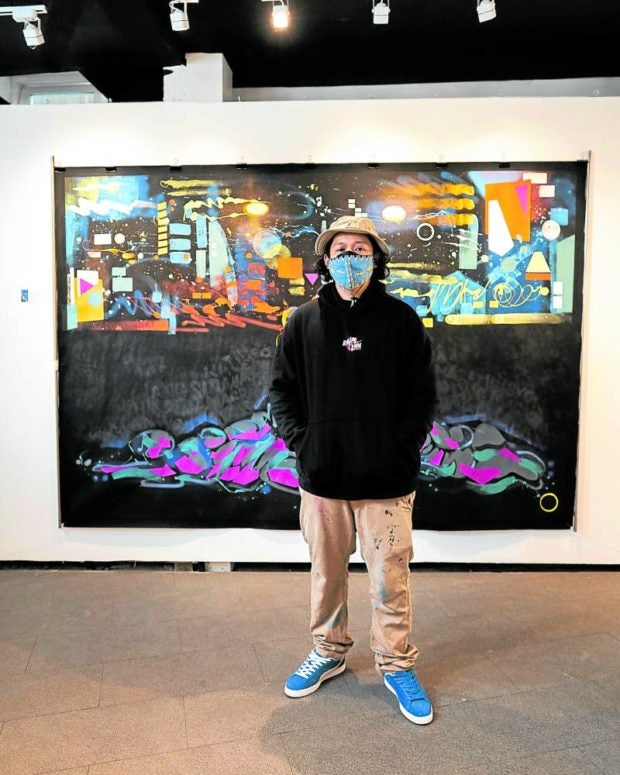 Rahman was born in Baguio and lived here until he was in the fifth grade. And throughout his life, he’d keep coming back, including the pivotal time he converted to Islam several years ago. It just seemed apt for his first solo gallery exhibit to happen at his birthplace too. “When I heard about the space, it made sense. I thought it would be nice to have my first solo show where I was born … parang born again.”

He called the exhibit Mongrel: Fracted Identity. During his artist talk, Rahman said, “Mongrel means a dog that has no apparent breed … it may be a mix of different breeds, unpure, basically. The word has a negative connotation and I really don’t know why because in my experience askals are the smartest dogs ever, super tough, super resilient. You leave them outside and they’ll survive on their own instincts.”

Rahman shared with the crowd at Gallery Ninety, “I was born here in Baguio, I grew up in Baguio, moved to Tarlac, my parents are Kampampangan, Tagalog, Waray, Bicolano … I am a mongrel. It’s different cultures, different mindsets.”

Everything is about layers, he said, including his art. “Everything is just layers of colors, of different memories, different feelings, different everything, really. I just put everything on the canvas or the wall, whatever I’m painting, and slowly the image comes out. In the process of layering, something comes out, minsan mabigat, minsan light lang, it really depends. Layers. Layers, that’s really what the art is about. Mongrel din ‘yun. Layers of me personally as an artist.”

His mother was always encouraging of his art—she’s even kept his first drawing from when he was just two years old. Rahman has done something similar with his own child—he got Lily Amihan’s first drawing, done when she was just a year-old, tattooed on his arm.

Music is another big part of Rahman’s life. He’s a rapper and he’s part of the badass hip-hop collective Bawal Clan. “I made my transition to music because I was a fan of music. I was a fan of hip hop culture, the dancing, the graffiti, the rebelliousness of it.”

The members of Bawal Clan were in Baguio to support Rahman.

The group—including Rahman—performed in front of an enthusiastic, hip-hop loving crowd at Lockdown Bar a few days after the exhibit opening. The gig served as Mongrel: Fracted Identity’s after party.

Rahman said, “Bawal Clan is the dopest. It feels great. It’s always nice to have the boys. We support each other with everything that we do.”

They just released their latest album “Tales From the Crypt Vol. 1” (Listen to it on Spotify.)

Rahman compares his abstractions to music. “When you look at an abstract piece, it’s open for interpretation. When you listen to a piece of lyric especially in rap, it’s easy to take it surface level lang. Oh yeah, guns, oh yeah, violence, bitches and hoes… But when you really listen to the body of work, there’s different levels. Yes, they say all these things, but why are they saying these things? Some people end up digging deeper.”

And he likened his process to making music. “I just ended up translating it to visuals because I don’t know how to make beats. I just write raps. Making music is a big frustration … I don’t play any musical instruments. But, I think I have a good ear for it, and it gets frustrating when I can’t translate it into music. I live with my friends who are really good producers. Every day I see them work, I see their process, they choose a sample, cut the sample, mess with the sample, add the beat, over and over again until they come up with the right sound. Watching that process, I ended up doing the same thing with my pieces.”

He motioned to his painting, “SEX, DRUGS, RnB.” “Here, what’s the sample? Maybe I was lustful. Sample: naked lady. Break down the sample, splatters, choose the color … Add the drums, boom boom boom, solid lines, add the beat, solid lines, add the melody … Okay, maybe we need a few hi-hats … So basically natranslate ‘yung musical process into a visual medium, which is still part of the mongrel realm. When you see the end piece hindi mo na alam yung root eh. That’s the beauty of it.”

There’s a depth to Rahman’s work—they’re personal explorations but also reactions to what is happening in the world around him. There are pieces about the drug killings, the community pantry movement, the Marawi siege. There’s a sculpture that delves into acculturation. And again, there are layers, so many layers.

Some of the pieces are from the three years he spent living in Bontoc. He painted every day there, he said. Some are pieces he worked on during the pandemic, in Batangas where he lives with his girlfriend.

It is his hope that his art would make people think. “What is this? Anong ibig sabihin nito? Once people start thinking that way, at least half the job is done.”

And it’s a chance for the audience to think about their own layers as well. Like Rahman said, “We’re layers of culture, influences, even media, the media that we consume.”

He urged the people at the gallery to question his art too. He said, “Kwestiyunin nyo din. You can say, ’T***ina ang pangit nito.’ And that’s okay.”

Rahman reminded everyone, “We’re here in a gallery looking at art, that’s a privilege. Creating art is a privilege too. I don’t want to be preachy, I guess what I’m trying to say is appreciate each other more. Be nicer to each other and a lot of beautiful things will come out of that—exchanging ideas, exchanging cultures, exchanging beliefs. Let’s tell new stories. Be open and you’d learn new things.”

New stories are even more important now, Rahman said, as the world emerges from the pandemic.

Rahman has plenty of stories to tell—Mongrel: Fracted Identity shows that.

And he thinks this should be celebrated. He said, “I don’t see much value in purity. Pure diamonds are easy to make, you can make it in the lab. It’s the dirt, it’s the impurities that make it way more valuable, way more precious.” 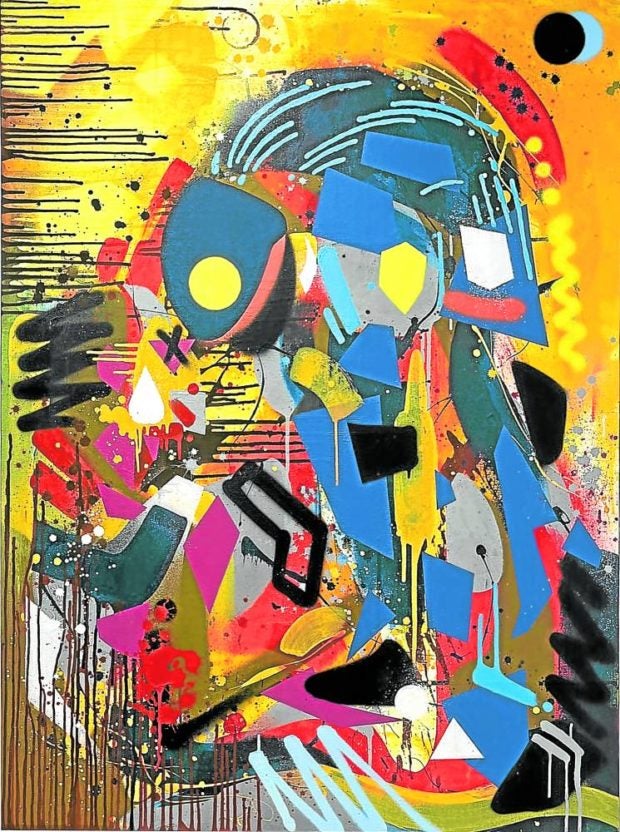