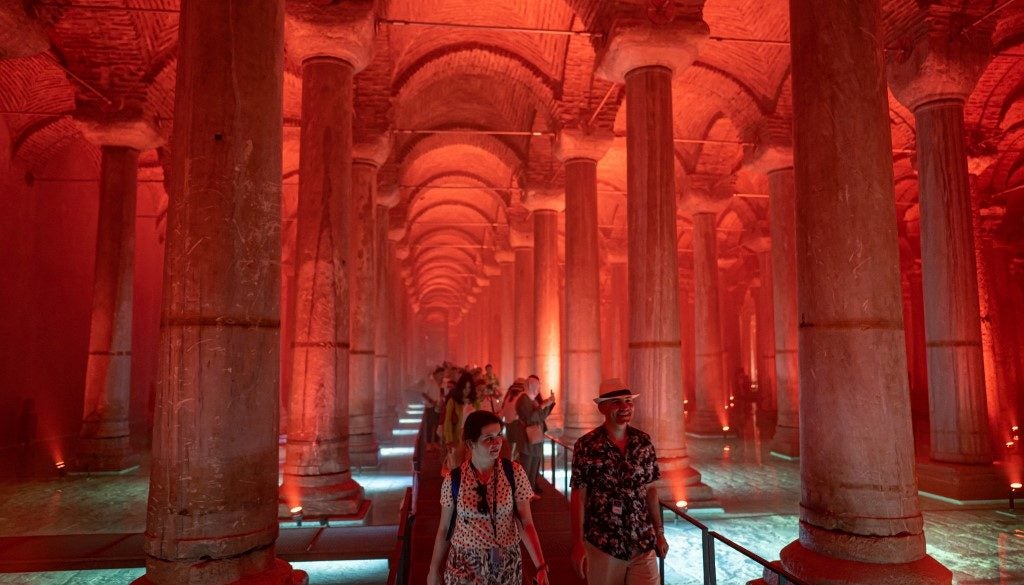 People visiting the Basilica Cistern historic site in Istanbul, Turkey, on July 26, 2022. - Built in 542 and resting near the Hagia Sophia -- then a cathedral, now a mosques -- the basilica was once part of a network of more than 100 cisterns begun by the Romans and completed by the Byzantians and Ottomans to supply the city and its palaces with running water. (Photo by Yasin AKGUL / AFP)

Mystical water underworld of past empires reopens in Istanbul

Istanbul, Turkey — Justinian the Great would have been proud.

The Basilica Cistern he built for the capital of his Eastern Roman Empire in modern-day Istanbul has reopened after a five-year makeover that has transformed the water storage site into a refreshingly cool haven of underground sound and light.

Built in AD 542 near the Hagia Sophia mosque — then a cathedral — the basilica was once part of a network of more than 100 cisterns begun by the Romans and completed by the Byzantines and Ottomans to supply the city and its palaces with running water.

Known in Turkey as Yerebatan Sarnici (“the cistern buried underground”), its rows of water-steeped columns gained fame on the silver screen when they featured in a scene from the 1963 James Bond film “From Russia With Love.”

But the city had to partially close the site for restoration in 2017 over fears the basilica could crumble if the slightest tremor of an earthquake were to jolt Istanbul.

It has been completely shut since the coronavirus pandemic in 2020, allowing workers to strengthen and clean up the 138-meter by 65-meter (453-foot by 213-foot) water palace, said Aysen Kaya, deputy head of the municipality’s heritage department.

Steel rods were stretched across the cornices of the 336 columns holding up the subterranean ceiling, arranged in 12 rows of 28.

The pink brick walls have also been cleared of traces of past, less elegant renovation efforts.

“By scraping off the added layers of cement, we brought the bricks up to date,” said Kaya. She pointed to two pipes exposed by the latest work: one which brought water to the Hagia Sophia, and another to a palace that stood before the sultans built the Topkapi harem next door.

The Basilica Cistern could store nearly 80,000 liters (21,000 gallons) of water, which cascaded down aqueducts from mountains 19 kilometres to the north.

The feat helped protect the Byzantines from summer drought.

The renovation also includes a lower footbridge above the water, bringing tourists within half a meter of its surface. And with improved lighting, the floor is now visible for the first time.

Beyond the structural changes, the basilica has been infused with a mystical, almost spiritual feel with colored lights that shift people’s perspectives and reveal new details.

A famous Medusa head that adorns two of the corner pillars — carved, in accordance with legend, upside down so as not to turn people who lock gazes with it to stone — now looks even more vivid and terrifying.

At the heart of the 1,500-year-old structure, a triumph of the art and techniques of its time, modern works have been inserted for extra effect, such as a grasping hand emerging from the water.

A translucent jellyfish artwork seems to almost dance between the columns, lit up by the rainbow of colors illuminating the dark hall with a gentle glow.

“We wanted a light installation that takes nothing away from the mystical atmosphere of the place,” Kaya said.

The queue of tourists snaking its way to the cistern’s entrance under the hot Istanbul sun is a testament to the restoration’s success.

“I’ve never seen a place like this before, ever. And it will live with me for a very long time.”