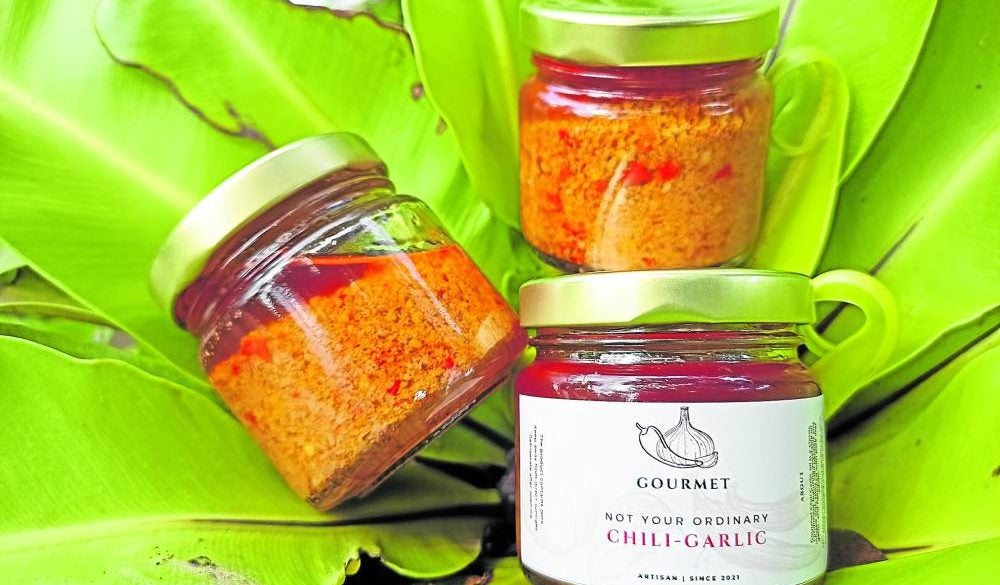 Excess chili from the demo farm in Aurora is made into chili garlic oil.

Instead of disposing of vegetable stalks or overripe mangoes that end up in landfills and emit greenhouse gases, try fermenting them into plant juice or vinegar. These little ways can prevent further damage to the earth and cultivate a lifestyle wherein resources are used efficiently.

“We can start at home by shopping for ingredients and preparing meals that are just enough with very little left,” says sustainability activist Clarence Bulanadi in Tagalog. He is the cofounder and senior executive director of Youmanitarian Service Organization International, an nongovernmental organization (NGO) focused on agriculture development and on cutting down food waste, a top priority of the United Nations’ 2030 Agenda for Sustainable Development.

He invariably quotes the World Food Program (WFP) as saying that one-third of world food production is wasted due to lack of storage in developing countries and impulsive shopping in urban societies. That quantity could sustain 2 billion people—double the number of the undernourished global population.

“If food is not wasted, no one will go hungry. Rural communities send their produce to the urban dwellers, but they themselves eat canned foods and instant noodles,” Bulanadi observes.

The NGO has been working with farmers who are impoverished due to lack of scientific knowledge in storing food and distribution of their goods.

“There’s an oversupply of produce because they don’t know how to market them. They plant according to the demands from the middlemen. When there is an excess, truckloads of vegetables are thrown away. That’s why they don’t earn.”

The NGO aims to teach farmers and fisherfolk how to add value to the glut of foods through preservation and processing. Its ultimate vision is to work with local governments that can help communities prevent the squandering of excess crops.

Meanwhile, the group has worked with women and youth in Dilasag and Casiguran, Aurora, where the fishermen caught a glut of yellowfin and mackerel tuna (tulingan). In partnership with the local governments and the Department of Trade and Industry, the NGO taught the locals how to add value to the surplus fish by making them into tocino (cured fish), tinapa (smoked fish), fish siomai and fish patties.

Bulanadi adds that fish scraps from the markets can be used to make fish amino acid fertilizers.

Youmanitarian has set up demo farms in the provinces that teach sustainable agricultural practices such as vermiculture, the method of making natural fertilizers by feeding earthworms with food wastes from the kitchen and markets. The earthworms’ castings or excretions enrich the soil.

When there was a glut of red chilis at the Youmanitarian demo farm in Casiguran, Bulanadi processed them into chili garlic oil and preserved them in small bottles for pasteurization.

The demo farm likewise taught the farmers and wives through the government’s livelihood platform, Pantawid Pamilyang Pilipino Program. The NGO showed them how to recycle excess rice straws which are usually left lying around after processing. These rice straws are processed into mushroom fruiting bags, the surface material on which mushrooms can grow.

The organization also taught them how to add value to unsold mushrooms by making them into achara (pickles), tocino and tempura.

Bulanadi further quotes WFP as citing a study on how food is wasted on the consumer level when people buy in excess but eventually trash the food. He offers the following tips on how urban dwellers can reduce waste:

• Know the label. When a produce is labeled as “best buy,” it means that it is at the peak of its ripeness. Know when it will expire so it could be consumed immediately. Read expiration dates. They indicate if the product is good to consume under specific conditions.

• Organize the fridge and pantry. First in, first out is the standard of food safety, wherein food is arranged in storage spaces according to the earliest purchase until the most recent. The older food must be reachable and consumed first. The recent foods can be placed behind. Check the time the foods have been kept to guarantee their freshness.

“If we don’t check the foods bought earlier, we might forget about them and they spoil,” says Bulanadi.

Don’t cook too much

• Determine food quantity. “Filipinos tend to cook too much in big meals or gatherings. Know how many will consume so that you don’t cook too much,” he says. “In our home, we cook only enough so there is little left.”

•Be creative with leftovers. The surplus of fried chicken can be made into chicken sisig the following day. The diners won’t feel as if the food was a repeat. Use chicken bones, onion and carrot peels for soup stock, and their remains for composting.

• Eat skins. Certain fruits and vegetables are more nutritious when the skins are on. Potatoes, eggplants, zucchinis, tomatoes and cucumber are tastier when unpeeled. Watermelon rinds can be pickled or stir-fried.

• Make money from overripe fruit. Bulanadi says when there’s a glut of bananas that become overripe, he makes banana bread from lakatan, while overripe saba can be made into banana vinegar. Both can be sold when packaged attractively. Overripe mangoes, papayas and pineapples can be turned into jams and vinegar. When these fruits have been fermented and filtered, the excess mush can be used for compost.

• Use stems to make plant juice. A kilo of stems from leafy vegetables such as camote tops, alugbati, etc., can be chopped, mixed with brown sugar and molasses and fermented for a week. Strain the juice and use it as a nutrition booster for plants.

• Use bokashi fertilizer, which is suitable for small spaces. Bokashi means fermented organic matter in Japanese. With little effort, you can shop or order online a bokashi composting bin and the ready-made microbial inoculant that is applied between layers of food scraps. The juice can be used for fertilizers, while the composting materials are suitable for potted plants. They don’t smell and take up space. —CONTRIBUTED