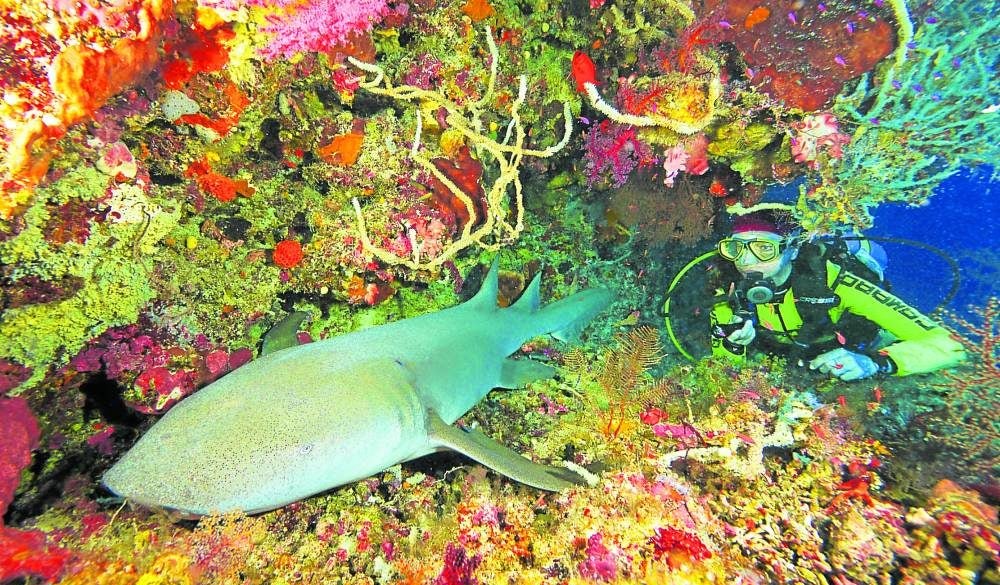 Last March, to the delight of scuba divers, the Tubbataha Reefs Natural Park (TRNP) opened up to visitors for the first time in two years. It was indeed cause for celebration; although the whale sharks didn’t come around to say hello to us on our trip last June (they did for other groups), we on board the dive boat Discovery Palawan were still blessed with the presence of an abundance of sharks, big fish, dozens of delightful bumphead wrasses, and a highlight of the trip, an encounter with graceful mantas, one of which passed and paused right in front of our ecstatic group.

It was also a welcome chance to revisit the Tubbataha Ranger Station in the North Atoll, one of two atolls that make up the reefs in this Unesco World Heritage Site that is easily the most spectacular dive destination in the Philippine archipelago. In fact, just last Aug. 11, the international marine conservation organization Mission Blue, headed by renowned marine biologist Dr. Sylvia Earle, recognized TRNP as a Hope Spot.

The Tubbataha Rangers are a composite group (whose existence, along with that of Tubbataha’s multisectoral management board, was facilitated by President Fidel V. Ramos, recently deceased and already missed), composed of members of the Philippine Coast Guard, the Philippine Navy, the municipality of Cagayancillo, and members of the Tubbataha Management Office (TMO). These rangers rotate on two-month shifts to live in the station on a sandbar, kilometers away from land, going on regular patrols to make sure the reefs remain protected. This time, as divers flocked to the station to buy merchandise, the goods were brought down from storage, and the rangers all kept their masks on as a COVID-19 precaution.

The boys have to be careful, as their ranks were not spared by the pandemic—especially since, even as Tubbataha remained closed, the rangers still reported for duty, did their patrolling, and did the work for the Park’s regular Ecosystem Research and Monitoring Program, when experts made the trip to conduct surveys and censuses of sea birds, fish, marine species, and corals. After all, according to the Park’s 2021 primer, the 97,030-ha park is also an Asean Heritage Park, a refuge for 181 endangered species (including whale sharks and sea turtles) and 80 of 110 of the planet’s coral genera, and one of four East Asian-Australasian Flyway partners meant to protect migratory waterbirds and their habitats. Case in point: the decrease in the population of the endangered Black Noddies on Bird Islet had the rangers building nesting structures on the islet, “virtual ‘condominiums’ where the birds can nest in relative peace and safety.”

Take ranger Jeffrey David, 36, now 10 years with the TMO, and a father of three. David was hit so bad during the first wave of COVID-19, he was intubated and confined for a month, no thanks to some comorbidities, and had to rest for another three months. “But I recovered, and we’re still here,” he says in Filipino. “We even caught some illegal fishermen here during the pandemic, trying to enter the park from other provinces. They probably thought there was nobody guarding this place. But we’re still prioritizing security.”

Meanwhile, Cresencio Caranay, 31, also with the TMO, tested positive before leaving for his tour of duty to Tubbataha, which is why he was delayed for an additional two weeks. “That was one of our fears,” he says in Filipino. “That you would have to stay longer because the weather was bad, or you wouldn’t be relieved on time, because the next shift also had to quarantine and they were strict about people leaving the city.”

This father of two claims his family understands the nature of his work and the long absences, but it got especially difficult during the pandemic. During the four-month diving season, there are usually many visitors, so the lockdowns were particularly lonely. “That’s why we put up a basketball court, so we can get some exercise, and the TMO takes care of our antigen tests.” The rangers’ supply of vitamin C was given by some Tubbataha supporters.

“It’s taking some getting used to, now that we’re open again,” adds David. “We still have to be careful, though.” Also, the rangers, who take care of repairing their now 22-year-old station, felt the full fury of Typhoon “Odette,” which blew away parts of the roof and flooring. In fact, reports TRNP Protected Area superintendent Angelique Songco, a Puerto Princesa engineer has practically condemned the ranger station, declaring that it will not survive another storm like “Odette.”

Which brings us to another issue plaguing these hardworking men. Construction started in 2020 on a new ranger station, as well as a small research station and a helipad, with money from the Tourism Infrastructure and Enterprise Zone Authority and the Department of Environment and Natural Resources (DENR), implemented by the provincial government. Phase 1 has been completed—but Phase 2 can’t get off the ground because the government won’t release Tubbataha’s money. “In the meantime,” says Songco, “that”—she gestures towards the half-built structures, with iron rebars exposed to seawater—“is just standing there getting rusty.”

The money is there, all P87 million of it, P58 million for Tubbataha and P29 million for the Philippine Coast Guard (PCG); at least, it’s supposed to be. In 2013, the USS Guardian, an American Navy ship, ran aground on the reefs. In an article by Matikas Santos published on Feb. 18, 2015 in the Philippine Daily Inquirer, “US pays P87M for Tubbataha Reef damage,” the Department of Foreign Affairs (DFA) confirmed this in a statement. “On 20 January 2015, the Philippine government received from the US government the full requested amount of P87,033,570.71 as compensation for the damage caused to Tubbataha Reef by the grounding of the USS Guardian,” the DFA statement said. “The compensation will be utilized for the protection and rehabilitation of Tubbataha Reef Natural Park, a Unesco World Heritage Site. Portions of the fund will also be used to further enhance capability to monitor the area and prevent similar incidents in the future … DFA also said that the US will help the Philippine Coast Guard (PCG) upgrade their facilities in the Tubbataha Reef area … In addition to the compensation received, the US government is also providing additional assistance to the Philippine Coast Guard to upgrade the PCG Substation in Tubbataha.”

DENR is helping TMO claim the money, which is now with the Bureau of Treasury (BTr), after the bureau asked for a certification from the PCG. It took several calls, letters, appeals to the authorities (including former President Rodrigo Duterte) and finally, a call to Duterte’s Citizen’s Complaints Hotline, 8888, before the PCG issued the certification.

The red tape is because the TMO is not on the list of government offices (read: they do not get any government funding, and subsist mainly on park entrance fees paid by tourists), which is why the DENR is “representing” Tubbataha.

“The money is being held in trust, and DENR is helping us ask the BTr to release it,” Songco says. “BTr must now issue their own certification that the cash is available so the Department of Budget Management can issue a notice of cash allocation to be processed.”

One inevitably wonders whether or not the money is still there, nine years later; the ball is now obviously in the BTr’s court. In the meantime, the rangers recently wiped down the rusty rebars, waiting for the day when construction continues.

During our group’s visit to the station, the half-finished structures were certainly an eyesore. Although the rangers kept a safe distance from the partying divers, you could still see how happy they were to have visitors, as we brought them snacks, soda, and other supplies, lovingly turned over by their “Mama Ranger,” Songco. Ours was the boat’s second-to-the-last trip of the dive season during the Philippine summer, so it was going to be quiet again for a while out on the sandbar.

For now, they were all smiles, despite the rusting beams and flimsy roofing of their precarious, groaning quarters. Surely the Tubbataha Marine Park Rangers, who didn’t miss a beat during the pandemic, deserve a hell of a lot more than this. INQ