‘I don’t care where he goes at night’ | Lifestyle.INQ ❮ ❯ 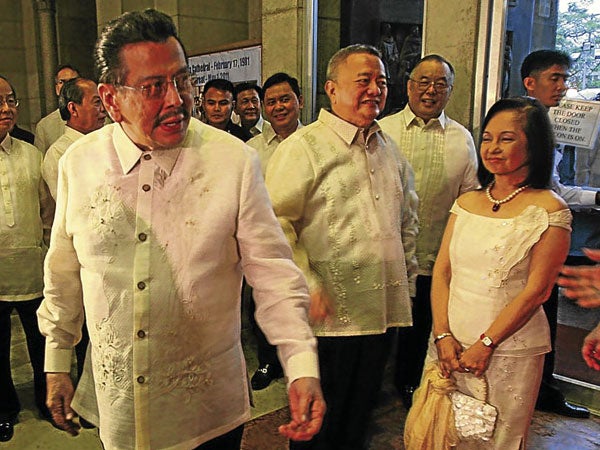 ‘I don’t care where he goes at night’

Sen. Miriam Defensor-Santiago, in a semi-beaded ruby red gown by Inno Sotto, looked every bit the gracious host and radiant “bride”—until it came to the part when she had to renew marriage vows with lawyer-husband Narciso Santiago Jr. at the Manila Cathedral Sunday night.

In contrast to her soft-spoken husband, she delivered an unflinching and emphatic “Yes, I do!” For someone known for her verbal flourish and oratorical style, it was probably par for the course.

With Gaudencio Cardinal Rosales officiating at the couple’s 40th wedding anniversary celebration, Miriam revealed her fiery side that has sent many a poor soul running for cover. The couple’s power guests, led by President Aquino, tried, albeit unsuccessfully, to stifle their giggles.

Yes, folks, beneath all that pomp and circumstance, vintage Miriam was very much in the room.

It seems there’s no middle ground; it’s either you hate her or, in Miriam’s own words describing actress Heart Evangelista, her maid of honor, “love her to bits.”

Despite the age gap, Miriam personally chose Heart for sentimental reasons. Her late son AR had a crush on the pretty young actress, who was looking visibly thin in a beige corset, also by Sotto.

But, as a testament to her political savvy, you’ve got to hand it to her for being able to stage a casting coup, the likes of which no one has seen and, perhaps, will ever see in Philippine politics and business.

Joining them, as principal and secondary sponsors or as part of the entourage, were such industry titans as Tessie Sy Coson, Manny Pangilinan, Danding Cojuangco, Emilio Yap, Felipe Gozon, Oscar Lopez and Inquirer chair Marixi Prieto.

A few seats away from Vice President Binay was his defeated rival, newly appointed Transportation and Communications Secretary Mar Roxas, who came with broadcaster-wife Korina Sanchez.

It was also proof of how politically adroit the couples’ guests were. Not only did they appear civil to one another; for a moment, they looked conciliatory, even chummy, as they extended greetings of peace during the mass.

Despite her vocal support for the RH Bill, the bride got communion from Rosales. We will never know if the good cardinal would be as charitable to the President, as P-Noy (President Aquino), also a vocal supporter of the Bill, opted not to receive communion.

But his predecessor, now the subject of numerous graft and human rights cases, seemed to have no trouble grappling with her conscience as she lined up with the VIP guests come communion time.

With the exception of President Aquino, Binay, Roxas and several senators, the Santiagos’ high-caliber guests later broke bread with them at the newly refurbished and well-lit Centennial Hall. Additional ceiling treatments in the form of dangling pailletes seemed to echo the silver-edged tassels that adorned Miriam’s sleeves.

“I’m gratified that my efforts to have every single president in our country, except the one who cheated me, have been affirmed by their presence,” she said in an informal interview with journalists at the end of the reception.

The alleged cheater, whom Miriam, perhaps until her dying day, refuses to forgive, of course, is former President Fidel Ramos.

“Their willingness to bury differences in politics to show a united front in our country is a manifestation of a sense of shared destiny,” she said. “That is, I think, the message of tonight.”

Except in the case of FVR, the senator seems to practice what she preaches. She and Bettina Aboitiz, the woman she berated on national TV during Estrada’s impeachment trial more than a decade ago for allegedly distracting her, have chosen to bury the hatchet (thankfully, not in each other’s backs).

Aboitiz, in a beige off-shoulder column with an embroidered and translucent white overlay by Sotto, was one of the Mass’ “offerors,” together with Executive Secretary Paquito Ochoa Jr.

Monsoon rains failed to dampen the senator’s spirits as she entered the church with Jun. Instead of immediately lining up, as the wedding procession was about to begin, Miriam used every second to exchange pleasantries.

Like the political animal that she is, Miriam worked the room as she buzzed from one group of guests to another, as if they were her long-lost friends.

President Aquino skipped the procession, and quietly slipped out of nowhere into his seat opposite Evangelista’s.

The senator, with husband Jun, was equally poised as the couple greeted arriving guests at the Centennial Hall.

In her desire to do away with professional entertainers—“to cut down on cost,” she said—she even convinced some of her guests to sing live with only the piano accompanying them.

Upon seeing so many “exes” in the room, Erap described himself as the man with perhaps the most exes.

He obliged the couple with Robert Goulet’s “Always You,” and not with Engelbert Humperdinck’s “Release Me”—the secret, he said, to why he and former Sen. Loi Estrada reached their golden wedding anniversary. Loi simply won’t release him.

Indeed, if Erap were a hired entertainer, the Santiago couple got two for the price of one: a comedian-cum-singer.

“I’m an ex-movie actor, ex-mayor, ex-VP, ex-president, ex-detainee, and even an ex-convict,” he deadpanned, to the crowd’s laughter. “No one can beat me here. But why do you want me to sing, I’m not an ex-singer?”

Imelda expressed no such qualms as she sang Perry Como’s “I Want to Give” before segueing into a Waray song especially dedicated to the bride, also a fellow Visayan, albeit an Ilongga.

Jinggoy gamely pinch-hit for the missing P-Noy, who had already reportedly practiced his duet with Heart, said Miriam. “Pressing business” forced the Chief Executive to skip the reception and, perhaps, spare the audience.

Like his father, Jinggoy described his feelings for the feisty fellow senator as a mixture of awe and fear. The former movie actor and Heart sang “Unforgettable.”

Imelda also raised a toast to the couple’s health and continued happiness. As the tinkling of glasses grew louder, Miriam, instead of obliging her guest with a kiss from Jun, flung both hands up in a gesture that said: “Forget it!”

“I don’t ride roughshod over him. I don’t care where he goes at night,” she added. “He doesn’t have to call me with his itinerary. I just presume that he’s going to be loyal to his marriage vows. And I’ve been extremely faithful to my husband.”

On plans of a honeymoon and why she didn’t succumb to pressure from all those tinkling glasses, Miriam, with characteristic wit and self-effacing humor, said she’s no longer as young as Evangelista.

“I’m not a blushing bride. I’m not going on a honeymoon. I’m a veteran wife,” she said before breaking into laughter. “I think that’s too sappy for someone my age. Maybe if I were 20 years younger or as young as Heart Evangelista, it would be endearing to kiss in public. But if you do that at my age, I think it would be disgusting.”