“ME DEDÍCO a la musica,” (I have dedicated myself to music), Rosalinda L. Orosa, music critic and essayist, once told me when I asked her why she no longer wrote drama and dance reviews.

Along with some relatives, Rosalinda (Baby or Tita Baby, depending on the age of her interlocutor or friend) is one of those to whom I still speak in the language of Cervantes and Gabriel García Márquez (the latter, by the way, is considered “the new Cervantes”), if only not to forget this language passed on to us by our parents and grandparents. 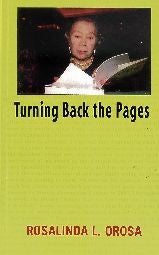 Speaking of Spanish, in her latest book (“Turning Back the Pages,” Manila Times Publishing), Rosalinda quotes Don Claro Recto, Father of Modern Philippine Nationalism, as saying that Spain’s legacy to the Philippines is “this immortal trilogy: religion and its most transcendental result—the consciousness of our country as a country; the family institution; and the Spanish language.”

In another essay, the author quotes, this time, Doña Aurora Aquino (a Spanish-language professor and grandmother of P-Noy) as saying that “the Trappist monk Thomas Merton contends that praying in Spanish is the best approach to God.”

The range of this book is remarkable, and will surprise those who only know the author through her music reviews, light essays and profiles published in book form.

Here we have essays, speeches; profiles (of Rizal, Laurel, Lopez and Sanso); short stories, poems and light verses, literary exercises; “humor in various guises,” cartoons; letters paying tribute to the author, by prominent persons like historian Serafin Quiason; and, as a coda, a photo album.

Rosalinda’s gentle, piquant sense of humor is evident in a poem written way back during the postwar period: “Here’s to GI Joe/ He’s not so bad you know/ With his wit or brogue or slang/ But still… we’d be glad to see him go.”

In the final analysis, however, Rosalinda’s claim to fame lies in her erudite music reviews, deliberately excluded from this book to give it a “timeless” appeal.

Former French Ambassador Olivier Gaussot hit the nail on the head when he described the author thus:

“As a critic, aware of the demands of artistic creation, your approach avoids exaggerated praise or debunking. If you point out shortcomings or weak points together with the strong, your aim is to encourage the artist to push forward even further toward the point of perfection.

“False notes played during a concert do not escape your attention, but you do not hesitate to write that faults ‘committed’ by a talented and impassioned pianist are preferable to the technically perfect but soulless execution of a musical score.”

“Turning Back the Pages” is a grand lady’s summing up of her accomplishments down through the decades. And still counting.

“Turning Back the Pages” is available at Solidaridad Bookstore, Ermita, Manila; tel. 5255038.