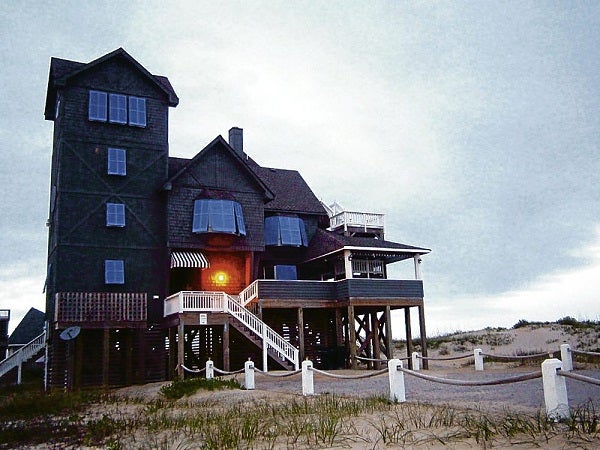 A place synonymous with love, romance and sad endings need not be so if you choose it to be

RODANTHE, North Carolina—The gulls welcome you as you cross a suspended bridge that connects to the Outer Banks of North Carolina. It’s the very same road that Richard Gere navigates in the film “Nights in Rodanthe.”

Yes, after two and a half years of planning, dreaming and praying, I finally made it here.

The Outer Banks is a series of barrier islands that jut out off the coast of North Carolina. It’s a collection of sandbars, really. The islands from north to south are Northern Beaches, Roanoke Island and Dare Mainland and Hatteras. These islands are now connected by a series of bridges, each one with its own history, geographical features and distinct culture.

Though majority of the islands are lovely and serene, island lore says that some of the villages are where Blackbeard and his band once roamed.

Rodanthe is one of the quiet villages on Hatteras Island. Hatteras itself stretches nearly half the distance of the entire Outer Banks. Cape Hatteras national seashore has so much undeveloped beach wilderness that is spread out along seven communities. It is the first national seashore in the United States and includes natural and historic attractions, such as lighthouses; the tallest in the country—Cape Hatteras lighthouse—can be found here.

Interestingly, Rodanthe is home to the Chicamacomico Lifesaving Station, the first such station established along the North Carolina coast. The US Lifesaving Service eventually became today’s modern Coast Guard. Thus, when you think about it, the US Coast Guard was essentially founded in this tiny village.

Dotted by lighthouses and surrounded by undulating bodies of water, it is a wonderful place not only for romance, but solitude as well. A sanctuary where you can easily reconnect with a loved one, or reconnect with yourself. And yes, you don’t need Richard Gere to fully enjoy the beauty that surrounds you.

Imagine endless stretches of natural beaches, sand dunes that hug the road and the shore, and the bluest of skies.  On one side you have the Atlantic Ocean gently roaring on the east where the sun rises and nudges you from your slumber, while on the west you can find the vast shallow bay of Pamlico Sound where a fabulous sunset closes the end of each day.

The morning my friend Tessa and I were there, it was shrouded in mist. We had arrived the evening before and made a pilgrimage of sorts to the house where the film inspired by the Nicholas Sparks novel was shot. The classic dark-gray house, with blue shutters all around, stands about a kilometer away from the Atlantic Ocean. Her name is Serendipity—the place where Diane Lane and Richard Gere found their second chance. It’s now a vacation home, rented out to visitors, and is booked solid for the next five years.

We were blessed to have visited the island during an off season, so everything was quiet, and thus it was easier to hear oneself. From the bedroom in our B&B (bed and breakfast), we could watch the seagulls soar above Pamlico Sound, and hear the waves lap against the shore.  On the dock, pelicans sat side by side, shooting the breeze, with not a care in the world.

Rodanthe, like the other villages on Hatteras, is dotted with small, soulful seaside cafés and restaurants and mom-and-pop stores laden with character. There were very few stores open, since vacation season has not yet begun, and so we had the island practically all to ourselves.

One thing I’ve found out is that you can actually find your own Rodanthe; a place synonymous with love, romance and sad endings need not be so if you choose it  to be.

The visit here was also an excellent reminder about the endless possibilities of life and how one must never cease to dream, hope and strive for goals, age notwithstanding.

If one dreams it, works for it, and the dream is part of His plan for you, it will be. It’s important to always remember that the destination is never the end point, and the detours and U-turns that one sometimes has to take are a crucial part of the trip.

It is in the gentle unfolding of each day, the joy and magic of discovering new things, sights and people on the journey that the miracles take place.

On our way out of Rodanthe, I saw a sign about a mile away from Serendipity that read, “Dare to dream the impossible dream,” and, cheesy as that may have sounded, I could not help but smile.

Later on that day, at Wright Brothers National Memorial at Kitty Hawk, North Carolina, I was reminded about the daring and courage of two men who showed us all how dreams can take flight, literally. And as I write this piece, I break open a fortune cookie that delivers the message, “Make your dreams a reality.” Now, if that isn’t serendipity, it’s certainly a divine message worth heeding.