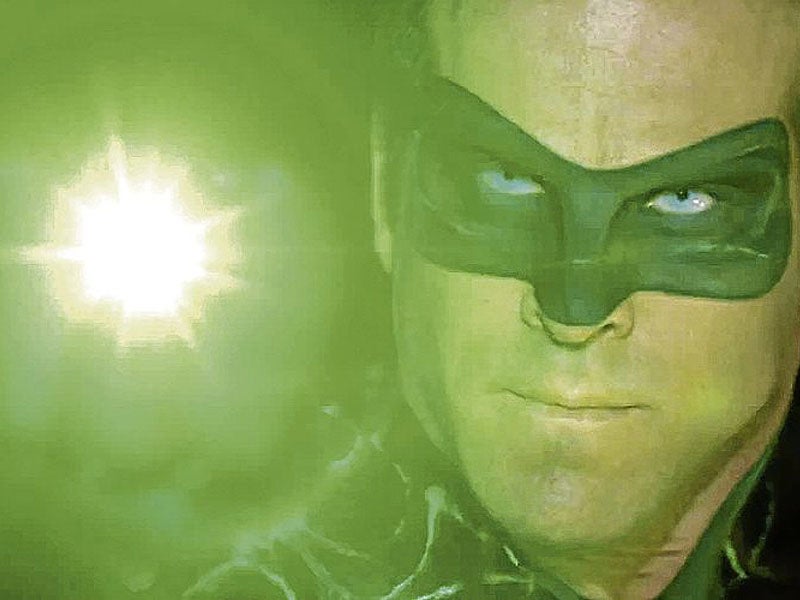 Ryan Reynolds: The actor behind the green mask 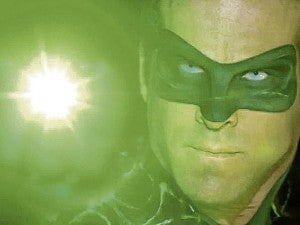 Just as character Hal Jordan is chosen as the first human to wear the Green Lantern ring, Ryan Reynolds, as the first actor to bring Green Lantern to the big screen, knew he’d have an entire legion of fans looking to him to live up to the oath.  He didn’t let the parallels get to him as he relished playing the dual role of irreverent, high-flying Hal Jordan and his superhero-in-training counterpart.

“What I love about Hal is that there’s nothing extraordinary about the guy,” Reynolds says of the Green Lantern Corps’ unwitting draftee.  “Of course, he’s not necessarily your average human being, in terms of what he does for a living, but for the most part, he’s not an exceptional example of his species.  He’s just a guy, and a fairly irresponsible one at that, though there are, of course, reasons for his reckless behavior.”

Those reasons stem back to his youth, but have remained unresolved—purposely ignored, really—until a little self-examination is forced upon him when out of nowhere he’s chosen for this higher calling.  Throughout the course of the film Hal will have to look a little deeper into himself, but when this gift is initially bestowed upon him, all he can really think besides, “Wow, how cool is this?” is, “Why me?”

Though Hal may wonder why the ring chose him, “Why him?” was never a question the filmmakers asked themselves in casting Reynolds for the part.

“Ryan is a superb actor,” director Martin Campbell says.  “He also physically looks the part, is charming, funny, and has a great sense of decency.  I knew he could easily pull off both the undisciplined, shoot-from-the-hip maverick that is the Hal we first meet, and the fearless and focused fighter he’ll have to become if he’s to save the day.  Ryan did it all; his performance really sets the tone for the movie.”

What makes Green Lantern different from other super hero films?

Ryan Reynolds: It’s a character that is chosen in a way as opposed to choosing, to carry this responsibility. And with that comes a lot a great struggle. What makes the primary difference is that you have a storyline that is both a space epic and earthbound as well. Which I think is really interesting, opening up to so many possibilities in the future. Specifically ’cause we could be anywhere ’cause this universe is so vast and there’s untold storylines that you can mine for good stuff.

What about the workout regime to become the Green Lantern?

Not really that different from other action movies except maybe the wirework and gymnastics which I’ve been working on for about 9 months. A 6’2” person is just not meant to tumble, but they’ve been doing the best they can and I’ve certainly acquired a whole new skill set that I thought I could never have.

What does it mean for you to be on a movie like this?

Besides the crippling pressure? I think it’s exciting, especially this particular character, that’s what I focus on. If you’re the studio you have larger set of priorities. What attracted me most of this character is that he’s Indiana Jones or Han Solo in space, wait Han Solo was in space (laughs). It felt that it embodied those characteristics and I loved that and I felt that I hadn’t seen it in awhile.  The tone is something I find interesting and distinguishing from other ones.

How did you become two super heroes of the comic world?

Both films are very different and super hero movies are so pervasive in pop culture that I don’t really look at them as super hero roles as opposed to just “roles.” Deadpool is about a guy in a highly militarized shame spiral. Whereas Green Lantern is something much different, it’s a much more universally themed action epic.

Were you familiar with the original material of Green Lantern?

Not as familiar as I was with other comic books, but it was fascinating once I dove into it. Particularly Hal Jordan and Green Lantern, I visited the art department when I met Martin and that’s what really sold me. I went to go meet him and I wasn’t expecting anything, I was a fan of his work, I didn’t know much about Green Lantern. We had a great meeting and we talked about 1 and a half hours he took me on a tour of the art department. Particularly the stuff that Grant Major (production designer) was working on and I found it to be incredible. The art was pretty compelling stuff. 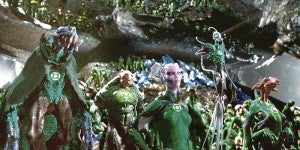 We did several scenes from the film. I’m glad we did, everyone gets pretty nervous when you do an audition, but what I love about that is that you really feel like you’ve earned the role as opposed to being offered it based on some other strange financial reason for the studio. You feel like you went in there and got dirty and went after something. I auditioned twice for it.

[Director] Martin Campbell mentioned that he worked quite a bit with you on making the dialogue and tone your own, was it nice to work with a director who is so collaborative?

Yeah, I’m pretty reticent to say that I adlib everything, I don’t do that, no one really does that, they say they do, but they don’t. A lot of that stuff is pre-meditated. I like to write 4-5 versions of a different line or joke and you throw it against the wall and they can use what they want. For me it was less about finding the joke, Hal Jordan has tremendous wit, he shouldn’t be about being funny, he’s not a comical in any way. He’s just acerbic and that works in tandem with that cocksure test pilot attitude that he has. So that was the thing we were searching for in terms of tone. I don’t think you can do a movie like this in the tone of Dark Knight. It has to have a bit of levity and light in this as well, which I feel walks that fine tightrope tone. We found it really early on, cause it’s terrible to find it halfway through shooting, there’s no feeling to make you feel any sicker than that. So we found it early on in rehearsals and we said “that’s the tone” we got to bring that throughout the movie.

Do you relate to Hal’s will power?

Yeah, I think I have a lot of will power, that’s probably my strongest asset. Sometimes I think I can probably outdiscipline everyone and I think I get it from my grandfather who was an incredibly focused guy. This work that we do, there’s so much riding on it, you hear about people who flush it away, but you have to take it incredibly seriously and focused. You have to have that attitude 24/7. When you’re done shooting then you go and goof around and do what you want, but I’m here to work and I wouldn’t have it any other way.

Are there some scenes more difficult than others?

Some of the action sequences are more difficult, because they have to embody the same tone as the film. And there’s something really raw about them, so you have to find that. You get kind of intoxicated by all these polished fight sequences in films and Martin doesn’t work like that. Really kind of making sure that it’s ugly, raw and real. So when Hal Jordan or Green Lantern takes a hit, it looks like it actually hurts. And making sure that it’s imbued in all the action sequences is definitely a challenge.

Will they let you keep the ring?

They better! (laughs) I’ll be leaving with one. The ring was a work in progress until the last second, but I’m really happy with it.

Do you have any martial arts background?

No. My dad was a boxer and I’ve trained for movie roles, but I would never profess to be a master in that realm. I’m more or a martial finger painter (laughs).

Is there a message to “Green Lantern”?

I think the message is that fearlessness and courage are two different things. Fearlessness is a by-product of an insane person, courage is something different, it’s a way for Hal to empower and that’s also what separates him from the other Green Lanterns. It’s what creates the greatest Green Lantern of them all.