Rector was once an ‘Hospicio boy’ | Inquirer Lifestyle 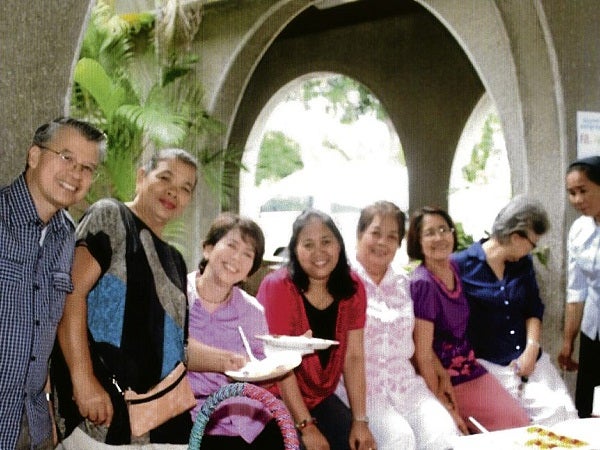 Rector was once an ‘Hospicio boy’ Today being Easter Sunday, I will share an Easter story. Easter brings hope and happy endings, and certainly this story lifts the human spirit.

It tells of how a mother left her children in the care of the nuns because she couldn’t do it on her own, being an orphan herself. And so it was that when Rev. Fr. Victoriano Comia  Torres, CM,  told me that he  was an alumna of the Hospicio de San Jose, I just stared at him. He is now rector and parish priest of the National Shrine of Our Lady of the Miraculous Medal in Posadas Village.

F.ather Vic was at the Hospicio de San Jose last March 19 to concelebrate with Bishop Emeritus Teodoro Bacani   the 6 p.m. Mass. March 19 was the feast day of St. Joseph.

As we  waited for the processional of the Mass to begin, Father Vic  related how he was brought to the Hospicio when he was nine, while his six sisters (there were seven of them) were admitted at the Asilo de San Vicente de Paul. His mother, Amparo Comia Torres, was an orphan and had no relatives to leave them with.

Father Vic calls himself an “Hospicio boy.” Hospicio de San Jose is the home for abandoned children and the elderly, those without families and are left to live in the streets. It is also the boarding house of the wealthy elderly, left by their families for their own reasons.

Father Vic, now a Vincentian priest for 37 years, says: “It was summer of 1957 when I was brought to Hospicio de San Jose. I was nine then. Having been born and raised in a farm in Malvar, Batangas, I was actually excited to leave for Manila. To this day, I am still in touch with my Hospicio friends and manage to see them whenever my schedule allows.

“After finishing elementary school at Hospicio, I felt so privileged to have been sent by the nuns to Don Bosco in Mandaluyong for  high school. Everyday I had to wake up early, have breakfast after Mass, and take a ride to school. I remember being given 30 centavos for my round-trip fare plus a packed lunch everyday.

“At Don Bosco, I was enrolled in a class in electro-mechanics. I loved ice cream very much. But I had no extra money. One day, to quell my desire for ice cream, I used the remaining 15 centavos for my fare back to Hospicio. That day, I had to walk back home from Don Bosco Mandaluyong. With my little feet, it took me more than an hour to get back to Hospicio.

The call to the priesthood

“The sisters were like mothers who took good care of me and my needs. I do not know what they saw in me,  but I was often asked by them if I wanted to enter the seminary. At that very early age, I did not understand much what it meant, although I was interested to try.

“My stay at Hospicio was only five years, but my ties to them grew deeper because I had considered it my home. I always went back to Hospicio on my vacations from the seminary and, of course, it was the sisters there who provided for all my needs. When I was accepted in the seminary, it was cause of joy for both the sisters and my family.

“After ordination on March 9, 1975, I had my first Mass at Hospicio de San Jose. The sisters’ care, encouragement and prayers were a constant source of inspiration and support through my years of formation and even  today in my priestly ministry. But more important, I believed that at an early age, the training I got at Hospicio shaped my core values of love and service for the less fortunate, which comprise the heart of the Vincentian missionary. My mother once told me that she consecrated me to St. Joseph because I was born on March 6. St. Joseph has always been my protector, and Hospicio de San Jose will always be home for me.”

Things have changed at the “Mental Hospital.” Fr. Greg Esquillo, the chaplain, saw to it that the patients and their relatives observed the Holy Week, including the “washing of the feet of the apostles” and the  procession  to put the Eucharist in the “altar of repose” inside the Our Lady of the  Miraculous Medal Chapel.

And there was even a “salubong” this morning  with the help of Barangay Mauway officials. Masses today, Easter Sunday, are at 9 a.m. and 5 p.m. Dr. Bernardino Vicente is director of The National Center of Mental Health (“Mental Hospital”).   Located on 9 de Febrero, the center has Masses Monday to Thursday, 9 a.m., for patients and their relatives; and 12 noon, for employees.

Father Greg is known in Mobo, Masbate  (where he is from), as Padre Tanoy (named after his Lolo Tanoy). He was ordained with Fr. Emerito Castillo on Oct. 17, l998, by then Masbate Bishop Joel Baylon at the San Nicolas de Tolentino Parish in Mobo. Both priests finished their Theology studies at Our Lady of the Holy Rosary in Naga.

A kidney donor for Merk

Readers have been helping 22-year-old Merk Esquillo, nephew of Father Greg, with his  regular dialysis. The good news is that Merk’s younger brother, Gerald James Esquillo, a former seminarian, has offered to donate his kidney to his brother.

Final medical tests will be done at National Kidney Institute on April 13.  Let us pray that their kidneys match and that  there will be money for the procedure. This we ask in Jesus’ name. Those who want to help can text Myra Esquillo at  0929-6962071. Thank you for your kindness.

The Our Lady of Medjugorje Prayer Group, in Queen’s Row in Bacoor, Cavite, will pray the 2000 Rosaries on April 14, 8 a.m., at the Mt. Carmel Chapel in Camella North Springville in Bacoor, Cavite. For details, please text Letty Zapanta at 0918-5047810. Happy Easter to all!