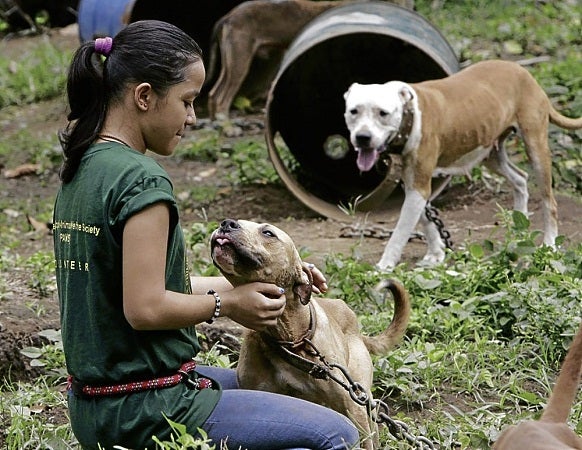 Talk about shameless. Animal welfare advocates are incensed over the recent raids on yet more dog-fighting facilities in San Pablo and Calauan, Laguna, where over 300 pit bulls were found living under atrocious conditions. Several already had to be euthanized by animal welfare groups such as the Philippine Animal Welfare Society (PAWS) because of illness, wounds and failing health.

The clincher is, the people behind this are the same Korean nationals who were arrested last Dec. 3 at another dog-fighting facility in Indang, Cavite. In short, the criminals—who were fined P5,000 after Indang, a mere  slap on the wrist, as mandated by the virtually toothless Animal Welfare Act—didn’t even bother to flee, knowing they would go scot-free in a few days, and simply moved their big bucks operation to another place.

If this flagrant disregard for our law, no matter how flimsy—both dog fighting and online gambling are illegal  in Korea—is not enough to make even the disinterested Filipino’s blood boil, we don’t know what will. These greedy foreigners know that, with the help of Filipinos who protect them for money, they can carry on like nothing happened.

You ask: Which local authorities are coddling them, as they are so brazen and obviously fearless? What is the Korean Embassy doing about this, when their citizens are so shamelessly breaking the law and giving even decent Koreans a bad name? And what will happen now to the dogs?

It took much love, resources, and the work of tireless volunteers and animal rights activists to get the Cavite pit bulls to a safe place; there is little manpower and resources now for these many animals, but the volunteers are not giving up, and more citizens are getting looped in because they’re mad as hell.

Already some dogs in San Pablo have gone missing, just like the “adopted” Indang pit bulls that have apparently been returned to the dog-fighting ring by paid operatives.

And now, a new Philippine distinction: Foreign publications are calling it the world’s biggest dog-fighting operation. Well, what do you know: It’s really more fun in the Philippines for scumbags like these.