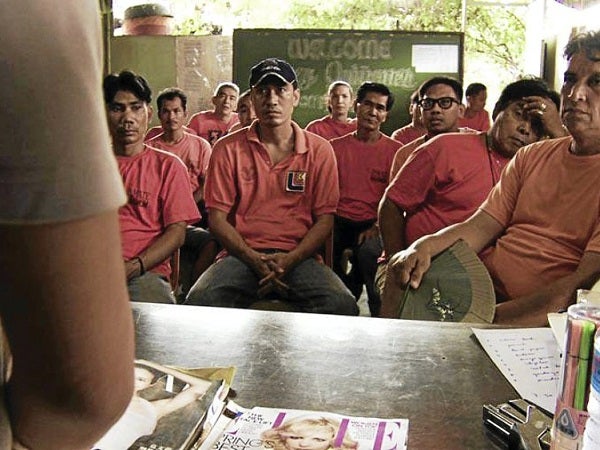 Puey Quiñones– from runway to redemption

It was a scandal of epic proportions.

In February last year, fashion designer Puey Quiñones was caught trying to pass off a department store-bought jacket as his own creation. Shea Gamboa, the furious bride-to-be whose groom Jhon Maala commissioned the suit for their wedding, tweeted about what people soon referred to as “a fashion scam.”

Within hours, the tale of retagging had become a full-blown controversy that brought the designer to his knees.

Growing up in Samar, Quiñones did not dream of becoming a fashion designer.

“I didn’t even know what fashion was. I grew up in a small town. I was older than 10 when we got our first TV.”

He had visions of being on the center stage but he wasn’t sure how.

“I tried singing, I joined contests. But puberty hit and my voice changed. So I tried dance. Then I said, this is it. I’ll become a teacher, I’ll teach dance.”

But his father, a policeman, had other plans for him.

“He asked me to take up Political Science. I think he was hoping na magiging straight pa ako.”

After three years of Political Science at University of Eastern Philippines, Quiñones wasn’t happy at all. He heard that his aunt, who was based in Manila, was going into partnership with fashion designer Dennis Lustico.

“I asked her, can I just work for you? You don’t have to pay me. Gusto ko lang lumayo.”

He made the big move to Manila and started earning money by volunteering to wash his aunt’s car. Soon, he started working for Lustico.

“I was his assistant. I was very happy doing that—working on the finishing touches, sewing the buttons, answering the phones.”

Although he was starting to feel the urge to create his own designs, at first, Quiñones resisted. “I always thought fashion was only for rich kids.” But then he started to sketch. “I sketched every day tapos nilalagay ko sa table ni  Dennis  para makita niya.”

When Bergamo CEO Mel Meer was looking for a designer, Lustico told Quiñones that he was ready.

“I submitted my sketches and Mr. Meer loved it. I was so happy but nervous,” Quiñones recalls.

Quiñones was just starting. He joined competitions and won over clients and fashion editors with his bold, dramatic and unorthodox designs. His clientele, who included celebrities, grew exponentially. Ironically, it was the fame that he worked hard for that led to his downfall.

“I went overboard. I felt untouchable. Hindi ako babagsak. I was having a great time, I had a fabulous life. Lahat kaya ko. Nasusunod lahat ng gusto ko. Anywhere I wanted to go, I could go. Anything I wanted to eat, I could eat. I felt the power. I abused it. I came from nothing, then I had so much. I was living beyond my means. I didn’t know how to control it anymore.”

Perhaps with that power came the feeling that he could get away with anything. Then, the scandal.

At the height of the controversy, Quiñones issued a public apology. He paid Shea and Jhon almost P200,000 in refunds and damages.

But his troubles were only beginning. “I lost a lot of clients. I lost a lot of money. I lost projects. Brides canceled their orders and asked for refunds. I said I’ll try to refund as long as I can. I did it and I was willing to face the consequences.”

Quiñones’ mother, a teacher, came to his aid. “She was the one who produced money to refund my clients. She took out loans. I realized, wala talagang tutulong sa ’yo kundi family mo.”

Quiñones says practically everything he’s earned has been used to pay off debts. “The whole year, I had no income. But I’m dealing with it. I’m not running.”

The scandal took a toll on him. “I got depressed. I couldn’t design. For months, I couldn’t go out of my room. I couldn’t eat. I was just crying and praying every day. I couldn’t afford to see people. I couldn’t go to the mall. I kept thinking, what about my fabulous friends? My fabulous lifestyle? What about the parties? Hindi na ako mai-invite sa social gatherings.”

But after weeks of reflection, Quiñones’ priorities changed.

“Before this happened, I was not a religious person. I was very modern. Pero sobrang nag-iba yung mundo ko. One day, I went to church and said, ‘Okay, Lord, pagod na ako.’ I was tired of dealing with the controversy, the criticisms, the people bashing me. I deserved it, I accepted it. I didn’t blame anybody. But I was ready to face a new life. I wanted to surrender.”

That moment, which came six months after the scandal, was pivotal.

“Doon ako nagkaroon ng strength ulit. I said to God, I am willing to lose everything, just give me back my peace. I was ready to give up fashion. I was ready to go home or go to another country and start a new life. When I surrendered, gumaan yung pakiramdam ko. I said, Lord, Ikaw na bahala sa akin. Just give me the right direction, give me what you think is best for me.”

“After that, something good happened—my documentary.”

Quiñones didn’t think it would push through, given the scandal.

When director-producer Chun Kit Mak and producer Tom St. John Gray called Quiñones to express their desire to continue filming, he thought they hadn’t heard about the controversy.

“We met and I told them, I want you to know I’m going through something. And they said, we know.”

Mak and Tom first got in touch with Quiñones two years ago. They wanted to film his work with the maximum security inmates at the New Bilibid Prison in Muntinlupa.

For four years now, Quiñones has been spending Tuesdays teaching inmates about fashion, dressmaking and tailoring. It was his uncle’s missionary friends who first invited him.

“They gathered mostly gay inmates. They were older than me and the only designer they knew was Pitoy Moreno. They were probably thinking, ‘Sino tong baklang maliit na to?’ But when I was leaving, when they were saying goodbye, nung nakita ko yung mga mata nila, may kumirot. Hindi ko ma-explain. Pero ang bigat-bigat nung palabas ako ng Bilibid. Parang meron akong calling na bumalik doon.”

He kept coming back, spending the entire day with the prisoners, teaching them about fabrics, how to sew.

“It felt like a vacation for me. I was so relaxed there. Yung takot ko turned into peace.”

Over the years, he developed a close relationship with his students. “They feel more like family. I always bring them food. They love my pasta. I bring them scampi or my pasta aligue. I bring them my famous humba or adobo.”

Every year for the past three years, Quiñones has held Project Bilibid Runway, the fashion show-slash-competition that showcases the inmates’ design prowess.

“I look for sponsors, I ask my model friends to join and they do it for free. These models, they tell me, “Next year, kunin mo kami ulit ha.”

Quiñones’ visits to Bilibid stopped when he was trying to recover from the scandal. His return to the prison months after was emotional. His eyes welled up with tears as he shared, “They knew what happened but they never asked and they never judged. Meron silang letters na binasa in front of me. Hindi ko ine-expect yun. Naiyak talaga ako.”

The prisoners treated Quiñones like he had treated them. “I never asked about their crimes. I am not a judgmental person. Ayoko malaman. I didn’t need to know, as long as walang ginagawa sa aking masama. I was happy making them happy. Sabi ko nga, feeling ko it’s safer inside (the prison) than outside. Kaibigan ko sila.”

His Bilibid project has gotten a lot of attention from media here and abroad and has been run on BBC, Al Jazeera and CNN.

The documentary, titled “The World’s Most Fashionable Prison,” was filmed late last year and has already started making the rounds of film festivals abroad.

Last week, it was declared as one of the best documentaries at the 2012 Gold Kahuna Awards in Honolulu. It’s getting a lot of buzz and has been pegged as one of 2012’s must-watch documentaries.

“The World’s Most Fashionable Prison,” conceived to chronicle the inmates’ redemption through fashion, became Quiñones’ story of deliverance as well.

“I can relate to the inmates more now because nagkasala rin ako. Mas naging close ako sa kanila. We all need the same thing—a second chance.”

Aside from his work in Bilibid, Quiñones has found solace in food.

“Food is my life. Kahit wala akong damit basta meron akong food. I traveled for food, not for fashion. I can make fashion, I create fashion. But food feeds me, food feeds my soul.”

Quiñones, who has always loved cooking for his family and friends, has decided to launch a food business with his business partner Andrew Rivera.

“We’ve started catering. Our first food client was Bonnie Tan. We did lunch for Maureen Disini, lunch for Candy Dizon, dinner for Kate Torralba. We will soon be offering Samar food at Mercato Centrale.”

He is also accepting reservations in his home in Makati. “I want people to experience Puey’s Penthouse—I want my friends and clients to experience the food, the music. They’ll book, come here and I’ll surprise them with good food.”

He is also busy with fashion. “Para akong grade one ulit, para akong nag-start ulit. I love it. Parang love at first sight… And now that I have no sewers, I’m the one designing, cutting the pattern, draping, sewing.”

Quiñones says the past year has taught him a lot of lessons. “We are the master of our own life, we make our own life, good or bad. We are responsible. I learned to face my mistakes and I’m moving on.”

Although it was hard, Quiñones says he has learned to treasure everything he’s gone through.

“It made me a real person and a better person. I’m stronger now. Kahit anong mangyari sa akin, I’m not scared. I’m free, finally. Every day I feel excited. It’s a new day, a new life. Kung anong darating sa akin, kailangan kong maging kuntento. I don’t want to ask for anything. I may not have enough money but I’m happier now.

“I have a favorite quote from ‘Eat Pray Love.’ ‘Ruin is a gift. Ruin is the road to transformation.’ This is me. Kinailangan kong masira para umayos ulit ako.”