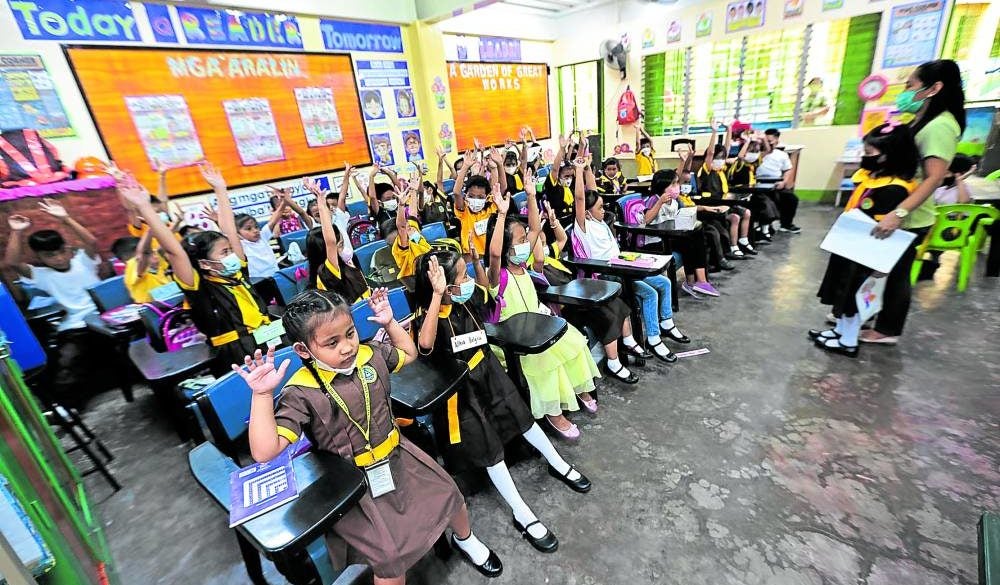 “Three things I don’t like about school is it is a waste of time. I also don’t like it because teacher doesn’t call me that much. She ignores me. I don’t like when the other classmates get called. They get called all over again. It’s like I am not there.” My then 6-year-old wrote this in response to one of the writing prompts I had my kids do over the summer.

She finished the latter part of kindergarten in a progressive school with a class size of about nine, then moved to a big school for first grade in a purely online setup. The method of instruction was traditional, and the class size was close to 30. She excelled and independently finished her tasks but was often bored.

A boy her age was informally home-schooled through the first year of the pandemic. He had to take kindergarten a year later than his peers. The Department of Education wouldn’t allow him to take the test, granting him a learner’s reference number. This 12-digit national student identification number is necessary to be able to enroll in any school. At the time, there were no COVID-19 vaccinations for children, and there was no testing facility for that purpose.

By this time, with equal parts impatience and trepidation, several schools in the country have started hybrid schooling, alternating face-to-face classes with online learning.

In smaller schools, they’re able to have in-person classes Mondays through Fridays, just as in prepandemic days. In schools with bigger populations, parents were given the option to continue with purely distance learning or to ease into a hybrid setup.

My kids chose to do hybrid, so we are currently part of this logistically complicated arrangement. Classes, initially around 35 to 40 to a room, have been split into clusters A and B, so only less than 20 are in a classroom to maintain social distancing. Cluster A will have on-site classes for one week, while Cluster B will have theirs online in the afternoon. Then, the clusters switch the following week.

Kids are masked up all the time except when it’s time for recess; they can eat their snacks (no sharing) in 15 minutes. No table-hopping or talking to classmates, then it’s masks on again. Playgrounds are cordoned off. Jet-lagged

In a school with smaller class sizes, the children are made to run outside the field with their masks off. Most kids aren’t able to do three laps, but that is probably not solely due to being cooped up during lockdown. Unlike in the ‘80s-’90s (before gadgetry) when kids played patintero and piko during breaks, children these days find playing outdoors too tiresome. But I digress.

While I feel perpetually jet-lagged with this hybrid approach, my sixth and second graders enjoy the best of both worlds with this setup.

During in-person classes, they get to see their teachers and classmates and get more classroom attention due to the smaller class size. But, this is at the cost of waking up extra early and the stress of getting to school on time (we have to line up to enter the village where the school is). We also had to buy school uniforms and shoes, and pack their baon.

Online classes start at noon, so on those weeks, they get to sleep in a wee bit more. There is zero travel time, no need for school uniforms, food is readily available at home, and we save on gas. However, they miss out on fun class interactions and the diverse personalities we bought into in opting for a big school. Their day ends later, which means doing homework and studying for exams on the morning of the day instead.

We try to keep on top of it with laminated cycle trackers and teach the kids to write down their to-dos in their calendar planners. Still, balancing our jobs and household demands is a daily struggle.

Still in a pandemic

A doctor friend of mine with three kids had just dropped off her kids at school when she received a call from the school clinic saying her son complained of a sore throat. She knew he was bluffing, and she soon realized it was because her son wanted to skip Filipino class. But because we’re still in a pandemic, she had to return and pick up her son.

At least she’s a doctor and can clear him of imagined maladies. Those who aren’t doctors need medical certificates for kids to return to class if they present with symptoms that could point to COVID-19, and those don’t come cheap.

My son contracted a fever three days after attending his first face-to-face class. Of course, COVID was the first suspect, but three negative antigen tests and 10 days later, his fever finally disappeared. Viruses can run for 7-10 days. It was the flu, but we still had to get a clearance stating it wasn’t COVID.

I recently met up with a friend based in Chicago. She and her sons contracted COVID while vacationing in the Philippines. She said during the worldwide lockdown in March 2020, her children’s school moved learning online till classes resumed in September 2020. They had face-to-face classes since then and only got infected when they visited our shores.

Other friends’ children who forayed into homeschooling during the lockdown returned to big school this year. Some wanted the experience of graduating with real people or realized they wanted to meet new friends. Still, others discovered they preferred to learn online, which was okay, too.