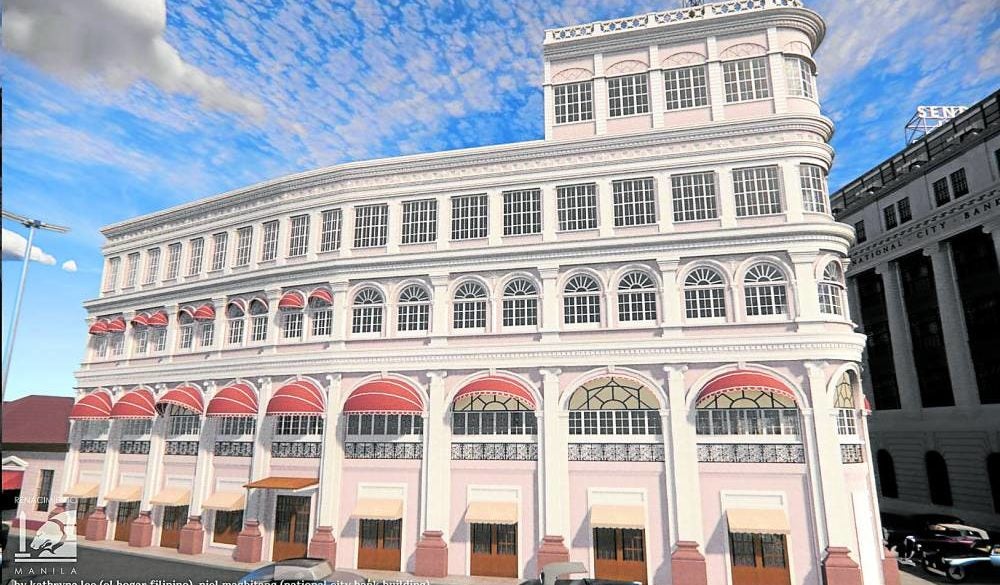 After more than a year of inactivity, the Chinatown Museum in Binondo, Manila, officially reopened to the public on July 15 with a special exhibition on prewar Escolta from Sta. Cruz Church to Plaza Moraga and beyond.

Located on the fourth level of Lucky Chinatown’s North Wing on Reina Regente Street, the museum opened in June 2019 but closed less than a year after due to the coronavirus pandemic.

It was able to open on a limited capacity and scheduled visits these past months, and fully opened its doors to the public with the recent relaunch.

The highlight of its reopening is the “Digital Manila Project” exhibit of the group Renacimiento Manila (RM) featuring digital renders of prewar architectural landmarks located on Escolta, which used to be the economic center of Manila and the Philippines.

RM is a group of young heritage advocates and enthusiasts committed to promoting Manila’s architectural gems through various means, such as heritage appreciation tours and digital renderings of past and present landmarks.

The exhibition, which runs until December, is supported by the National Commission for Culture and the Arts and liquor brand Fundador.

It is part of RM’s “Renacimiento Initiative,” which “revolves around heritage appreciation and advocacy towards Manila’s urban renewal through our projects and events to ultimately deepen people’s appreciation of our country’s rich history and its capital, and aspire towards its vibrancy with the protection of its remaining heritage in mind.”

Bea Dolores, RM’s vice president, explained that the “Digital Manila Project” exhibit is composed of two parts—prewar Manila and “Beyond Nostalgia: Visions of Manila,” which she said are “all comprised of abundant research, faithfully recreating digitally the buildings down to their minute details.”

She said her group incorporates urban design studies and planning in order to produce a future-proof design, rooted in Manila’s sense of place.

“At the end of the day, we intend to put things into realization, a revitalized Manila that celebrates its history and protects its heritage,” she said.

“Renacimiento Manila extends heritage appreciation to the general public via artistic means, and we thrive on creative collaboration with the community to help bring economic opportunities to the area,” said Dolores.

“We also campaign and lobby with multiple stakeholders to protect our heritage properties, and even in establishing heritage zones,” she added.

Access to the exhibit is free of charge, but regular charges apply for the other parts of the museum.

The Meisic Gallery is one of 18 captivating galleries of the museum, touted to be the first cultural museum dedicated to Binondo.

Other galleries include the Alcaiceria, which pertains to the 18th-century Alcaiceria de San Fernando, a commercial building similar to the residential dwellings called tulou in Fujian, China, where most of the Tsinoys came from; shophouses; Origins of the Revolution; Botica de San Fernando; Flavors of Binondo; and Tranvia, among others.

Janine Cabato, head of Megaworld Museums, said the museum’s reopening with the “unique historical exhibit will educate everyone on the old Binondo and the pivotal role Escolta played in our nation’s history.”

She said a host of activities will be held by the museum for the rest of the year, which include sketch walks, bike tours, food tours and photo walks of Binondo.

Symposiums will also be held like the one on the architecture of Binondo by Lorelei de Viana, author of “Three Centuries of Binondo Architecture 1594-1898: A Socio-Historical Perspective” and the art deco edifices of Escolta by Ivan Man Dy of Old Manila Walks, coauthor of “Deco Filipino: Art Deco Heritage in the Philippines.”

Cabato said one of their main thrusts is to engage the community in Binondo to better appreciate its history, culture and heritage. —CONTRIBUTED