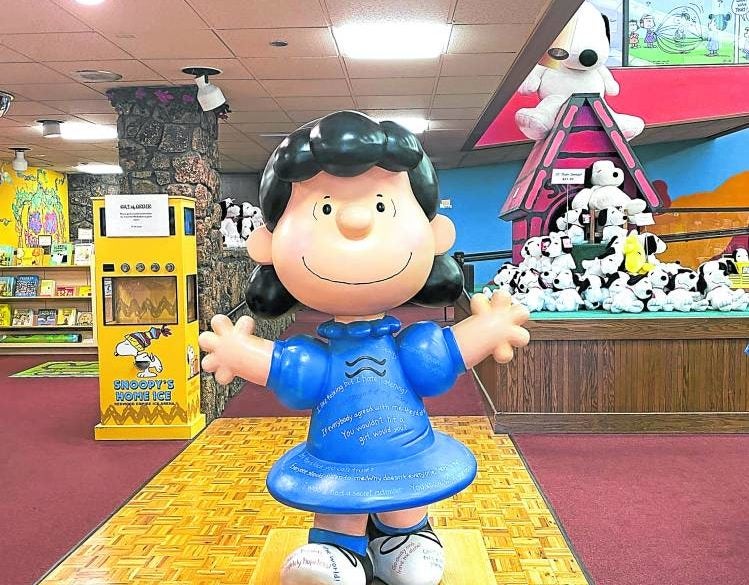 Lucy greets us at Snoopy’s Gallery and Gift Shop.

Stumbling upon Snoopy in Sonoma

We were headed to Sonoma County and its neighbor Napa Valley for a wine tasting trip. Both places are known tourist destinations in California because of their wineries. We took a small plane from Burbank Airport in Los Angeles and landed at a small airport in Sonoma County. As we were walking from the plane towards the airport building, we noticed Snoopy the Flying Ace painted above the door of one of the structures. When we got closer, I saw the words written around Snoopy: Charles M. Schulz Sonoma County Airport. Wait, what? Why would they name their airport after the creator of Peanuts?

When we entered the airport, Peanuts characters were all over the place. There were huge figures of Lucy and Snoopy. Big Charlie Brown and Lucy tile murals functioned as restroom signs.

Because Peanuts comic strips were a constant for me when I was growing up, I started to get excited. I skipped the bathroom break and hung out beside Lucy, Googling why Sonoma County named its airport after Charles M. Schulz. I found out—fun fact—that he lived in Sonoma County for over 40 years!

Outside the airport, I continued to look around this Peanuts-inspired place. I saw what I thought was a mailbox designed to look like Snoopy’s house. It turned out to be a little free library with books inside and the sign “Woodstock’s Bookstock. Take a book, leave a book!”

On our way to the hotel, we passed by a museum—the Charles M. Schulz Museum! “We have to go there,” I said excitedly.

But my fellow wine tasters Apple, Ally and Isabella had other priorities. “We have an itinerary,” they reminded me, shutting down my attempt to disrupt our plans before the first glass could be poured.

Undeterred, I started researching about the museum when we arrived at the hotel. The place seemed small but interesting. It was less than five miles away. I’d probably need just an hour to check it out. The museum was open until 5 p.m. and it was only 3 p.m. We still had time! I tried to lure my companions by showing them photos of the museum but no, we had an early dinner reservation. Bummer!

Still, I wasn’t ready to give up.

On our third day in Sonoma, there was a window of opportunity. Our wine tasting was scheduled at 1 p.m. and the museum opens at 11 a.m. They finally agreed to spend an hour at the museum before heading to the winery. Great!I was sure there weren’t going to be a lot of people there and we could get in and out quickly.

Good grief, I was so wrong! As we were approaching the museum, we saw a ton of people lining up on the street outside. They were there for the United States Postal Service (USPS) First Day of Issue and Peanuts Stamp Dedication Ceremony. The new US postage stamps, which are also available on the USPS website, commemorate Charles M. Schulz’s centennial year and feature 10 different designs.

It was heartwarming to see so many old people who made up majority of the crowd. Many of them were even sporting Peanuts on their outfits—they had Schulz’s popular characters on their shirts, bags and shoes.

On the first level of the museum, there was a wall lined with framed comic strips, a mix of original and select Peanuts comic strips from different years, as well as tributes from other cartoonists.

It was fun to realize that the strips are still relatable, possibly even more so, to me as an adult.

On one wall, a huge Charlie Brown was painted. “I can’t stand it!” his words read. On another segment, there was Lucy’s help desk with the signage “Psychiatric Help 5¢.”

There was also a black and white photo booth version of Lucy’s help desk, which was a crowd favorite. We made sure that, Isabella, who is a psychologist, had some photos taken there. There was also a movie theater at the museum, but it wasn’t operational that day because of the ceremony.

On the second level, the displays were mostly of Charles Schulz’s personal effects. There’s a recreation of his working space which was called Sparky’s Studio (Sparky was his nickname), located at One Snoopy Place.

Some of Schulz’s sports equipment were also on display. He loved sports, most notably ice hockey, which he featured regularly in his strips.

At the museum, there was a big activity room where there were books and art supplies like coloring sheets with Peanuts characters on it. Our favorite was the red paper cutout that you had to fold into an origami of Snoopy’s house.

There was also a wall labelled “Passports to Peanuts, Peanuts Around the World!” It was a display of Peanuts comic books in different languages. There was one in Filipino entitled, “Anong Say Mo, Snoopy?”

Right across the museum was a café called “Warm Puppy Café,” which turned out to be part of the Redwood Empire Ice Arena, aka Snoopy’s Home Ice, an indoor ice skating rink. There were more life-size figures of Charlie Brown, Snoopy, Woodstock, Snoopy’s house and again, Lucy’s help desk. There was also a beautiful plant sculpture of Snoopy.

When you walk a little further from the café, there’s a big souvenir shop called Snoopy’s Gallery and Gift Shop, where you will be greeted by Lucy with arms wide open. Our target though was a very famous painting, which we saw on Google search and were trying to find in the museum. It was the painting of Mona Lucy! It was extra funny because Apple was joining us straight from a European trip where she visited The Louvre and had a photo with the real Mona Lisa painting.

As you could imagine, it was cuteness overload inside the shop. We already bought our souvenirs from the small shop inside the museum, but it was hard to resist buying more. I bought a golf ball with golfer Snoopy on it, a Snoopy shirt, a Peanuts sweatshirt and a referee Snoopy dress I have no idea where I’d wear.

We spent way more than an hour there and we were late to our wine tasting, but no one complained because that segue to Snoopylandia was well worth it!