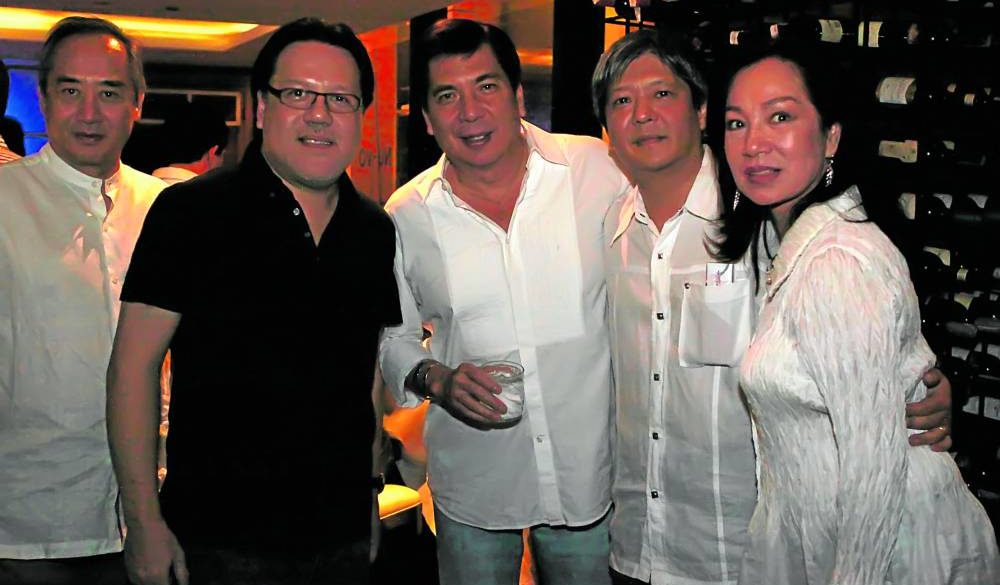 A partner and “guru” at The Palace Complex in Uptown Bonifacio, Ysmael continues to be the unrivaled authority on a storied milieu, for a singular reason: He elevated the drab Manila disco scene in the late 20th century to a sophisticated, state-of-the-art universe where guests tirelessly mingled, frenziedly seeking fun while climbing higher up the social ladder. Urbane and solicitous, this seductive raconteur and host of such landmark clubs as Stargazer, Louie Y’s, Euphoria and Venezia, set every standard that other clubs aspired to, luring in the once unreachable A-crowd. He was born to do this.

“There was much to be desired in the aspects of flair, music and class,” Ysmael once told this writer by way of describing the pioneering days. “I wanted a disco in the league of Europe’s best.”

As he turns 74 on Nov. 22, Ysmael celebrates with the launch of his memoir, “Good Morning, Time to Sleep” in Xylo at The Palace. The 300-page chronicle of the author’s life woven into startling (many of them little-known) accounts of Manila’s club scene is the result of two years of writing and gathering testimonials.

“The book covers my childhood, family, schooling, travels, my life away from social events, my daughter Missy, my other kids and the present clubbing environment,” he said in a phone interview. “No less than 42 of my 74 years have been devoted to clubs.”

Ysmael kept mum about the juicy details of his colorful life so as not to preempt the book. One thing known at this point is that “Good Morning, Time To Sleep” relates how his famed finesse was cultivated.

It is rooted in pedigree. His father, man-about-town Juan Felipe Cortez “Johnny” Ysmael, came from a landed family that developed the Magdalena estate in Quezon City. Named after family matriarch Magdalena Hashin Ysmael-Hemady, the estate would become New Manila.

Louie has two older siblings, Johnny “Piqui” Jr. and Teresita “Techie” Bilbao. The youngest, Ramoncito or “Cito,” died in Madrid in 1971 from a drug overdose. An even younger stepbrother, Hans Kasten Jr., died in 2014 after a lingering illness.

A scam and other things

Ysmael studied at La Salle and went to boarding school in Cheshire Academy in Connecticut. He took up liberal arts at the American College of Switzerland, then majored in business administration at the former American College in Paris and spent leisure time in discos.

Returning to Manila in the early ’70s, Ysmael set up a trading company and then worked at the stock exchange. From the mid-’70s to 1980, he frequented Studio 54 in New York, where he shared tables with first-tier designers, Hollywood celebrities and society icons.

At about this time, he became the victim of an oil scam in the Philippines. “After the terrible beating I suffered as a result of the scam, I had to do other things to get back on my feet,” Ysmael said.

In 1979, he noted the potential of Silahis Hotel’s penthouse disco, which was doing rather poorly, and assured hotel owner Leandro Enriquez that he could turn the business around. The penthouse became Stargazer, the first disco on record that attracted high-net worth patrons and the crème de la crème. Stargazer introduced the concept of exclusivity by issuing privilege cards that entitled guests to free entry while non-cardholders paid their way in. Ysmael pointed out that Stargazer was on par with elite discos around the world, including the best ones in Europe after which it was patterned.

Ysmael next opened Louie Y’s at the Hyatt in the early ’80s, where his crowd followed, and where he famously entertained the first lady Imelda Marcos and son, Ferdinand “Bongbong” Marcos Jr. After the Edsa Revolution in 1986, Ysmael launched Kuya/Pare, which became known for Latin music and a chill vibe, at Mile Long Island in Makati. By the end of that decade, he had moved to Hotel InterContinental to open Euphoria, which proceeded to host big-name entertainers such as Stevie Wonder, Rick Astley and Sting. As disco lights faded in the ’90s, Ysmael emerged on top of Venezia/V, a classic bar. In 2002, he was the main man at Nuvo restaurant and bar which, for a spell, featured heiress Katrina Razon as DJ.

From the mid-aughts, Ysmael has teamed up with younger entrepreneurs—Erik Cua, GP Reyes, Tim Yap and a few others—getting new enterprises up and running, among them Members Only, an exclusive club, later rebranded as Prive. Opus in Resorts World opened in 2010, a showcase of fine dining and molecular gastronomy and acclaimed for its luxurious lounge. Top of the Alpha at the Alphaland Corporate Building in Makati, a jazz club launched in 2018, was shortlived. With Cua, he opened 71 Gramercy at The Gramercy Residences, the country’s tallest condo, and their latest collaboration, The Palace Complex.

“Good Morning, Time To Sleep,” details intriguing anecdotes of the author’s clubbing adventures—rushes with VIPs, tiffs with top management who hired his services, brawls and even shooting incidents. It is interesting to note that despite the resulting negative news, customers returned to each of the affected venues. Altercations in clubs are inevitable, Ysmael said. As it happened, more fistfights would have erupted were it not for tighter security measures promptly put in place.

Though he considers himself “retired,” Ysmael regularly visits The Palace Complex and its establishments—Xylo, Revel, The Island, B.A.D. and Yes Please— for periodic evaluation of overall service.

In his younger days, Ysmael was always a sole proprietor. The Palace is a corporation led by Cua, dubbed Prince of Nightlife since, clearly, “King” is taken. “I was a one-man show,” Ysmael said. “The way I ran my clubs was a lot more personal, compared to The Palace, which is an industry in itself with 400 employees.”

His biggest learning in such a long club career is to be intuitive of customers’ idiosyncrasies, Ysmael said. “When you meet people at night, they are very likely intoxicated, perhaps even uninhibited. Back to the grind the morning after, they are a very different species. The trick is knowing how to deal with them in both settings.”

Ysmael is discreet about his reputation as a ladies’ man, although incredibly, some relationships lasted five years. He has six children, ages 19 to 32, with five different mothers (one had twins). “Three of them I did not meet till they were in their 20s. The mothers had kept mum about them, for personal reasons. I am glad that they were all raised well. When we gathered for a reunion in 2014, they bonded easily.”

In 1998, Ysmael made news when he tied the knot with Cecille Chang after a year of courtship. He was 50. Together, they opened three restaurants, including the still popular Simply Thai at Greenbelt 5.

For years the couple tried to conceive but failed. When a second child, a daughter, was born to Cecile’s brother and his wife, the pieces fell into place. Ysmael recounted, “Knowing that we were desperate to start a family, they offered Missy to us.”

Louie and Cecile were married for 11 years—a record for a night owl. “My work did not suit married life,” he admitted. They have remained good friends. She has since married a Danish national who runs a coconut plantation in Palawan. Louie has custody of their daughter. “Missy has special needs,” the devoted dad said, “but she is the most important person in my life right now. She is beautiful.”

Some parts of the memoir tend to paint Louie Ysmael as a rascal, but many others reveal his good heart. “I have always avoided hurting anyone,” he said. “I believe—because it is true—that what goes around, comes around.” —Contributed