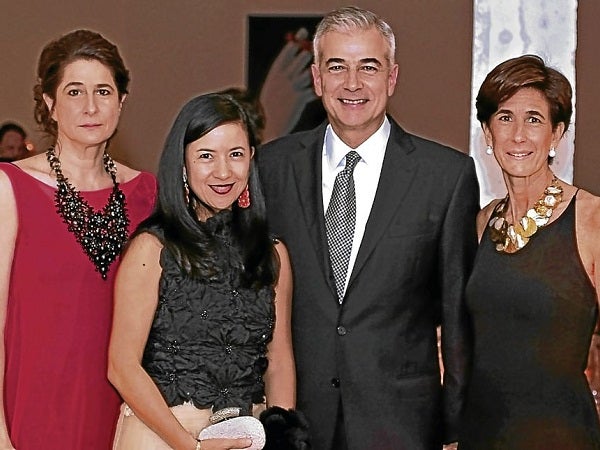 A chronicle of unique experiences, unforgettable places and happy occasions that celebrate life . . .

It began with a phone call last September. Ayala Foundation’s Fernando Zobel de Ayala shared the exciting news that Prospero World, a UK-based philanthropy advisory group, wanted to mount a Philippine Fashion Show in London in the spring in aid of Ayala’s Center of Excellence in Public Elementary Education (Centex) program. I was happy to become Manila project coordinator for the proposed charity gala event.

The fashion show was to have two elements: “models for a night”—bankers, financiers and other professionals who were willing to brave the catwalk to raise funds through sponsor pledges—and top models from the Philippines to showcase the couture collections.

Through the very generous support of major sponsors Nokia and Credit Suisse, as well as Amdocs, Etihad Airways and Bank of Singapore, the dream became a reality.

Off to London via Abu Dhabi, on the London Philippine Fashion Show’s official carrier, Etihad Airways. Living up to its reputation as one of the world’s most luxurious airlines, Etihad’s in-flight Arabic cuisine, impeccable service and special airport assistance were fabulous. Its Abu Dhabi lounge even offers complimentary treatments by the renowned Six Senses Spa, where I indulge in a blissful radiance facial.

Our first day in London, we meet up with representatives of the Philippine Embassy led by Honorary Investment and Trade Representative Vic Casim, who kindly assist us throughout our stay. After we hit the ground running, it is nice to unwind in a cozy Italian dinner at San Lorenzo, organized by our gracious London host, Fernando Zobel de Ayala.

Great waking up to perfect spring weather—clear blue skies and crisp, nippy air! Spent the morning sorting out all the clothes for the big show.

After a traditional English lunch of roast prime rib, Yorkshire pudding and strawberries and cream at Harrod’s Georgian Restaurant, we are suitably fortified to walk the charming streets of Chelsea. At Harrods, I can’t resist a quick stop at their Canine Shop that has everything to pamper your pet—from a spa to a sweets section with all kinds of doggie treats.

I love exploring the Chelsea Antiques Market (across the Old Town Hall on King’s Road) and Gray’s, with little nooks that stock all sorts of interesting finds, from steamer trunks to vintage jewelry and silver.

That night, Prospero throws a welcome dinner for the designers, models and all the Manila and London teams to meet and mingle.

In true Filipino style, Gail Alvarez and her son Anton host a delightful lunch for the Manila contingent at George, a discreet members club in Mayfair. Ours must be the  loudest table in the club! On the way over, I notice a fascinating giant egg sculpture in a lucite box, one of several I had seen scattered around central London. It turns out to be part of Faberge’s “Big Egg Hunt” for charity, featuring over 200 works by leading artists from around the world (the likes of architect Zaha Hadid, designer Tommy Hilfiger and local fashion house Mulberry).

That afternoon, we stop in to visit Philip Mould in his beautiful gallery on Dover Street, in the heart of London’s art market. A childhood friend of Fernando from boarding school days, the highly respected specialist in British art and Old Masters and resident expert on the BBC’s “Antiques Roadshow” had very kindly volunteered to conduct the live auction at the London Philippine Fashion Show.

Today is D-Day. It also happens to be the day that H&M launches its Marni collection! Walking with my dear friend Maricris Brias to early morning Mass, I am amazed at the two-block queue that has formed on Kensington High Street as customers wait for the store to open its doors. Dying to get a glimpse of the collection, but would have to pass (sigh) as there are fittings, setting up and rehearsals scheduled all day.

Maricris is yet another example of the outstanding Bayanihan spirit—she herself shipped her beautifully crafted tinalak lighting fixtures and vases to London, giving Victoria House, the event venue, a unique Filipino touch.

There is such a mix of emotions at rehearsals. All that we have been preparing for the last six months would come to fruition that night. The air backstage is fully charged.

As Victoria House fills up over cocktails, it is lovely to catch up with old Manila friends who have come in full force to support the fundraising show: retired Jardine Davies Philippines head Percy Weatherall and wife Clara, former Cathay Pacific country head Richard Graham, and Manila regulars Elaine and Anto Marden. In the crowd of over 300, Marie-Chantal and Pavlos of Greece are an elegant presence on the front row.

The audience warmly cheers the stunning collections and models on stage. An auction follows, with Philip Mould working the crowd to a bidding frenzy. The enticing lots include luxury stays at Amanpulo and Shangri-La Mactan Resort and Spa, a necklace by Bea Valdes (as worn by Kate Moss on the cover of British Vogue’s September issue), and a private master class in personal communication with Robin Kermode (he recently played John Major in “The Iron Lady” opposite Meryl Streep).

The entire evening is a resounding success! In all, a net amount of 160,000 euros, (approximately P10 million) is raised directly for Centex. That translates to quality elementary education for 500 gifted but underprivileged children under Ayala Foundation’s pioneering educational program.

What a journey this has been. I met and worked with so many amazing people along the way. After a few nerve-racking moments, I am deeply grateful that things fell perfectly into place for us last night. Not only did the event benefit such a worthy cause, but it also introduced London to the best of Filipino artistry and creativity. It was an honor and a blessing for me to have been part of “team Manila.”