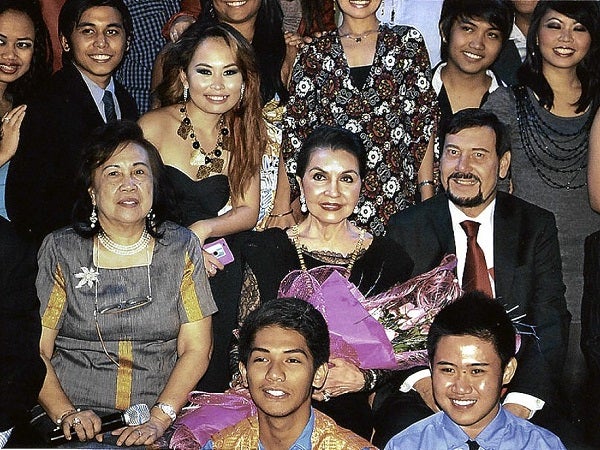 Amparito Llamas Lhuillier was conferred the degree of Doctor of Humanities, honoris causa, by the University of San Jose-Recoletos (USJ-R). In the school’s 65-year history there have only been five so honored, and Amparito is the only woman.

Proponent was Milagros Castillo Espina, who for many years was the dean of arts and sciences at USJ-R. Though she retired some time ago, she has remained active in school affairs, and was recently awarded one of the highest honors of the Recollect Order.

“I am deeply honored. I don’t know what to say. What have I done to deserve this?” Amparito exulted when told about the honorary degree. “Your life story,” replied Mila. “Your passion for education,” she added, showing a special biographical sketch made of Amparito by a friend.

Amparito studied kinder to high school at St. Scholastica’s College in Manila, and took up Elementary Education at St. Paul’s College, also in Manila. She became a preschool teacher, taught Spanish at the International School and Reading at the Assumption Convent. Her goal was to put up a school.

Marriage to Michel Lhuillier, now the Honorary Consul of France in the Visayas, brought her to Cebu in 1964. They settled here and raised their four children—Charles who is based in Manila; Michael who is in California; Yvette who lives in Paris; and Monique, world renowned couturier.

In 1995, Amparito contacted Mila Espina who helped her set up the Amparito Llamas Lhullier Educational Foundation (Allef). It gives tuition subsidies to deserving poor scholars, specifically those with singing and theatrical skills. In these 17 years, more than 1,000 in USJ-R have benefited in a budget that has come close to P8 million.

Allef has also assisted teachers with the thesis and dissertation grants, as well as attended to more than 100 (annually) academically gifted children of employees of the M. Lhuillier group of companies.

The conferment ceremonies were held with the attendant panoply and pageantry at the USJ-R Center for the Performing Arts in downtown Cebu. It was filled with family, friends, school officials, faculty and most of all by students who were there to cheer their glamorous benefactress.

Indeed, beneath the academic gown of green satin, Amparito wore a clinging black formal with the signature of daughter Monique. However, as anyone who knows Amparito well will tell you, there is more to her than being a fashion plate. Her best facet is that of a concerned person involved in various charities and civic obligations.

USJ-R president Rev. Fr. Enrico Silab, OAR, presided the conferment and the awarding of the diploma and medallion. The hooding and capping ceremony was led by professor Teoddie Duman-ag, dean of the Graduate School of Arts and Sciences. Assisting were Consul Michel Lhuillier and sons—Charles Lhuillier  and Michael Lhuillier.

Amparito was inducted an alumna of the school by Dr. Antonio Esmero, president of Josenians Inc. Professor Ma. Virginia Visitacion hosted the program. At the end of which she asked Amparito to give the response, as she stood on a raised dais on the center of the stage.

“My heart is beating quite fast,” Amparito said, “This is the happiest day of my life. Come join me for a photo.” There was surge toward her, among them her sister Anna Marie with husband Johnny Dizon, her sisters-in-law Angie L. Mathieu and Marguerite Lhuillier, and a group of friends who had been her classmates during her St. Scholastica days.

Among them were Sister Maribel Carceller, Maricris Vasquez Prada, Hedy Taylor who came with her husband Jim Toolen, and Guadalupe Cabahug Latonio who makes her home in Mandaue City, Cebu. They are all at the reception and dinner that followed at the Casino Español de Cebu’s Salon de España.

Every table sparkled with silver mesh interspersed with the masses of rare orchids in vivid reds, oranges, pinks and deep ochre. Teresin Mendezona and Pinky Chang were collecting due credit. Guests were happy that at the end of the evening Amparito gave the sign they could take as many as they wanted home.

Among the many notables present and asked to stay at the head table were Gov. Gwendolyn Garcia with her child Christina, Duke Frasco (mayor of Lilo-an), Mayor Michael Rama with Jocelyn Pesquera, Councilor Margot Osmeña, Norma Gullas, Carlos and Mariquita Yeung, Bo and Hans Hauri.

Mila Espina acted as emcee and the evening was made even more lively by the performances by Allef scholars of today and yesteryears.