More than a toy store, and more than an exhibit, Sin•Ta is not your typical art gallery | Lifestyle.INQ ❮ ❯ 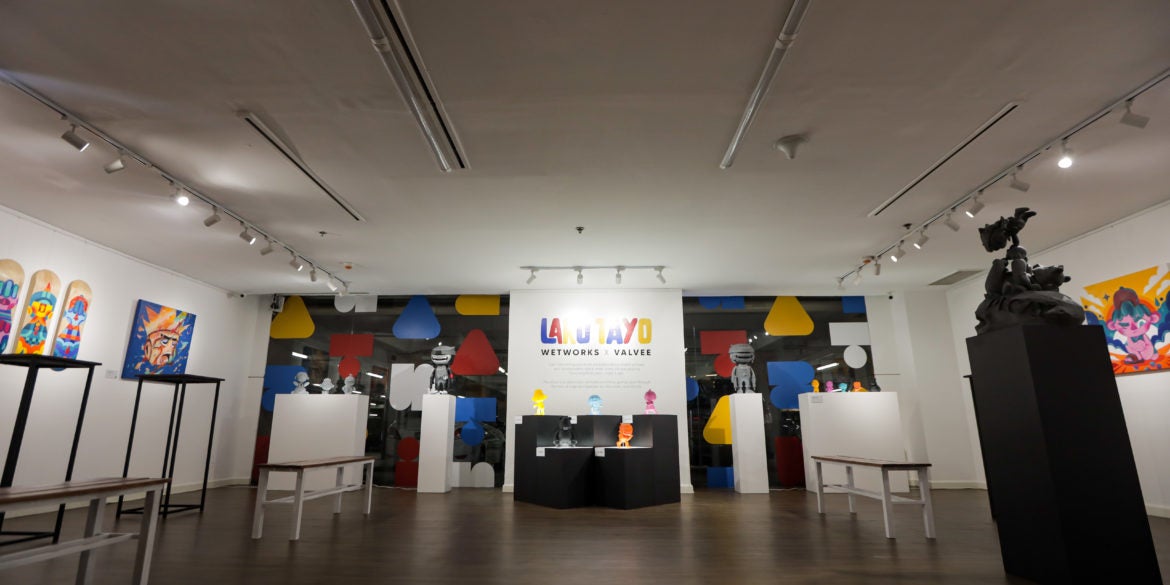 I loved toys as a kid. I enjoyed playing with them every day, conjuring made-up roleplaying scenarios and laying out small worlds made out of my own design. In there, my different action figures and items from across various unrelated franchises would either live in harmony or at war with one another. One of my favorite toys to play with was this Strike Gundam model that we had at home—I was too young, and a little too mentally underdeveloped to understand how to construct one, so it was my brother’s. To his horror, I would usually pit the mecha against some of my other toys in a winner-takes-all death match where I would physically slam them against one another. I know this is sacrilegious to the collectors out there, but I was a kid who imagined these characters pulling out some of their ultimate moves, cut me some slack.

Obviously, I was in the wrong I get it. I know now that Gundams are not meant to be thrashed around like that. But isn’t that the beauty of toys? It doesn’t matter what you do with them, play with them, or leave them up for display—who cares as long as you’re enjoying yourself? For those of Solid Toys, the minds behind the Sin•Ta Gallery which features both locally and internationally-made designer toys, they’re proud to share this passion with like-minded enthusiasts. 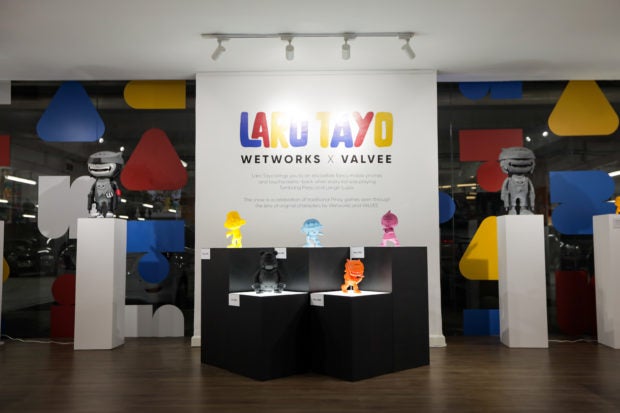 Just this November 26, the official distributor and retailer of art and designer toys, Solid Toys, opened the Sin•Ta Art Gallery at the Collective Base Complex in Basement 2 of Promenade Greenhills. I had the pleasure of having small chat with Patrick Reyes, one of the three founders of the group, to learn more about designer toys, their history together, and what the gallery was all about.

The Birth of Solid Toys

Locating their roots in the very mall we were standing in, Reyes shares that he met their would-be co-founder Jessie at an overnight line for Funko Pops. The two were both re-sellers in Greenhills and managed to hit it off after a couple more encounters, seeing each other in the area every Saturday. Realizing their growing customer base, the two eventually decided to join forces and delve into the business of designer toys, an up-and-coming venture they identified an opportunity in, thus giving birth to Solid Toys in 2020. Moving away from reselling and into retail, they began collaborating with international artists such as Wetworks and 2PetalRose, and even opened their first store in Collective Base in Theater Mall.

Completing the trifecta, Jessie also met Pau Lontoc in Singapore back in 2019 while lining up at Culture Cartel. 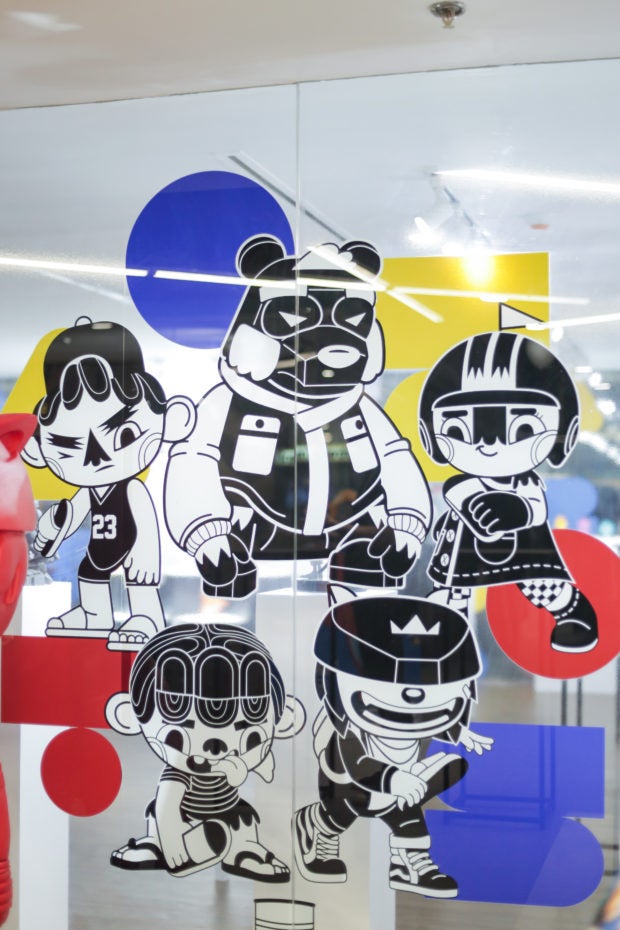 From Funko Pops to an Art Gallery

It’s an interesting jump to make from toys to art, but Reyes shares that in some way that was always the goal. He explains “from the start we wanted to be an avenue to help local artists grow because the international scene is pretty big, and we saw a lot of potential with local artists.” Moreover, it also made sense because apparently, their initial design for their other store was almost gallery-esque, with an open middle with everything on the side.

“We wanted to be a venue that was not like those other galleries that are so expensive. We’re the venue for the smaller artists that we want to help grow.” You can feel this intent as soon as you enter their space. A gallery only in design and layout, there is a playful feel in the air, and no it’s not just because they feature toys. Rather, they don’t seem to take themselves too seriously, inviting you to freely gawk at and be in awe of the cuteness of the characters on display. It’s like an elevated hobby shop if I were to describe it.

“Sinta is also the old-fashioned Tagalog word for love. Sin•Ta Art Gallery aims to appreciate and to elevate different art forms, and to be the stepping stone for many up-and-coming artists to showcase their love for their craft.”

“Playing on the words sining and tanghalan, Sin•Ta is also an art gallery that displays different works of art across different media. This gallery will showcase both traditional and modern artworks such as paintings and art toys.”

Reyes shares that if he were to explain what designer toys were to someone who had no idea what they were, like me, he would describe them simply as paintings on a 3D picture. Admiring the fairly new medium and drawing on his passion as a collector, he also shares how he is personally excited by how artists translate in a form of personal expression, their art style, their personalities, and their emotions, into 3D physical objects that you can actually hold. Aside from feeling a sense of pride in the numerous Filipino artists who are able to showcase their talents in this field, this new sensation is something that he wishes to impart to anyone visiting their gallery.

The opening show of the Sin•Ta Art Gallery, ‘Laro Tayo’ draws inspiration from a time so alien to the one we have now, before the era of smartphones and touch screens when kids would be outside touching grass and playing games. Featuring Singapore-based Filipino artists Wetworks, and VALVEE, through both designer toys and traditional art, they give us their own take on this forgotten time, depicting their own original characters playing our favorite childhood games such as Tumbang Preso, Langit-Lupa, and Luksong Baka.

Wetworks or Carlo Andrada Cacho is an artist/toy designer who is known for his stylized sculptures and cute characters. He is the creator of ‘Foxy’ and ‘Xin’ who are both inspired by his beloved sheltie. Without hesitation, he continuously experiments with his creations and designs, instilling raw emotion into his works, while also not sticking to a singular style or material.

As I was going around the gallery, his piece ‘HOPE+DECAY’ caught my attention. It featured ‘Xin’ together with ‘Foxy’ atop a massive skull with the words HOPE and DECAY etched onto both its sides. Upon talking with the artist himself, he shared that he was inspired to create it when he felt depressed during the pandemic and sought to find a sliver of hope amidst the hopeless situation. It was honestly insanely adorable however despite the apparent gloomy messaging—the panda-esque ‘Xin’ lying on its back was too much to bear.

VALVEE or Valerie Villaflor is a visual artist and advertising art director. Drawn to patterns and bold images, her art style vaguely reminds me of a Disney film, popping with bright colors that captivate you the moment her work passes by the corner of your eye.

The creator of ‘Laya’ and ‘Hiraya’ this is her first time creating her very own original character after gaining experience from customizing and personalizing other already-made toys. 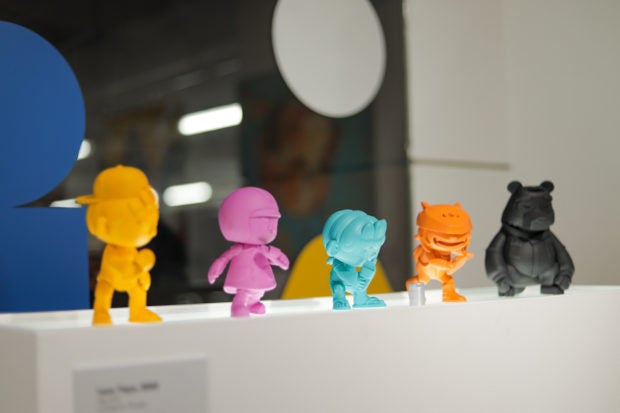 While all works displayed in the ‘Laro Tayo’ show are for sale, center stage is the 5-piece set of the five different original characters made by Wetworks and VALVEE. These include; Foxy, Xin, Maya, Laya, and Hiraya. There are only 75 available sets.

Visit the Sin•Ta Art Gallery at the Collective Base Complex in Basement 2 of Promenade Greenhills. ‘Laro Tayo’ will run from November 26 to December 26.

For more information, you can follow @sin.taartgallery on Instagram/Facebook.