Showing off the best of their breed | Lifestyle.INQ ❮ ❯ 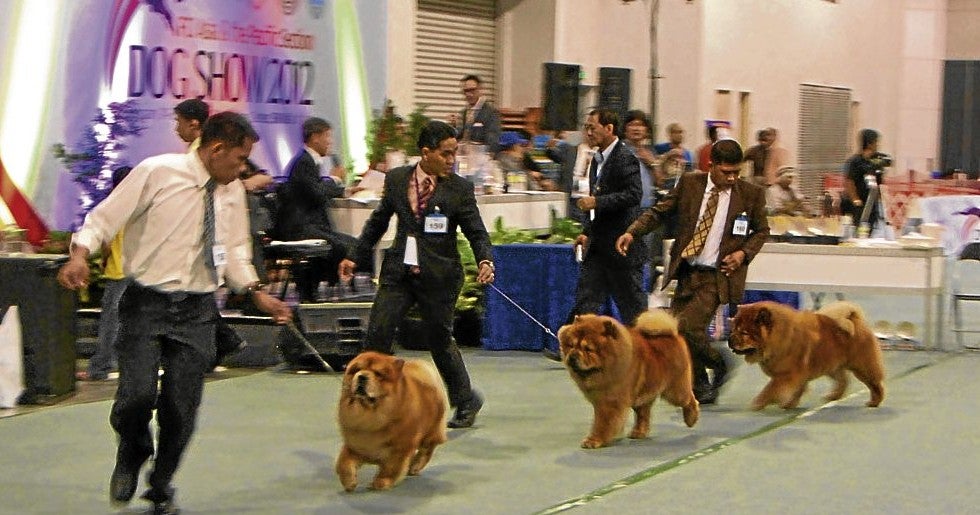 HANDLERS parade their Chow Chows around the arena to impress the judge and spectators. VELOIRA

Showing off the best of their breed

You can leave those fairy wings, tiaras and capes  at home. At the FCI Asia and the Pacific Section Dog Show 2012, what mattered most was whether or not they fit in very well with their breed.

Hosted by the Philippine Canine Club Inc. (PCCI) under the guidance of the Federation Cynologique International (World Canine Organization), the show is a conformation show, which means that the dogs are evaluated on how they adhere to breed standards. The focus is on the dog’s form and structure, height, stance and even temperament.

“Competition in conformation and performance events can best demonstrate the progress that has been made in breeding for type and quality, and for practical use, stamina and obedience,” says PCCI.

Prepping the dogs for such shows is serious business, too.  Miniature Schnauzer breeder Dr. Winston George Pascual, who has been joining dog shows since 2005, readies his dogs two months before every show they enter. “We need to cut off all their fur so that its real color will come out. A lot of tools are needed for grooming, too,” says Pascual.

The dog to be showed also needs to grow accustomed to its handler. “The dog needs to be walked twice or thrice a week so that when they get in the ring, may yabang na,” he says.

But then, there are dogs who are always good to go for dog shows—at least according to their humans. Thai student Paramet Kerdkaew beams at his 13-month-old Pekingese Ninja. “Oh, he’s always ready for show.” Ninja has been competing in dog shows in Thailand and Indonesia since he was four months old. “As long as he has an ice pack with him to keep him cool, he’s okay,” says Kerdkaew.

PCCI regularly organizes dog shows to give everyone a better understanding of the qualities and abilities of purebred dogs.  It calls for dog breeders to be more responsible in breeding their purebreds, to not just breed them for quantity, but quality as well.

“It’s not the first time for us to hold an international dog show, because we have been doing this once a month for many years. But it’s the first time we have done this at this magnitude,” says PCCI president Dinky Santos.

There was also an area where one can “Meet the Breeds.” Among those featured were the Siberian Husky, Pomeranian, Labrador Retriever, Chow Chow,  Shih Tzu, Chihuahua, Welsh Corgi, Norwich Terrier and Afghan Hound. There were also a couple of Swiss White Shepherds, the first of their kind in the country.

Adds Santos, “Preparation was tedious and tiring because of the magnitude of the show, but many people from overseas who show all over the world said that this is one of the best shows, if not the best, in Asia. We deserve it because we really worked so hard to make this a success.

“We proved to the world that we can stage a world-class dog show with world-class entries.  This is a feat that couldn’t have been imagined before,” Santos says proudly.

The PCCI president announced that they will now have this event on an annual basis, calling it the Philippine circuit. And this early, they are already preparing for the next dog show.