Get inspired by where Filipinos are traveling now | Lifestyle.INQ ❮ ❯ 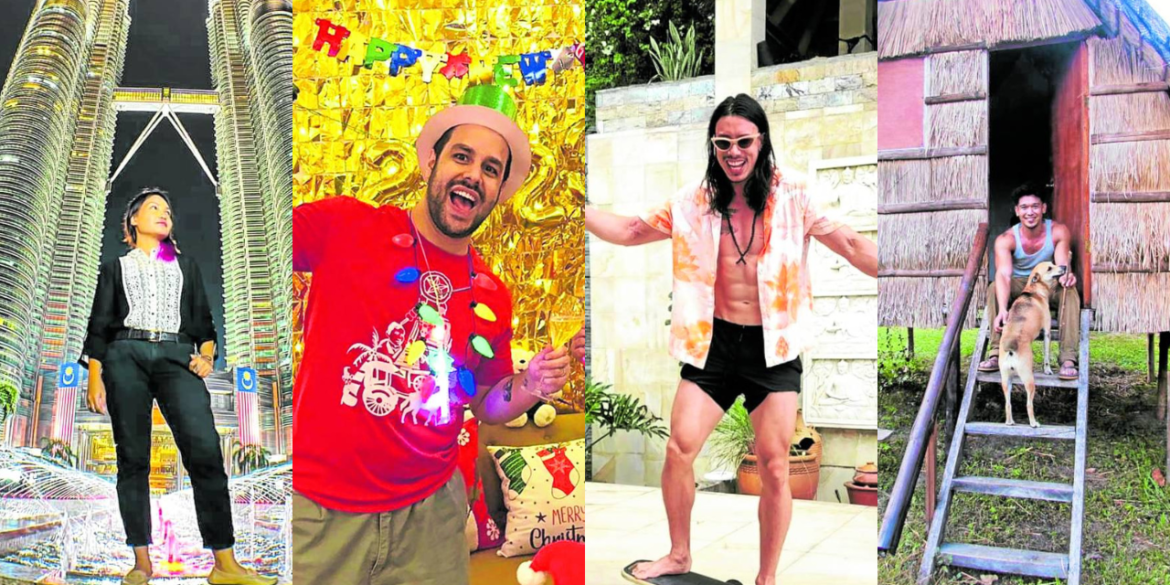 Get inspired by where Filipinos are traveling now

Some people may have spent their holidays either in new countries or close to home with families, but the year ahead is already packed with travel plans for most everyone, may it be for work or for leisure.

Creative entrepreneur and Metro Home TV host Anton Barretto celebrates New Year’s Eve with his family as a tradition. “Being with the family warms the heart and signifies unity and love in the coming year.”

But traveling has always been something he looks forward to, he said. “Fortunately, I was able to complete my travel bucket list before COVID hit. Now that it has become easier to travel and restrictions have eased up, I would like to do something more adventurous like paragliding over the Italian Dolomites or Umbria.”

Stylist and creative consultant Noel Manapat and his family were on a mission to eat throughout their recent Bangkok trip, where he also met up with friends.

“It was the first postpandemic travel, especially for the kids,” he said. “This month, I’ll be traveling to Singapore for culinary and architectural tours with friends. Hopefully, I can also go back to my favorite country, Japan.”

From the desert to the Arctic

Which is where painter Tracie Anglo-Dizon’s family spent the holidays. “Tokyo is probably everyone’s favorite Asian metropolis, and it did not disappoint—especially the food.”

She and her husband, A2A Safaris cofounder Victor Dizon, want to bring their children to Namibia, since the well-traveled couple have never been there either. “It’s the ultimate desert experience. My husband also wants to check out some new luxury lodges there.

“Our A2A partners in Antarctica are celebrating their 20th anniversary this year, and they’re hosting a special voyage around Chilean Patagonia for their best global partners. If time allows it, we might also go to Antarctica,” she added.

Happy Andrada-Gras, fashion designer and coowner of H&T Wine Gallery, welcomed the coming New Year at home since they still avoid going out and crowded places. But this year, they’re going to Palawan to enjoy and explore.

Visual, installation and fashion designer Kermit Tesoro was just circling Quezon City, Laguna and Zambales mostly for work at the end of the year. He’s returning to Berlin this month and, if things go well, he said he’ll go to either South Africa or Namibia to indulge his interest in botany.

Athlete and yoga teacher Joshua David Webb celebrated the New Year in Laguna with his family. And while he has no real plans to travel yet, he said he would like to check out Bali to teach there for a couple of months. Domestically, he wants to see Palawan and Siargao.

Fashion designer and Kandama CEO Victor Baguilat Jr. was at his mom’s beach resort in Zambales for the holidays, but he’s traveling to Geelong City to showcase his latest collection at Melbourne Fashion Festival in March, then bring the show to Cannes, France, to coincide with the Cannes Film Festival. “If things go as planned, I’ll be back in New York City for my masters by autumn.”

Painter Katrina Pallon also avoids big crowds during holidays, so she celebrated quietly at home with her family. This year, her plan is to go see the cherry blossoms in Japan, and perhaps also go to Vietnam to replace some of her lanterns from Hoi An. “The rest will have to wait until I’m done with exhibit preps for the year.”

For Raf Dionisio, cofounder of Make a Difference Travel and The Circle Hostel, family is most important, so he just spent the holidays in Manila.

Prior to that, he went to Davao to visit friends and family, and to Bukidnon to learn about soil biology and permaculture in hopes of building a stronger food system.

For 2023, he has categorized his must-visit places into two.

Category A is places to heal and help grow: working on conservation and forest restoration in San Felipe, Zambales, and Subic Bay; working with the Dumagat in Rizal; and working with mangrove farmers and fisherfolk in Batangas.

Category B is places to explore: “As a Filipino, I think COVID has taught me to appreciate local even more. I got to intimately know Quezon City where I grew up due to lockdowns. Exploring Bukidnon, Davao and General Santos is very exciting because of the potential to learn about precolonial past and a green agriculture future. The tribes there are fascinating.”

Dionisio also says he plans to push for permaculture and cross-community learning wherever he goes, with Bukidnon and Zambales as key sites.