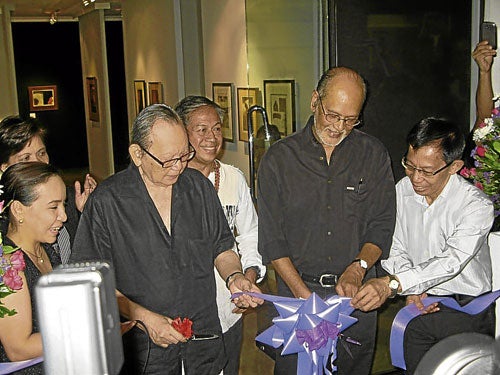 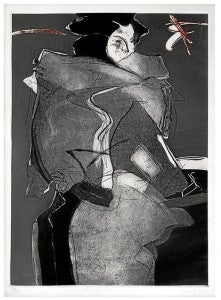 Past, present and perhaps future are collated in “Bencab Graphics: A Print Retrospective,” an exhibit which summarizes the National Artist’s evolution as a printmaker and graphics artist.

In one of his first public functions as new NCCA chair, Felipe de Leon Jr. opened the exhibit and described Bencab as one among a select few who ably fused the traditional and the modern.

Truly, duality is consistent in his pieces: female figures verging on abstraction, and period Filipiniana melded with a sprinkling of technology.

Bencab’s work has been mainly seen as social commentary, which is understated in a hauntingly graceful manner; the stoical tackling of social ills in such a way that “then and now” traverse age and milieu.

The collection spans four decades, although Bencab himself said there was a gap in his printmaking, particularly during the ’90s. While the body of works may be a synopsis of his “evolution,” he applies the word to the subjects in the prints themselves. 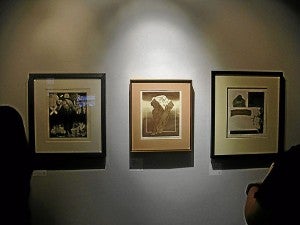 Speaking of “Glimpse of the Past/Present XXV,” he pointed out that the same girl was rendered in two different ways.

On the left, she is blue-tinged, a topless Igorot maiden with native adornments on her hair and hanging from her neck. Red on the right, she is the girl of today, clad in a T-shirt, her hair simply pulled back, and for a necklace she has what appears to be a cell-phone case. Indeed, an illustration of the title.

It evidently prevails, too, through the pieces that are results of his invitational month-long stint at Singapore’s Tyler Print Institute (STPI) in 2010. It was there that he enjoyed not only the technology but also the chance to work with up to 10 people at times, compared to his simpler machine in Baguio where he does everything alone. 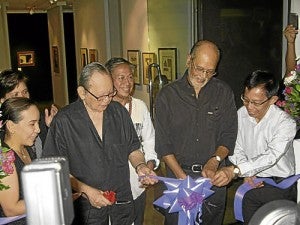 STPI apparently also enjoys Bencab as he has been invited again for another residency.

That the printmaking process is tedious even when only one method is used is testament to the achievements of Bencab at STPI. In some prints, he combines lithography, etching and collography. This entails running three separate plates at separate times on the same paper, though the description does not do the steps any justice as these are, in actuality, very meticulous even with the sophisticated equipment of STPI.

The crux of the effort is that each plate is made by the artist. The images are created on perhaps limestone or metal plates for the lithograph; copper or zinc for the etching; and a collage of various media maybe set on wood for the collograph.

In simplistic terms, a lithograph may be likened to off-set printing, and etching to embossing. Here, again, is the mixing of the old with the new, as the former was developed later than etching.

Lithography gives Bencab’s Igorot maiden her smoother skin while intaglio etching lends the more graphic lines to the image of her contemporary. While art prints woefully do not enjoy as much following as paintings, primarily because the idea that more than one exists diminishes its attractiveness, followers would be delighted since Bencab’s exploits in Singapore resulted primarily in monoprints. He was encouraged at the institute to make only one piece of each composition for purposes of diversity and exploration.

Audiences view the printmaking history of Bencab generally with time as a guide. Although in opting for more or less a chronological approach, curator Jonathan Olazo greets one with the earliest works to the right, the eyes are also drawn to the left, toward the center of the room where the newest are. It seems the curation has also captured Bencab’s time-inspired visual comparisons.

Dimmer, yellow-toned lights that aptly lend themselves to the sepia of age lead one through a “corridor” to the past. 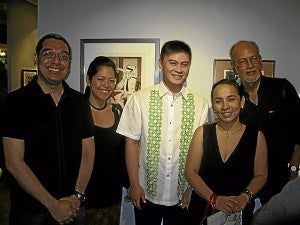 Notably, the etching plate for “Two Mestizas” (1977) is hung across the etching and aquatint artist’s proof along the way. The seeming hallway through time leads to the back, then around to the 2010 large prints which seem to be illuminated with brighter white lights, as if to underscore a “eureka!” moment.

Olazo said during the exhibit launch that the NCCA Gallery intended to hold instructive survey shows to benefit younger artists. He said the gallery had been able to achieve this by presenting Bencab’s print history. It is hoped that the show also improves appreciation for the sadly underrated graphic arts.