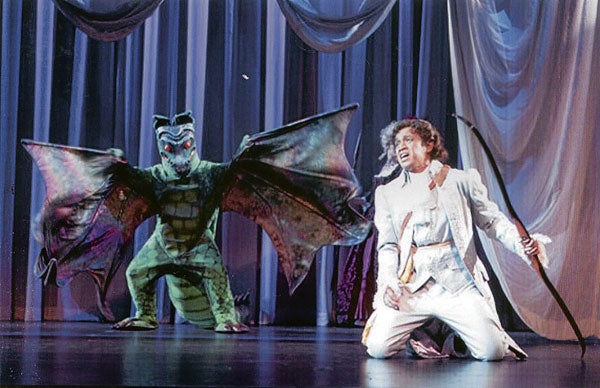 “Fake” by Floy Quintos (UP Playwrights’ Theater, directed by Tony Mabesa) is a dramatization of the Code of Kalantiao hoax, as exposed by the American historian William Henry Scott. The common thread of the two acts is the effect of the hoax on the sensitive teenage student Miguel (played by Ross Pesigan), who becomes disillusioned as he grows older (played by Brian Tibayan).

The climax was an emotional, bruising, in-your-face imaginary confrontation between the perpetrator of the hoax, José Marco and Scott.

One of Quintos’ most effective plays, the production benefited from its small and intimate setting (Teatro Hermogenes Ylagan, UP Faculty Center), along with Mabesa’s direction and knockout performances from the cast, which included Shamaine Centenera as the visionary; Joel Lamangan as Marco; Paul Holme as Scott; Richard Cunanan as a disabled pilgrim; and Alya Honasan as Mrs. Marco.

It was a felicitous evening of mostly sacred songs, the choirs inspired by a common faith, with all uniting at the end to sing “The Lord Bless and Keep You.”

The Filipino-Chinese Echoettes Choir celebrated its 29th year with a reunion concert at the Union Church of Manila (in Makati City). It was an evening of glorious sacred music showcasing the works of composers from the 16th to the 20th centuries, including Haydn and Mozart and Bernstein and Copland.

The concert was actually a tribute to the “ageless” choir founder, Celia Yu Ong, who conducted that night with the vigor of a young person.

“The disciplined sound of all the choirs invariably resulted in excellent renditions,” opined Robledo, himself a noted baritone and an alumnus of Jerry Dadap’s Andres Bonifacio Concert Choir. “It’s tough to judge, tougher still to eliminate such wonderful and equally deserving singing groups.”

A total of 17 choirs participated in the event sponsored by the European Union. Each group sang one European song, and one Filipino composition.

Lyric tenor Rogelio “Jun” Peñaverde continues with his winning ways in New York. He was presented by the Felipe Padilla de Leon Foundation (in New Jersey) in a concert at the LeiderKrauz Concert Hall in the New York City, and he has reprised his role as Prince Tamino, the male lead role in Mozart’s “The Magic Flute,” at the Danny Kaye Playhouse, also in the Big Apple. 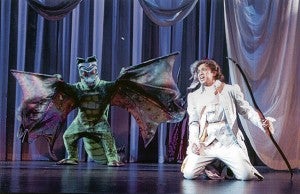 The young bel-canto tenor has a fan in Court of Appeals Justice Magdangal M. de Leon (himself a distinguished baritone and a son of National Artist Felipe P. de Leon): “His voice has matured—brilliant but sonorous. He has incredible vocal control, every nuance perfect. Compelling stage presence. He’s turning out to be a national treasure.”

The recently concluded Pundaquit Festival of the Arts brought together some 140 violinists and other musicians, including beginners, visual artists and writers, at Casa San Miguel in San Antonio, Zambales. Most of the young participants were gifted children from fishing communities and other nearby low-income areas.

During the final concert, the violinists, violists and cellists, students of famed violinist Alfonso “Coke” Bolipata, performed competitions by Mozart, Telemann, Boccherini, Mendelssohn and Vivaldi. They were given a standing ovation.

And Pundaquit, now on its 18th year, chalked up another milestone.