From California to Laguna, this pit bull mama wants to save them all | Inquirer Lifestyle ❮ ❯ 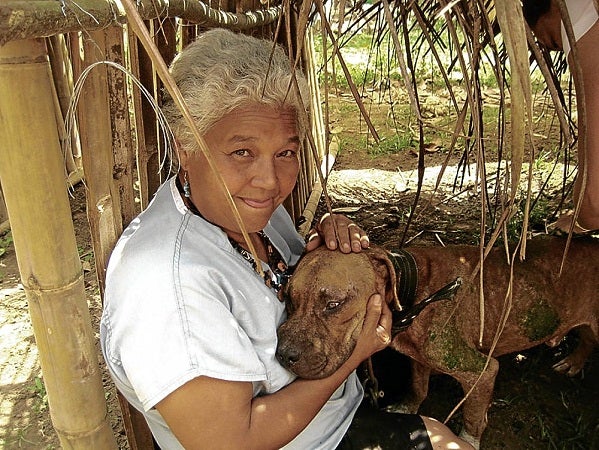 From California to Laguna, this pit bull mama wants to save them all

How do you keep going? It can be heartbreaking.” Nena Hernandez is talking about losing a dog, and she’s crying.

“Sometimes we carry it, and we have to learn to let it go. A few days ago, we lost a dog here. The fact that he died free helps us, and that I was”—her voice cracks, and you can almost hear her heart shatter as well—“I was able to hold him and kiss him and say, ‘Sorry for what the humans did to you,’ and to show he was loved even if I didn’t know who he was.”

Then she takes a deep breath, pauses, and her jaw hardens with visible resolve. “To some people, these dogs are worth nothing but blood money. And that’s not right.”

Nena Hernandez is, to put it succinctly, a force of nature. She’s white-haired and round-faced, like the cuddly “tita” she is to many in dog-loving circles—but she also walks with a determined gait, puffing on a cigarette, dressed in no-nonsense shorts and scrubs stained with medicine and mud from the paws of the many pit bulls she doesn’t hesitate to hug.

And here in San Pablo, Laguna—where volunteers and animal welfare groups are working hard to keep the 216 survivors of the latest dogfighting bust alive—that’s a lot of pit bulls.

When fellow animal welfare worker Maria Parsons brings her a jar of a homemade mange solution made with herbs and coconut oil, Hernandez troops to the nearest mangy dog, plops herself down in his makeshift cage, and wipes the solution on the animal, who licks her face before cuddling up against her bosom, eyes closed in immediate, absolute trust. “You smell like pesto!” she exclaims. “That’s it, we’ll call you Pesto.”

Hernandez, who heads the Cebu-based Island Rescue Organization (IRO, Cebuano for “dog”), which she established in 2010, is in Manila to check on the latest victims of this deadly syndicate.

At the site, a former coffee plantation in Brgy. San Gregorio, she is deep in discussion with other volunteers like Beth Sizemore, the US-based founder of IRO’s Samar branch, who spends several weeks a year in her native Catbalogan to check on her shelter. This time around, Beth has extended her stay to help with the Laguna dogs, which are now in the care of IRO and the Manila-based Compassion and Responsibility for Animals (Cara).

“Oh, she’s very emotional,” Sizemore says of her friend, whom she first hooked up with in California through Facebook—two Filipinas crazy about the breed. “But she’s also a very strong lady.”

After the dogs spent over a month at the Philippine Animal Welfare Society (PAWS) shelter in Quezon City, they sailed to Cebu last January inside container vans, with expenses and work all donated by Cebuanos.

“It blew my mind how the dog lovers, businessmen, and breeders all got together. It was, like, ‘Welcome to Cebu!’”

The dogs are now being rehabilitated in what has become the first pit bull rescue center in the Philippines, located on a grassy mountainside and known simply as “the bukid,” and “full of positive energy,” Hernandez says. “It’s historic. And even those dogs we lost—this is part of their legacy.”

Although the Cavite dogs were in worse shape than the Laguna dogs, there are three times as many dogs in San Pablo, and their guardians are keen on transferring them immediately to a different site.

“What bothers me are the chains,” Hernandez notes; while the Cavite dogs were confined in small, rusty cages, the Laguna dogs are held to the ground by thick, heavy chains that limit their movement.

“That’s done on purpose, to repress their energy so that when they’re thrown into a pit, they go off like time bombs. These dogs are athletes; it’s like tying up Manny Pacquiao so he can’t move.”

The deep understanding of the breed is extraordinary for a woman who, until six years ago, didn’t even own a dog.

Nena Hernandez was born and raised in Manila by a Cebuana mother and an Ilonggo father, and went to Catholic girls’ schools; she was even kicked out of one.

“When I was 18, I wanted to be a nun,” she says, eyes rolling. “I guess I always had a thing for underdogs, as well as animals.”

She moved to the US in 1969, arriving in the middle of the Peace Movement and anti-war activism, “which was what changed me,” she recalls. She was also an anti-Marcos activist, and proud of it, she adds.

Working in government and social welfare, Nena got married and had two sons before she went back to school to finish her bachelor’s degree—and was told by a counselor that she would make a great lawyer. She eventually earned a law degree from the University of Wisconsin in Madison.

She was a practicing immigration lawyer in Fresno, California, who didn’t have time for a pet, even if she loved animals. Then, in 2006, her son gave her a pit bull puppy named Barqs, who would open her eyes to the plight of the breed in the US. “I didn’t have the prejudice, and that helped me.”

Hernandez was also transformed when she rescued a pit bull named Libby, set to be euthanized in a shelter, sending Hernandez on a desperate search for a rescue organization that would help.

She found the WorldHeart Foundation of actress Linda Blair (of “The Exorcist” fame) in California, and that marked the beginning of Hernandez’s work in pit bull rescue.

Hernandez would soon establish Fresno Bully Rescue. After saving over 200 pit bulls, she has been bitten only once—by a dachshund. Barqs was soon joined by Chimal and Derrick, both pit bull rescues.

Already a widow, Hernandez came home to the Philippines in December 2009 for a simple reason: to spend more time with her 87-year-old mother.

“Oh, she’s strong as an ox,” she says with a laugh. “But driving to court one day in the US, I felt a pain in my heart, and realized that if she passes, I’ll never be there in time. I just decided that money is not important.” Also, despite many years in the US, Hernandez says, “I never felt I was at home; it was always, ‘I’m going home.’”

She now holds dual citizenship, and still does online lawyering work, but “90 percent of my time is spent on animal rescue. This has become my priority. I remember my son telling me that he never saw me as happy as when I started doing this. I guess I’m back to my essence.”

When she has to decompress, she watches her pack—she brought her three dogs to Cebu, and they’ve been joined by family dogs and rescued asPins. “Then I watch dumb TV so I don’t have to think, or I spend time in the bukid with the pit bulls, under the stars. I know it sounds really hippie, but I don’t care.”

Hernandez says they are out to save as many of the Laguna dogs as they can. “We couldn’t shut our eyes without saying that we tried.”

On their urgent wish list for the dogs are dog food, cement, cyclone wire for fencing, old crates and cages, and old towels for the sick dogs, as well as financial aid.

“Then we really have to work on amending the law,” Hernandez emphasizes, referring to the weak Animal Welfare Act that carries a fine of P5,000—peanuts for the Korean dogfighting syndicate that made more than a million pesos a day.

“Then we have to address not just the syndicate, but the backyard breeders who sold these dogs to the syndicate. These are the Filipinos who have to be made accountable.”

Chances are, with the broad network of pit bull owners and breeders, people already know who they are.

“Still, we’re not Rambos, and we’re not responsible for implementing the law,” says Hernandez, who turns 60 this year.  “We’re the caretakers who come in and help the victims.”

Can the Cebu experience be duplicated in Laguna?” To borrow from Hillary Clinton, it takes a village, people from all walks of life, to gather and work together.

Nena Hernandez’s dream, she says, is “a paradigm shift. We have to work on our children, so that future generations will not need this. My dream is that, one day, animal rescue groups no longer have to exist.”

With that, the angel of the pit bulls gets up to cuddle another dog—this most misunderstood, maltreated and abused of dogs. And the dog cuddles back. It’s enough to bring tears to your eyes.

For donations in kind for the Laguna pit bulls, contact Homer at 5210865. For cash donations, go to www.caraphil.org.