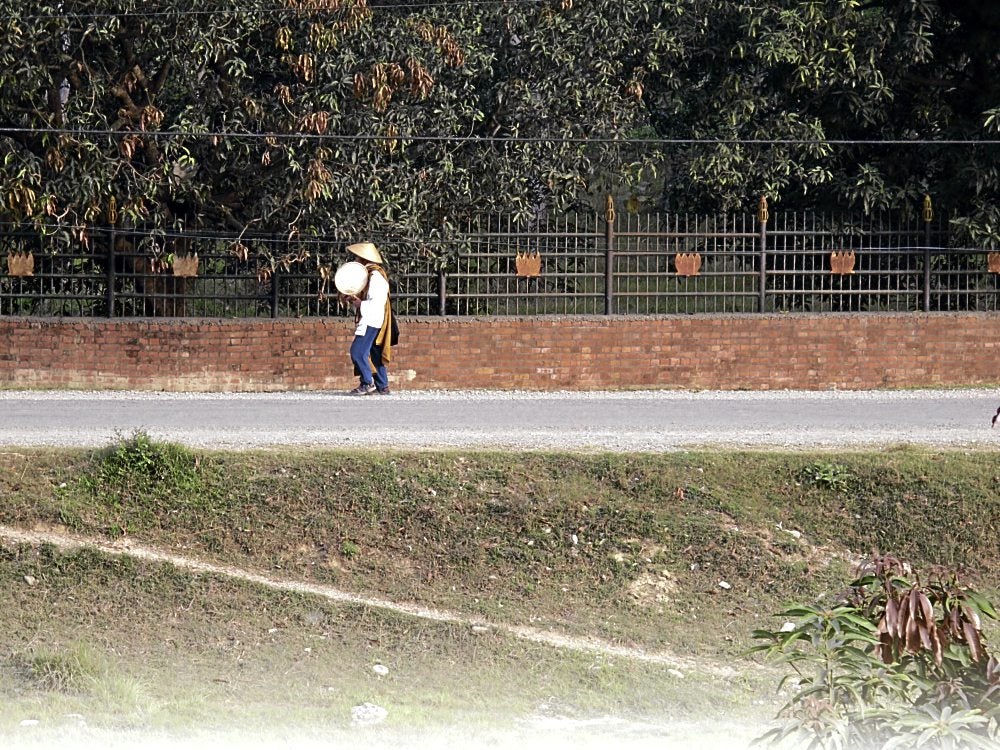 AWANDERING monk walks along the side of the road meditatively beating his paddleshaped drum.

Between two worlds in Nepal

On my first night in Lumbini, I woke up before dawn to the measured, deep sound of bells from the Tibetan monastery down the road,  calling monks to early morning meditation.

Following soon after came the distant sound of a single drum, becoming louder as it approached my window, until I saw a solitary monk in yellow robes beating his flat, paddle-shaped drum in cadence with his measured steps.

I met a wandering monk on a previous trip here who told me his sect vowed to give up a permanent home in exchange of wandering the world on foot, beating their drums while walking in search of enlightenment.

Despite the sound of jackals piercing the early morning silence, the stillness of Lumbini makes some pilgrims feel that enlightenment could be within reach. However in the villages outside the shrine, the local community has different priorities as it struggles to survive from day to day.

Lumbini is a place between two worlds, of Buddhist serenity clashing with the poverty of everyday life on this dust-covered corner in rural Nepal, where there are only two small general stores, one restaurant, and an irregular bus that picks up passengers for Bhairahawa, the closest town half an hour away, where all supplies come from.

In Nepal, “power shedding” means four to six  hours without power each day. Our office genset had not yet been delivered, so we sweated it out, worked in dim light, stopped work when our laptop batteries discharged, and reconnected with the outside world when our WiFi snapped back to its intermittent life after power returned.

It was useless to complain; the only thing to do was to simply accept whatever came.

The hallmark of Lumbini is its aura of benevolent neglect. Everything, despite its incremental development, has stood still for a very long time.

“Lumbini Center is  at the intersection of the Siddhartha Nagar-Taulihawa Road, which is expected to be the principal approach route to Lumbini Garden,” says the pile of reports on my desk. That is just what it is, a crossroads and nothing else.

Nothing that you see from that crossroads even hints at having arrived anywhere, much less to a sacred place.

The intersection, the only route to the Lumbini Garden, is nothing more than a dusty crossing that looks as if it leads from nowhere going toward anywhere. There stands a skeleton of a village, a loose cluster of low mud structures under the scorching sun.

A bit farther down the road is the even dustier entrance to the Lumbini Garden, a 1- x 3-mile protected area whose heart is the Sacred Garden, birthplace of the Lord Buddha, inscribed on the World Heritage List.

A stone pillar erected in 249 BC by the Mauryan emperor Ashoka still stands in the Sacred Garden. An inscription on the pillar attests to its being the birthplace of the Buddha.

Centuries later, an archaeological dig revealed the well-worn stone a few paces away from the pillar that marks the exact spot where the Buddha was born.

Lumbini is one of the four holiest places in the Buddhist ambit that draws pilgrims from the Buddhist world. The other three holy shrines are in India. Mahabodhi temple in Bodh Gaya shelters the sacred bodhi tree where the Buddha attained enlightenment. Shortly afterward he preached his first sermon in Saranath, and ultimately passed into nirvana at Kushinagar, where he was cremated.

At the Indian Buddhist shrines, pilgrims flock to massive temples and stupas. The Lumbini experience is different.

Situated in the flat, rural Terai Plains of Nepal only 9 km  from the Indian border, here pilgrims have no temple to pray in, arriving instead at an open space surrounding the birthplace of Lord Buddha overlooking broad, flat agricultural fields that stretch to the snow-capped Himalayas on the horizon. It is a Zen experience, arriving to nothingness.

In 1978, the United Nations commissioned the renowned Japanese architect Kenzo Tange to prepare a master plan for the Lumbini Garden. Tange carved out a 1- x 3-mile rectangular area, divided it into three equal sectors of 1 sq mile each.

The northernmost sector is the New Lumbini Center, where the museum, auditorium and Lumbini International Research Center are located in imposing all-brick structures, vaulted buildings designed by Tange in the 1980s.

In this sector the everyday facilities are to be located—hotels, hospital, administration office, visitor information center and facilities such as ticket booths, shops, toilets, restaurants and banks, bus terminals and parking lots.

Not much of this sector has been constructed, only the research center and museum stand today.

The central sector is the Monastic Zone, where Buddhist countries have constructed monasteries which shelter their pilgrims—Sri Lanka, Thailand, Myanmar, Japan, China, Korea, Tibet and, coming from a continent away, Germany and France.

At the southernmost sector is the Sacred Garden, the birthplace of the Lord Buddha, whose archaeological remains and Ashoka pillar are left untouched.

An enormous levee, a circular embankment enclosing an artificial lake, forms a protective layer around the sacred archaeological remains where pilgrims sit outdoors on meditation terraces.

It could be the way of the Buddha, that to reach stillness at the Sacred Garden one must learn to give up what one has taken for granted, like the comforts of home, power 24 hours a day, and just focus on the essentials that Lumbini can bring.