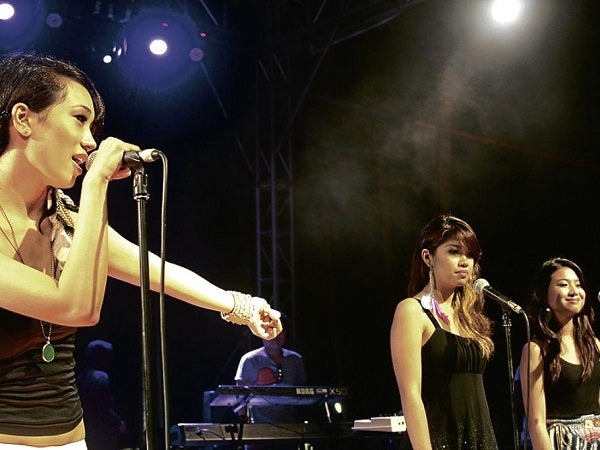 June Marieezy: The future of music

Looking back at my experiences from 2011, I vividly remember feeling a bit down on this certain day of December. That memory stuck to me like it did because I knew the feeling all too well: I had to say goodbye to yet another person. I’ve had many friends leave the country and have almost become accustomed to the routine of bidding someone farewell and maintaining a long distance friendship instead. Despite the familiarity of the feeling, I felt particularly affected this time, because this friend was not just another acquaintance. I managed to get close to her in a relatively short amount of time, and thanks to the group of friends we mutually shared, my eyes were opened to many values like supporting my country. Little did I know that she would be visiting us faster than anybody could say, “Malasimbo.”

I first met June Jumao-as when she was the vocalist of former indie rock band, Goodmorning High Fives. They were nothing short of interesting, with their unique yet appealing sound clinging to my memory. Intrigued by their music, I was lucky enough to bump into June when I was with a common friend, who ended up introducing us. From that moment on, I witnessed her transformation as an artist and as a person as well.

June is a full-blooded Pinay who was born and raised in the United States. She grew up in Dallas, Texas and came right back to her roots for college. Some may know her as a music production student from De La Salle College of Saint Benilde, others still see her as that edgy rock star singer, today however she is known as June Marieezy.

Currently an artist with Deeper Manila Records, she joined the local independent music label because of the common vision they shared: To inspire dedicated artists by pushing quality art—especially in the Philippines. Spearheaded by Justin de Guzman (JDG) and Kass Ilagan, Deeper Manila continues empowering the industry with a house, jazz, and hip-hop kind of feel that contributes greatly to the future of music locally and even worldwide. Budding musicians like August Wahh, Similarobjects, Raw, and more, are other unique artists that help make this label special. Through much hard work and dedication, the company has been striving for that recognition they deserve. Fortunately an opportunity presented itself in the form of an event called Malasimbo.

Malasimbo is a music and arts festival annually held in Puerto Galera that has been labeled as the Asian version of Coachella by quite a number of people. Handed the privilege to perform at such an event, June flew back to the Philippines to have her time on that stage, eager to show the best of what she had to offer the music community today.

Donning her trademark feather earring and her new bohemian look, she took the stage on the last night of the event. She treated it like any other performance, but the anticipation was what really racked her nerves. Being able to sing in Malasimbo was both a blessing and a challenge. Deciding to step out of her comfort zone, she agreed to perform with a live band instead of the usual show of her singing over beats by JDG. The struggle came in putting a whole group together and working with the band in such a short amount of time. On the day of the performance, she did not fail to deliver, being nothing but herself. Her mesmerizing voice, relaxing sound, and striking appearance were more than enough to fascinate the crowd. Their appreciation for her music was evident when the audience demanded for an encore.

The entire event was one big learning experience that was definitely worth the travel for those who were able to participate. It was good exposure for the artists in the sense of publicity, and also as a glimpse of what its like to work in the real world.

With that said, where the music industry expands, the immense surge of competition flows. That’s why all passionate artists, like June herself, aim to make sure that good music never goes unnoticed, and events like Malasimbo make this goal possible.

June has always embraced her Filipino heritage, and it’s something that she carries with pride. Her distinct persona has gotten her noticed in the Philippines more than anyone could have ever expected: Her music video “Sometimes” featuring RBTO had thousands of hits just a few days after launching on vimeo.com; collaborations with artists such as RJay of LDP were made; and articles written about her swept across the Internet. All this is just a stepping-stone to all the great things that the future holds for June Marieezy, and conquering the worldwide industry is the next goal.

Getting to where she wants to be is definitely more difficult than it seems, and it takes a brave soul to follow a dream that big. Jet-setting to different countries to meet new people are all key elements to her growth, therefore she always remembers the most constant thing in her life: Music.

The second sendoff was not any easier than the first time. If anything, it was more difficult to say goodbye. But I wasn’t as sad as before because I really understood the need for June to keep moving: It was all for the love of her craft. Her strong passion and fervor for music is very admirable, and I will bet anything that she’ll be back sooner than anyone can say “Superstar.”

June Marieezy’s EP “Heavy Eyes”  is available on iTunes. Her new single “Summertime” is on   iTunes, Amazon, Beatport and more. Check out deepermanila.com for more information and more music.