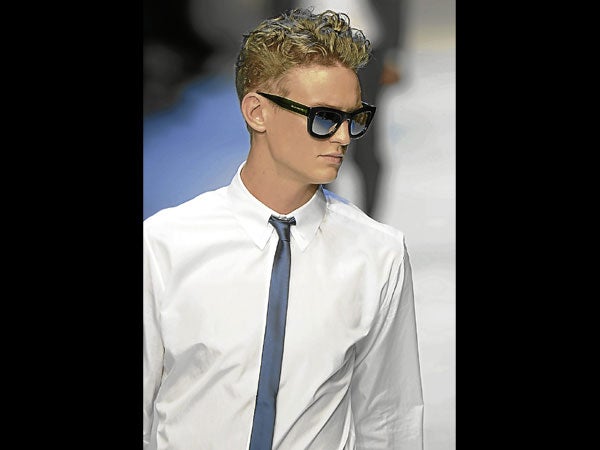 At the end of Summer 2012 Paris collections, it became clear it was really women designers who wore the pants.

The juiced-up suits, the David Bowie flourishes, the jolts of color everywhere will make the male species flamboyant and gaudy but in a good way.

After all, in nature, it is the male that has the finest plummage and the most painterly markings.

Perhaps pointing to the direction of the Summer Olympics next year in London, the looks were casual sporty.

The collections also featured all sorts of techno fibers that react well to sweat, as well as lightweight natural fabrics such as denim, cotton poplin and linen.

Big stripes and flame prints were featured at McQueen, and long tunics and kurtas at Agnes B.

At Versace, Donatella paid a heritage homage to brother Gianni.

For her Red Label, dame Vivienne Westwood gave her models olive branches on their heads and tee shirts with lots of sporty medallions.

Fashion is the true barometer of world moods and causes. And in Paris, it was style sportmanship at its very finest.

Let us decode the winning trends today. And may the best man win, at least in the wardrobe category.