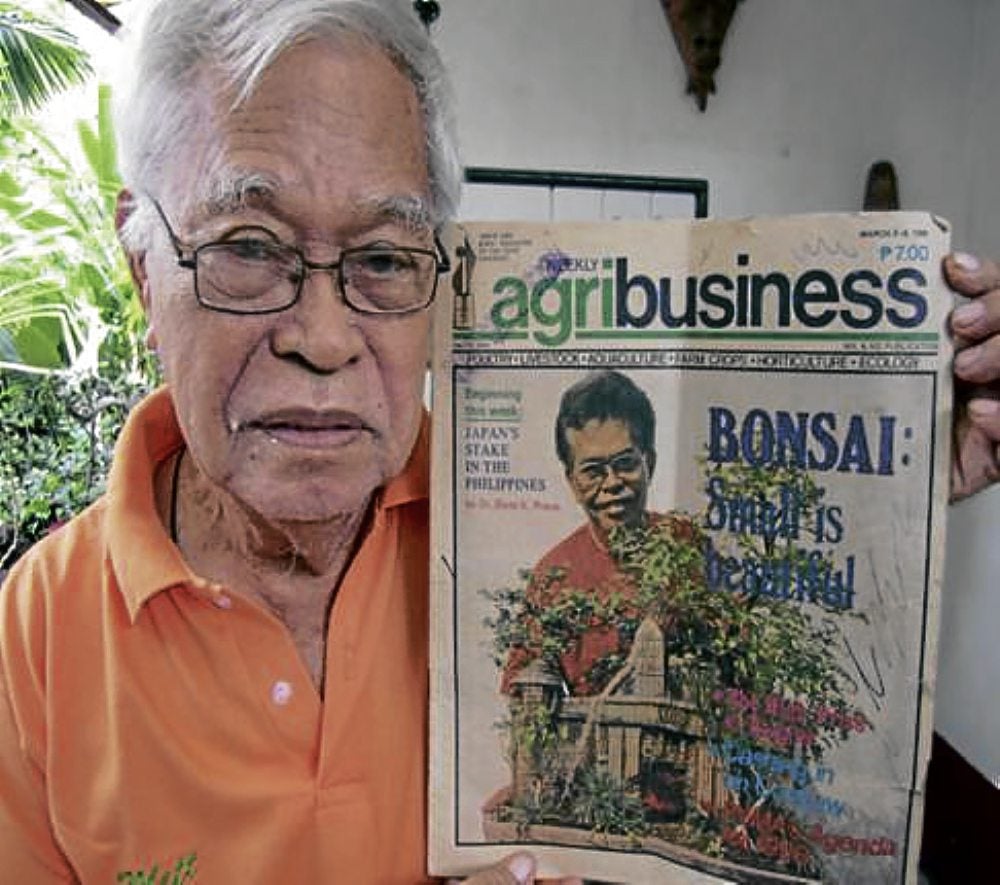 THE AUTHOR with his Intramuros Ruins as cover of the Agriculture Magazine in 1990.

Philippine bonsai artworks are world-class, too

The first civilization that practiced the art of dwarfing plants was the Chinese. They call it “ponsai.”

In the beginning, according to Chinese history, there was this plant artist called a “magician” for having created miniature rocky mountains with plants that became stunted or miniaturized due to the lack of soil. That started the idea of culturing plants in containers.

Plants were simply grown in rounded, basin-shaped clay pots, and eventually became miniature trees through the grow-and-clip method. They were usually displayed in the courtyards of rich merchants or leaders of the community, but taken care of by ordinary artisans.

It was said that one expert who was disgusted with the government ran away and applied as gardener with the Imperial household of Japan. There he practiced his expertise in the art of dwarfing trees, which eventually influenced the Japanese plant connoisseurs, who quickly developed it into an art.

They called it “bon sai”—“bon” means pot or tray, and “sai,” to plant. Actually, it means plants in pots or simply potted plants. Although the art originated in China, the Japanese word is more popular throughout the world. This was probably because the Japanese developed the art further with some innovations, and sharing it with anybody interested.

Yes, it was in Japan that bonsai art was fully developed. For example, they introduced different shapes and forms of containers, then classified the plants into styles such as upright, slanting and cascading, among others, and displayed their artworks in public for others to appreciate, most especially when Japan was opened to other countries of the world.

Bonsai in the US

As for the Chinese,  Wu Yee Sun, owner of Hong Kong Bank Ltd., who has quite a large collection of bonsai in Hong Kong, claimed that bonsai art originated in China. However, he credited the Japanese for perfecting the art.

In the Philippines, the Chinese who settled in Manila long before the Spanish colonization were already growing bonsai. This was mentioned by Spanish priest Fr. Pedro Cherino in his writings, “Relation delas Islas Pilipinas,” in 1590.

In Chapter 10, he described that the Chinese in Manila were fond of planting balete trees with the roots inserted in the crevices of coral stones placed in a basin with little water. When the plant was established with new leaves, they displayed it in an altar at the foot of their gods.

The word bonsai, of course, was not mentioned because the Chinese have another name for it. But the art is exactly the same as what we are practicing now, which we call rock-grown or rock-clasping bonsai.

We can therefore say that bonsai art was already introduced in the Philippines long before the Spanish times and probably before other Asian countries. But how come the art developed only sometime in the 1960s? This was probably because the Chinese kept it to themselves. Besides, our ancestors were not schooled, and unaware of such cultural arts.

Just recently I got an e-mail from a friend titled “Tiny Kingdoms.” I call it innovative in the sense that in most bonsai books published throughout the world, all you can see are just trees, either solo or in groups styled without any landmark.

Mariella Moon Tecca, who wrote in her website “Tiny Kingdoms,” described Takanori Aiba’s pieces as bonsai that look like mini trees in somebody’s Zen garden. She further stated that this Japanese artist “combines bonsai art form with Lilliputian architecture design to create some of the most stunning pieces you will ever see.”

Aiba, a plain bonsai maker and a maze illustrator, wrote in his website that his designs were derived from structures that are products of his imagination.

Tecca further said that it took Aiba three months to a year and a half to make each detailed piece.

One year to finish

The piece called Hawaiian Pineapple Resort, according to Tecca, took him one full year to finish, while another was completed in about six months.

Should anyone want to see Aiba’s creations, you have to go to Japan. He says that one of his pieces titled Hotel de Michelin is on display in his restaurant in Tokyo.

In comparison, I would like to show my bonsai called Intramuros Ruins. I’m proud to say that this was the cover of Agriculture Magazine edited by   Zac Sarian, in the issue dated March 2-8, 1990. At that time the art was 15 years old, so as of this writing, it is now about 37 years old.

Takanori Aiba’s pieces were probably created about 10 years ago. This shows  that I originated the landmark idea earlier.

As founder of the Philippine Bonsai Society (PBS), I was asked to exhibit my piece sometime in 2004.  This was held in Shangri-La Mall. However, the organizers seemed reluctant to give the plant a better location, displaying it in an unlikely position.

Probably they considered it not worthy just because it was an innovation of a Filipino, or probably because such an idea could not be found in bonsai books. Now that the Japanese artworks are considered stunning pieces, Filipinos seem to look up to them, too.

To my fellow bonsai growers, let’s not limit ourselves to the traditional ways. Art should evolve, so let’s introduce innovations. In other words, let us not just copy what foreigners are doing.

Our bonsai art is already world class and can compare with, if not surpass, the works of other artisans in Taiwan, China, or even Japan. You should know that our local materials are as beautiful as those of other countries, most especially our Bantigue.