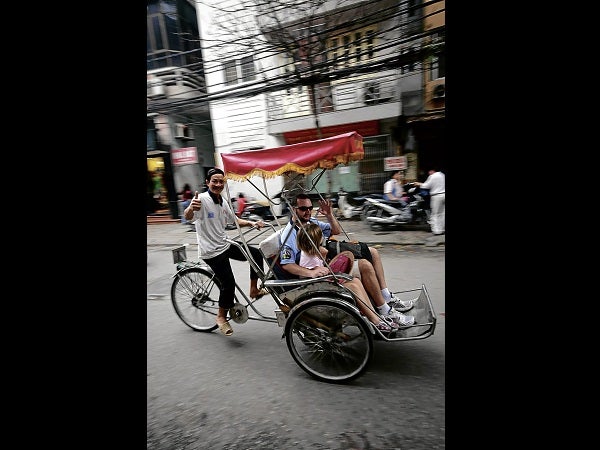 Thirty-seven years after the end of the Vietnam War, the country’s cultural and official capital, Hanoi, still seems mysterious to many Filipinos.

They’re familiar with Saigon (now Ho Chi Minh City), the country’s commercial capital teeming with life, but mention of Hanoi sounds forbidding, a citadel in the northern highlands surrounded by myths and folklore.

“There are only over 200 registered Filipinos living in Hanoi,” says Philippine Ambassador to Vietnam Jerril Santos. “But they like it here because the economy is stable. And security is not an issue. If you’ve noticed as soon as you arrive at Noi Bai Airport, they’re not too strict with inspection.”

This is just one of Hanoi’s many come-ons for tourists. There are, of course, the ancient temples, pagodas and historical monuments; the traditional arts and artifacts in the streets (lacquerwork, ceramics, old propaganda posters, embroidery art, Vietnamese silk, water puppets); the French-influenced foodstuff (baguette, coffee, cuisine with flavors subtler than its Oriental cousins’); the mild climate and scenic lakes. And, Halong Bay is just over two hours’ drive away.

Most important to tourists, shopping in the Old Quarter is relatively cheaper. ($1 is about 21,000 Vietnamese dông; P1 would be about VND500; so if you have P2,000 in your wallet, you’d be a millionaire in Hanoi.)

Vietnam had six million tourist arrivals last year, but only some 17,700 Vietnamese tourists visited the Philippines. This is predicted to double this year with the newly opened direct flight between Hanoi and Manila.

On March 17, Cebu Pacific Air launched its twice-weekly flights between Manila and Hanoi. This is the only airline in the country servicing this route. Its Saigon-Manila flight was launched in 2008.

The maiden flight was joined by President Noynoy Aquino’s sisters Ballsy, Pinky and Viel, as well as Vietnamese Ambassador to the Philippines Nguyen Vu Tu and wife Tran Thi Lan Hinh; Philippine media members; and Filipino theater artists slated to perform in Hanoi to mark 36 years of diplomatic relations between the two countries.

The direct flight took only 2˝ hours. Manila is an hour behind Hanoi.

Two days later, a press conference was jampacked in a hall of the Hanoi Opera House (built by the French in the Art Nouveau style, really impressive).

Remarked Gokongwei, “The addition of Hanoi to our international network means that we will now be able to cater to the air travel needs of a broader Filipino and Vietnamese market. Cebu Pacific becomes the only Philippine carrier to serve both the northern and southern areas of Vietnam, providing more access for Vietnamese residents to enjoy the shopping, eco-adventure and entertainment attractions the Philippines has to offer. This will also open more avenues for business collaboration as well as trade and investment opportunities.”

The audience was treated to the Department of Tourism’s latest ad campaign, a music video so arresting even in its raw copy it made every Philippine delegate proud to be a Filipino.

In his response, Minister Van Tinh pointed out Halong Bay and the Palawan Underground River had just been included among the New Seven Wonders of Nature—a common ground that both countries must celebrate. “You have your tourism slogan ‘It’s More Fun in the Philippines’ and we have ours, ‘The Timeless Beauty.’ So we’re both happy. Let’s visit each other’s country.”

That evening, heavy cocktails were served at the lobby of the opera house, where guests whirled and strutted in Filipiniana, traditional Vietnamese and business attires. The Vietnam-Philippines Friendship Concert that followed was graced by the Aquino sisters, whose presence at the theater’s presidential box was acknowledged by Minister Van Tinh in his remarks.

Ours were two soaring sopranos: Joanna Ampil, a West End singer-actress; and Rachelle Gerodias, whose supple voice ranges from frisky to doomy arias. Plus international pianist Raul Sunico, president of the Cultural Center of the Philippines.

As part of the celebration of the two countries’ friendship, the same concert was slated to be performed in the south. The following day, the Filipino performers and officials, including the Aquino sisters, were off to Ho Chi Minh City—Saigon, Vietnam’s largest city, where some 5,000 Filipinos were living.