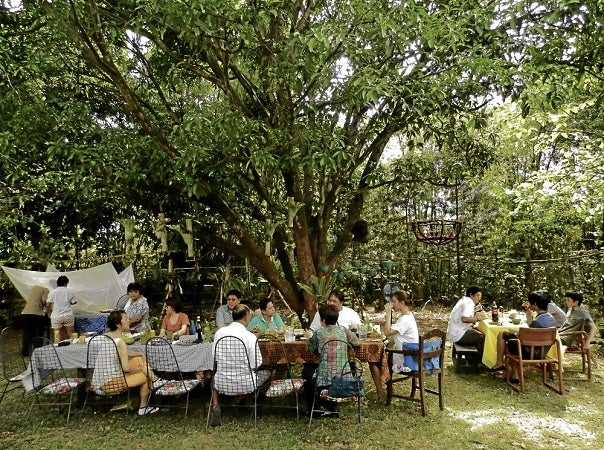 Notes on a garden party

We are a family of cooks, gardeners and musicians (except me), artists (ehem), and pretend-interior and exterior designers.

Wendy is the only pro in some of those callings. She lives in Antipolo, and it was her birthday. As always, in parties for the family, we make do with whatever is there. We never have caterers or decorators and are so cocky-sure that everything will just look and taste great.

It must have been the hottest day of April, so Wendy decided to locate the party under a cluster of trees.  The property is a hectare, and so the trees are plentiful—pili, mango, lychee, avocado, durian, cacao and chestnut (if not yet dead). The chestnut tree used to bear small green fruit which had a pleasant taste, a little like raw camote, and its sapling (when potted) can be braided as it grows, like the ones sold in Chinatown on New Year.

On the trellis over the gate is a tangle of anonymous vines with white flowers. They smell like rice newly cooked in pandan leaves, and that’s when you know you have arrived at Wendy’s gate.

Sunbirds, fantails and hummingbirds with long beaks are flying around the property, and some are shamelessly bathing under a leak in the overhead water tank. There are bees and butterflies, too, and a couple of snakes.  A chameleon that looks like a small dragon sometimes shows up, and even a pregnant wildcat is wandering somewhere among the coffee trees.

They have a resident owl, two crows, also a kingfisher whose lifelong ambition is to catch one of the carp in Lanelle’s pond next door. Six white Siamese cats (forever chasing birds and frogs) live with them, as does a dog named Dan Brown because he belongs to Dan, the handyman, and he is brown.

Today, the bamboo armchairs with big cushions have been positioned in the fern area which is coolest. Staghorn ferns cascade from the trees and we are surrounded by giant Boston ferns and Birds’ Nest and Sensation and the rarest one of all, which is planted in a leaky bathtub because Wendy collects them (ferns and old bathtubs).

The Regalados have no maids. So the three strapping boys and their strapping dad, have, the day before, hauled the old fridge and two electric fans out to the garden, plugged to the longest extension cord in existence.

The main table had a black and white retazo tablecloth, and the handmade dishes on it had black zebra stripes. The silverware had black kamagong handles that no one makes anymore. There wasn’t enough table for all of us, so another was annexed to it. The addendum had a brown and ochre batik cover and brown stoneware plates and amber-colored drinking glasses.

Huge, deep, bright yellow bowls held chilled red and yellow watermelon chunks with slivers of Laguna cheese and mint leaves. There could have been edible begonia petals in the green salad, too, but the begonias were not in bloom.

A smaller table, which I was attracted to, had a dazzling yellow mesh table cover and the same amber glasses. But teenagers claimed it for themselves.

The menu: Roy had made great dips—a chicken liver paté for crackers and a yummy fresh dulong with olive oil dip.

Tasting of the sea

Season with ground pepper. If dulong is very fresh, no need to put salt, as it tastes of the sea. If not that fresh, a little salt is necessary. Sauté quickly to avoid burning.

There was also a malunggay, spinach and artichoke dip (not too popular with carnivores). Pia Lim’s guyabano chutney was incomparable and went with everything. Carlo, the honor society grandchild, had prepared the smoked salmon curls with dill leaves (from the garden, of course).

There were two simple main dishes—large shrimps (alive when bought and jumping when boiled) to be eaten with squeezed dayap (lime picked from the surroundings, as well). The other was fresh corned beef.

The corned beef has a sad story attached to it. The Regalados have this old-fashioned wood-fired stone oven which gives a smoky flavor to whatever is cooked in it, and therefore the corned beef. Three hours, the day before. But while it was cooking, Roy, who was blowing into the fire, lost his balance, slipped and fell face down on the wet floor.

So he emerged for the party the next day, his forehead all banged up, but not sick enough not to bring out the German beer and the Chinese Tsing Tao.

On each of the tables were carved Tagbanwa animals from Palawan, which served as paper napkin holders. Scattered around them were palm sugar packets for the coffee, boiled pili fruits (which are peeled and eaten with patis), a big jar filled with toasted cashew nuts, newly harvested avocados, dayap and paho.

Soon, the invasion of Hungry Beings swooped down and the food disappeared, including the durian pie and the deadly chocolate cake. Everything edible on the table was deemed good enough to be looted and stuffed into bags. The sad remainders went to the cats and Dan Brown, and the birds swooped down and finished off the crumbs.

It was a great birthday.