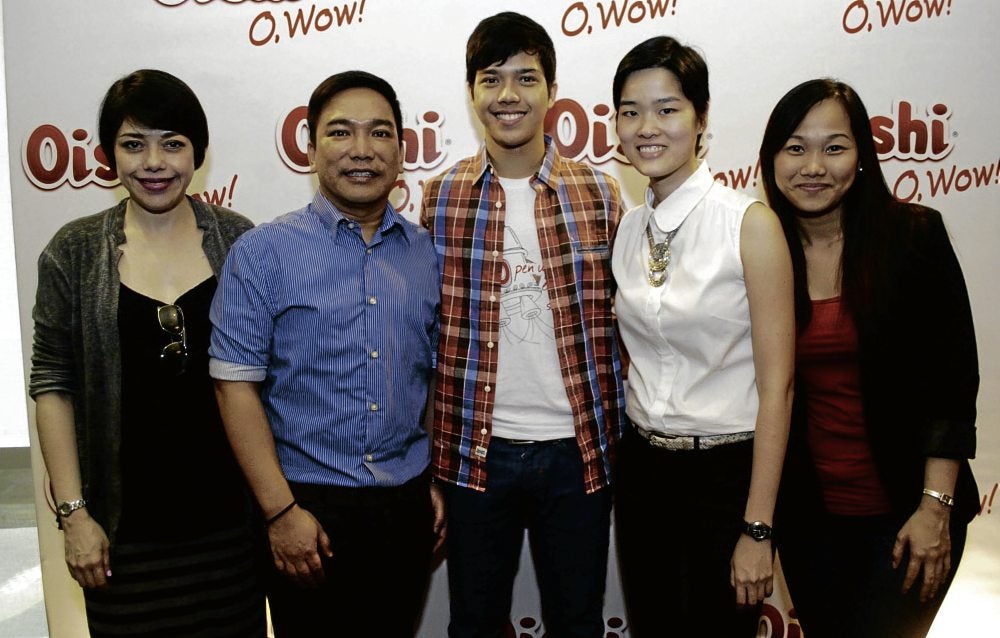 Life is full of ‘O, wow’ moments for this young actor

Elmo Magalona believes that dodging the negative will help you survive and enjoy the challenging teen years. “Positivity affects your life—how you think, how you react to everyone around you. Easy to say and hard to do, but when you actually do, it’s really helpful.”

It also helps to enjoy the little things that come along, and to open up to everyday surprises.

The teen celebrity raps, sings, acts on the Sunday noontime show “Party Pilipinas,” and stars in the new weekly sitcom called “Tweets for my Sweets,” both on GMA-7. In between, he’s shooting a film with the working title “Just One Summer,” directed by Mac Alejandre. He plays lead opposite on-screen “love team” partner Julie Anne San Jose.

A lot of his fans are young girls, who are charmed by his good looks, and boys who admire his talent in singing. Elmo knows this fame is coupled with responsibility, and he has to set a good example. This is easy, he said, because he is the sixth among eight children, and is a kuya to two of them.

Elmo was born to a celebrity family. His grandparents are former actors Pancho Magalona and Tita Duran, and his father is the late Francis Magalona, known as the Philippines’ master rapper.

His older sisters Maxene and Saab are also in show biz, so Elmo is also expected to be a celebrity.

He just turned 18, but he has been living in his own for a while—major “O, Wow” moment for him. Whatever free time he gets, he spends with family and friends. Otherwise, he stays at home to “veg” out and catch up with digital games.

Moving out of his family’s Antipolo home was a “practical” decision, he said, since his new place is in Metro Manila and it allows him to become more independent and grow up. But there are things that he still doesn’t do on his own, like fixing his finances. His mom and manager Pia does that.

“Mom keeps track of my finances. It would probably be so stressful to do that!” he said. “If I get a little bit older, I’ll have the responsibility of handling it on my own.”

He has his place to himself on weekdays. On weekends, some of his younger siblings visit with mom Pia, who sees to it that he’s keeping his place properly. But who cleans up the house?

“I don’t like to be messy at all, so that I don’t have to clean up,” he said, laughing.

Gathering all eight kids, some already with their own families, is a rare, prized “O, Wow” moment, he said.

“My family is really into surprises, we like throwing surprise birthday parties like they did on my 16th birthday. I surprise them, too, with little gifts, especially my nieces and nephews.”

Catching up happens during holidays, like last Easter when they chose to stay in Manila and had an Easter-egg hunt in the Antipolo house.

“We hid the eggs, and the smaller kids looked for them,” he said. “Bonding for us means dining out, too.”

They love dining out and snacking at home. Among Elmo’s Oishi favorites are Marty’s Cracklin’ Vegetarian Chicharon “which is good because it’s not pork, but if you want pork, you can have the Baked Porky Pops chicharon. I like the hot and spicy one; I love spicy food.” His other favorites are Wafu wafers that come in leche flan and cheddar-cheese flavors, Pillows choco-filled crackers and the classic Oishi Prawn Crackers.

Another “O, Wow” moment for Elmo was finding out that he got admitted to the College of St. Benilde’s Hotel, Restaurant and Institution Management course. He graduated from high school when he was 15, and is now geared to study cooking. He also considered taking a computer course, because he is a self-confessed geek and is into gadgets, games, photography. “Something I got from my dad,” he said, smiling.

Elmo said that apart from his family, his fans contribute to a lot of his “O, Wow” moments.

“Someone gave me a bottle with colorful Post-Its, telling me that I inspired her with my music. One time, I was given a box of doughnuts,” he said. Elmo also assured that he regularly checks his Twitter account (@SuperElmo)  for fan messages even if he cannot reply to all of them, and appreciates the tweets. These small things, he said, add a jolt of positive energy to his day.