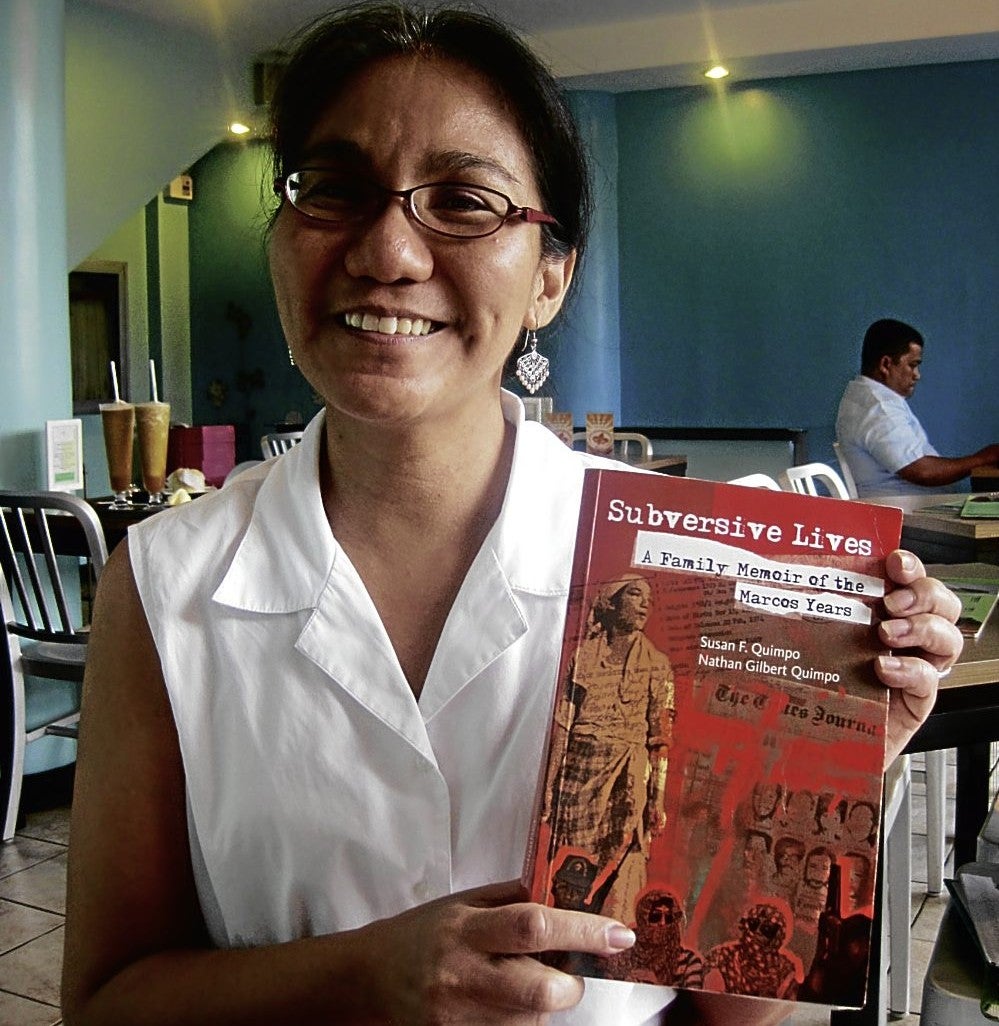 Sticks, stones, scalding water, electric shock, water cure, sitting on a block of ice, isolation, flaying—these and other forms of torture may have broken bones, even the lives and spirit of many political prisoners in the ’70 and ’80s.

But nasty words like “revisionist,” “renegade” and “traitor” that have been hurled against ex-revolutionary Nathan Gilbert Quimpo don’t hurt him. He surfaced from decades of “subterranean existence,” where he worked to help oust a dictator from the Right (President Marcos) only to become disillusioned and leave the same authoritarian tendency of a faction of the Left (led by Jose Ma. Sison).

He and his sister Susan are the main authors of “Subversive Lives” (Anvil Publishing), launched at the gathering of martial law witnesses and survivors at the Ateneo University in April. They gathered in the spirit of “never again.”

Even here, he still behaves like a hunted man, careful not to establish a pattern and avoiding socials. He says, “I’m here for short periods. I try to be as unobtrusive as possible.”

Their family memoir comes at the right time—the 40th anniversary of the declaration of martial rule. Nathan says, “People tend to forget. Many Filipinos today don’t see how bad it was then. You see Bongbong, Imee, Imelda Marcos still up there. How can they get away with it?”

The book took 10 years to write. Some siblings initially resisted uncovering painful memories. Lys, Norman, Emilie, Caren, Nathan, Lillian, Jan, Ryan, Jun and Susan lived through and went up against three authoritarian systems: the Marcos dictatorship, the CPP when its hard-liners prevailed and the Opus Dei.

Each sibling put their critical faculties at work in questioning, even fighting, the status quo.

Two brothers, all full-time members of the movement, died in the process: Jan, then 23, a desaparecido, is presumed dead, and Jun, 24, killed by his own comrade whom he had reprimanded for violating party rules and behavior. Their names are inscribed on the wall of the Bantayog ng mga Bayani in Quezon City.

The Quimpos are not unique in having had members who joined the movement. Nathan and Susan added the Hilao, Jopson Lacaba, Miclat, Salas and Tayag families to the list.

He said, “Many nameless peasant families sacrificed lives to the struggle. Their stories have not been told. We have to trace them.” What sets his family apart is they can all write.

Susan said, among her relatives, they were known as “mga matatalino pero nag-aktibista. Sayang.”

Emilie’s path was the opposite. Recruited by Opus Dei, she rose to be a numerary but underwent “vocational disillusionment.” She wrote how her family unraveled as activist siblings got arrested and tortured. Although her religious group had involved her in fundraising efforts, rules dictated that she couldn’t give a single peso to a disappointed Ryan who had a young family then and was deeply underground and came to her for help.

She saw how Opus Dei recruited peasant girls to serve as domestic help. They weren’t permitted to remit anything to their families from whom they were told to detach themselves. Everything was surrendered to the group.

Emilie wrote, “I noted that the Work of God did and continues to target intellectuals like myself, who cultivate the humanities, and who may not be rich, but they do so in the hope that these recruits will command excellent incomes due to their talents and abilities. The prized recruits are the technocrats…in short, people or groups who control the money and power in any particular country.”

Excesses of the Left

She may have spoken, too, for the sibling on the other side. They later realized the totalitarian excesses of the Left at various points in their lives.

Parents Ishmael and Esperanza sacrificed much for them to get a good education as the family’s deliverance from poverty. The father felt frustrated that his children got more involved in the movement that he once dismissed as foolishness.

While other classmates went to shopping centers or caught a movie on weekends, Susan, the youngest and enrolled at a Catholic girls’ school, accompanied Dad to detention centers to visit siblings. It was her political awakening.

Asked if the quest for radical change was worth the anguish of witnessing trust and betrayal among comrades, leaving parents and loved ones in a lurch plagued with worry and anxiety, losing their brothers, Ryan said, “Fighting the dictatorship was not only a choice, it was a duty placed on the shoulders of the youth of the First Quarter Storm generation. There was no choice between reform and revolution; martial law gave no room for reforms.”

Nathan said the current President is “well-meaning, but he hasn’t done anything to challenge oligarchic rule. To get land reform carried out, he would have to betray his own class.” He quoted National Artist F. Sionil José: “We love your mother, but she brought back the oligarchs.”

Susan, a therapist who uses art to address unresolved issues that cause illness and whose clients are mostly human rights victims and defenders and former underground movement members who need personal closure with their involvement in the revolution, looks back on those years “with gratitude.”

Lives on the line

She says, “I was in the company of people who were ready to put their lives on the line for a bigger cause. I joined rallies where the police or military would start shooting demonstrators. When the shooting started, I was always amazed to see how common folk—ordinary workers, students, urban poor—used their bodies as shields so that other protesters could run and seek refuge.

“Lawyers, teachers and socialites would step in and act as a negotiation panel to chastise, then beg, the military to stop shooting. People cared for others, regardless of social status, because they knew we were one fighting the Marcos dictatorship, protecting what was left of human rights.”

Asked if it was all worth it, she answered, “Most definitely. It was a time when you saw the best in the Filipino. What a privilege to witness all that. On a personal level, I learned much from the movement. Nearly everything I know now—organizing, fundraising, the impetus for writing, learning to view situations from a broader perspective, teaching/facilitating workshops—all these were honed in the movement.”

The siblings based in the Philippines focus on seeking justice for the victims and martyrs of the dictatorship.

Ryan said, “The torturers and killers who have been left untouched all these years must be punished. Families of the victims must receive just compensation far beyond the small sum distributed to them last year. The truth about martial law and the revolution of 1964-93 must be told to the youth and must serve as lessons for generations to come.”

Active in Claimants 1081 that represents 10,000 martial law victims, Susan recalled the reaction when the $1,000 compensation was announced. The members, activists from the ’60s to the ’80s, arrived at meetings, some walking with canes or on wheelchairs. The joke was the amount was enough to buy them their coffins.

Susan said, “I wish Filipinos would take to heart the lessons from history. The few times I watched the impeachment trial, I cringed when I heard some senator-judges referred to as ‘Your Honor.’ How can he be addressed as ‘Your Honor’ when history has proven that this man has not lived an honorable life and is guilty himself of serious human rights violations and outright stealing?”

She added, “Before we check off a name on the ballot, we have to look at the candidates’ personal history. Was he aligned with Marcos or Arroyo? What is the source of his personal wealth? Did he lie, steal or was he truly of service to his community? We can no longer afford to have short memories. We need to protect ourselves from politicians who reinvent themselves from one administration to another and continue plundering the little resources we have left.”