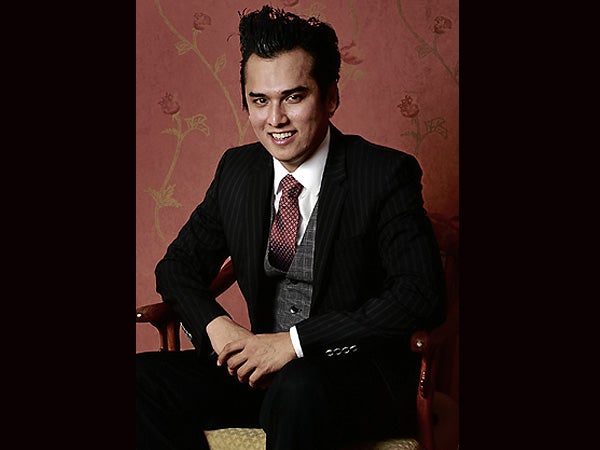 JOSEPH Calata with his signature waistcoat and rockabilly pompadour. PHOTO BY NELSON MATAWARAN

On a sweltering summer day, and belying a mean schedule, Joseph Calata looked fresh and relaxed as he strode into the lounge at Mandarin Oriental Manila.

He wore a dark three-piece Zara suit, his no-nonsense look offset by his trademark quiff and Rayban Wayfarers.

When the Philippine Stock Exchange (PSE) rings the bell on May 23, the 31-year-old self-made billionaire will become the country’s youngest businessman ever to list his company through an initial public offering. He will also become the youngest chairman of a PSE-listed entry.

Calata has transformed a modest family business into the country’s largest distributor of agriculture products and veterinary medicine. The net proceeds from Calata Corp.’s P270-million IPO are earmarked for the expansion of retail outlets nationwide.

“It’s also effective in getting international deals,” Joseph said. “If there are other countries looking for an agricultural company to invest in, it’s easier if the company is listed.”

The launch of Calata Corp. in the stock exchange is the highest point in his career so far. The company scored P2.7 billion worth of revenues last year.

It took some organization, calculated risks and luck for him to amass such a fortune. Instinctively, he adopted the principles embraced by billionaires: Save money, live frugally, keep the nose on the grindstone, create long-term plans, and make the best use of your resources.

“Outside of Manila, such as Bulacan and Nueva Ecija, everybody thrives on agriculture,” Calata explained. “We see only the roads and the stores but behind those are rice fields, piggeries and poultry farms. What I sell is the input for what people eat. For them to eat rice, fertilizer for the soil is needed; while the rice is growing, it needs agrochemicals. I also supply the seeds. In all, the life of rice is supplied by Calata. We also provide what pigs and chickens eat.”

Born and raised in Bulacan, Joseph speaks eloquent Tagalog and makes broad animated gestures with his hands, his face intermittently lighting up.

He has always been driven by high aspirations. He went to a Catholic boy’s school in Bulacan. At De La Salle University (DLSU), he took up B.S. Math but shifted to Management of Financial Institutions.

Enterprising by nature, he joined a networking operation that sold multivitamins and other food supplements. He recruited people and put them through a seminar to help him sell the supplements.

“I taught them everything about the products and threw in service opportunity strategies, and actively encouraged them,” he recalled.

After graduating from DLSU, Joseph joined the family business, J. Melvin’s, a poultry feed store in Plaridel, Bulacan. It had been incorporated under the name Planters Choice Agro Products established by his parents Eusebio and Isabel in 1978. The store was named after Joseph and his older brother Melvin. His father was an agricultural trader; his mother, a working student before she married.

Joseph said he’s moved by his mother’s sacrifice. She worked hard six days a week to provide her four children the best education possible. Before jumping in, Joseph observed that the business was run like a sari-sari store. The core product, animal feeds, would be weighed on the spot and handed to customers, and the money was kept in a money pot or in a drawer.

“I saw that the assistant could easily pilfer money if he or she wanted, whenever my mother went to the restroom,” he said.

“There was no audit, no POS (point of sale/transaction) checkout. At the end of any given day, the assistant could say, ‘Ma’am, we have P20,000 worth of sales.’ What if it was really P30,000? My mother would have no way of knowing because there was no inventory head. The store was probably making money because she was able to send all of us to school.”

Although J. Melvin’s had branches in Malolos, its main market were the farmers in Plaridel.

“The business was run Binondo-style. Mom was cashier and purchaser. She would  deposit the money in the bank. Ultimately, you couldn’t expand with that system,” said Joseph.

He envisioned the backyard business as a professional corporation. He bought an accounting software that took him a year to master and tailor-fit to the store.

“It was definitely trial-and-error but I wanted to prove that it could be done with patience and determination,” he said. “I asked myself, ‘Will I end up working in this store, merely giving change for animal feed?’ I decided to professionalize it. I worked 24/7. I could not make a new transaction if the previous day’s sales had not been encoded…because I saw how things would pile up. I wanted to perfect the system. I had to know how much we made every day. Was there profit? How much?”

Joseph was single-minded in proving that putting a system (and a paper trail) in place was the way to go. Although recording the inventory was tedious, it guaranteed accuracy. Joseph and a staffer would do separate inventories; he often spotted discrepancies.

Like anyone introducing innovation in a traditional setup, Joseph met opposition.

The customers now had to pass through him as the cashier so he could encode transactions. They found this method too slow. They grew impatient in the long queues and left in a huff. His mother and relatives asked him to dump his system because it messed up the business.

Eusebio thought his son was building castles in the sky. “I told him I would be like a Gokongwei one day,” Joseph chuckled.

His mother resisted additional expense, such as added manpower and a P2,000 printer.

Joseph was not about to stop. Out of his P8,000 monthly salary, he allotted P2,000 for his salesman who went around with a list of products. He also used his own money to buy the printer. “All I wanted was to increase sales,” he recalled.

His effort at computerization was rewarded when, one day, the records reflected a grave error. “It showed that P100,000 was paid twice to a supplier,” he related. Isabel was won over.

In 2004, Joseph took over the reins and expanded the business across Luzon. He was right to sense that the potential was huge. “There was a big demand for our products—feeds, agrochemicals, fertilizers. We just had to tap it.”

As the revenue sheets ballooned, Joseph earned the respect of suppliers and, soon enough, the banks. “I have kept a clean record with banks. As for the suppliers, I always honor my word. When they set a direction, I follow.”

By 2009, the company had earned P1.8 billion. It was renamed Calata Corp. It has since established a partnership with San Miguel Corp. (SMC) for the latter’s farm operations in Isabela and Davao, and chicken-raising for the Magnolia brand.

“We have 80,000 chickens every month in a climate-controlled system,” he said. “We plan to expand. In Davao, we plan to raise 500,000. Our breeder farm partnership with Monterey (San Miguel’s meat product brand) is in Isabela, the nucleus farm in the whole of Luzon. Meaning, we have the great-grandparent stock that SMC gives the breeders.”

He has earned the confidence of such companies as San Miguel Corp.-B-Meg, Syngenta and Bayer Crop Science. They appreciate his professionalism and sound corporate organization.

“I aligned myself with their vision,” he explained. He added he’s very straightforward in his dealings and put premium on integrity.

Ultimately, his accomplishments are founded on a compelling inner strength. “When there are problems, I’m focused—I don’t panic. I don’t give up easily. When there’s a problem, I see it as an opportunity.”