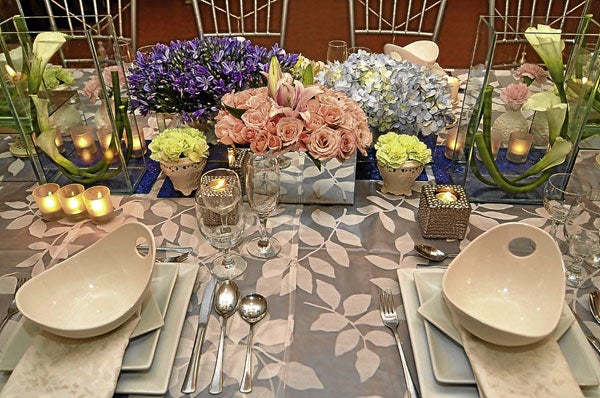 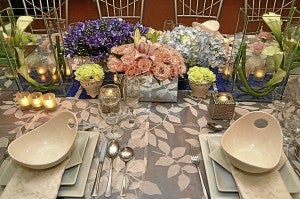 You can update classic floral arrangements by combining them with “sleek” modern pieces such as linear and mirrored vases. With a bit of imagination, you can even go for sculptural floral arrangements using such staples as long-stemmed calla lilies.

For our ongoing series of ideal table settings, floral designer and events stylist Teddy Manuel drew inspiration from an uptown New York wedding. Since it could work for a semi-outdoor lunchtime party, he went for an “airy” feel by combining flowers with vibrant hues in blush, baby blue, purple, hot pink and splashes of white.

“Normally, you just stick calla lilies in vases,” said Manuel. “This time, I twisted them into C shapes and put them inside short, transparent and geometric glass vases to make them look more sculptural.” 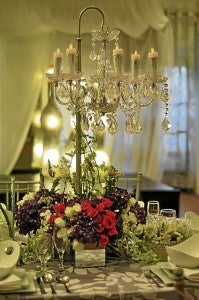 His other floral arrangements were short and bushy, consisting of baby blue and purple hydrangeas, purple agapanthus, hot-pink roses and stargazers and lavender alstroemeria. Apart from the calla lilies, Manuel used white orchids and pink snapdragons as accents.

“I then grouped the various floral arrangements by height,” he said. “Most of the flowers were sourced from the Philippines except for the purple hydrangeas. They’re all classic blooms given a new twist.”

Manuel also did sculptural arrangements using intertwined and twisted calla lilies, which he placed underneath several cocktail tables in another area of the room. Instead of the old practice of making the newlyweds go from table to table, he set up a cushioned bench on a raised platform a few feet behind the presidential table where the couple could sit and have their pictures taken with several sets of guests.

He also drew inspiration from the Sulô Riviera’s Manansala ballroom’s neo-baroque interiors. This was evident in a pair of small chandeliers, which he retrofitted and turned into table lamps. For a modern touch, he ditched traditional light bulbs in favor of LED lights made to look like candles.

“This ballroom has a very impressive chandelier,” he said. “I had this idea of putting up a smaller pair of chandeliers as part of the table arrangement to connect all three.” 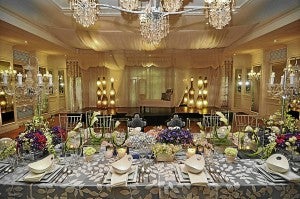 Manuel, a trained aeronautics engineer, toned down the look further by opting for textured and semi-translucent white table linen with swirling leaf patterns and lined underneath by silver fabric.

He also spruced up the backrest of tiffany chairs provided by the hotel with champagne gold silk tassels. To distinguish the couple’s chairs from the rest of their guests, Manuel borrowed a pair of black chairs with circular designs in silver also from the hotel. 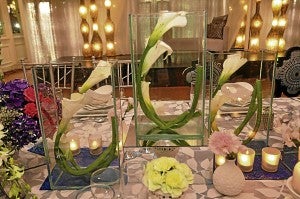 Manuel had shown an early interest in interior design, but in his desire to land a “more stable” job, he took up aeronautical engineering in college.

“I used to draw inspirations from images I saw in interior design magazines and tried to copy them at home when I was younger,” he said. “I’ve been in the events styling business for almost a decade now.”

As far as weddings go, the trend now is to go thematic, he said. Manuel also does debuts, anniversaries and corporate affairs. He has done everything, from Grecian to woodland, but his favorite theme is still Filipiniana.

“I always love doing Filipiniana-themed events with a twist,” he shared. “There was a time I drew inspiration from award-winning furniture designer Kenneth Cobunpue. Instead of using lots of flowers, I went minimalist and used intertwined abaca.”

During the wedding reception of actress Roxanne Guinoo and businessman Elton Yap, Manuel surprised the couple by producing a series of giant balls made of intertwined steel containing lit faux candles made of LED. From the floor, the biggest ball rose up slowly to the ceiling before the couple made their grand entrance.

“It was my take on the giant ball that rises yearly in Times Square to welcome New Year,” he said. “That’s why this business is more than just about flowers. You also need good technical support to make sure your ideas would work without anybody getting hurt.” 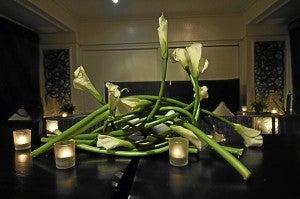 Manuel’s interest in interior design never left him even when he was already working as a ground crew for one of the country’s airlines. When one of his friends asked him to assist her with the floral arrangements for her wedding, he gladly accepted.

“Back then, there was no such thing as a floral designer or events stylist,” he said. “Everyone was simply known as a florist.”

From then on, he continued to moonlight as a florist while working full-time as part of the ground crew. Apart from his two jobs, he was also taking up his MBA at the Ateneo. He eventually had to choose.

“I was multitasking for more than two years, but it soon became unmanageable as more and more people started calling me to do their flowers,” he said. “Since I was at the office most of the time, they had to call me there. I decided to resign.”

Manuel took up a floral arrangement course at the Technology and Livelihood Resource Center and never looked back. Through the years, he supplements and updates his knowledge by reading up and attending informal seminars abroad.

Apart from doing renderings to present to clients, Manuel does a mockup of the actual floral arrangements for them to see. Once the contract is signed, he photographs the arrangement and files the images.

His team of florists will execute them a day or two before the wedding. Apart from several florists, Manuel also has people who do linens, accessories and carpentry work. He beefs up his core staff of 13 people depending on the need.

“I do renderings and mock-ups to minimize if not eliminate surprises,” he said. “At the end of the day, the couple has the final say. I want their personalities to reflect on the event itself. Our job is to simply guide them, provide them with the best options and execute what has been agreed upon.”