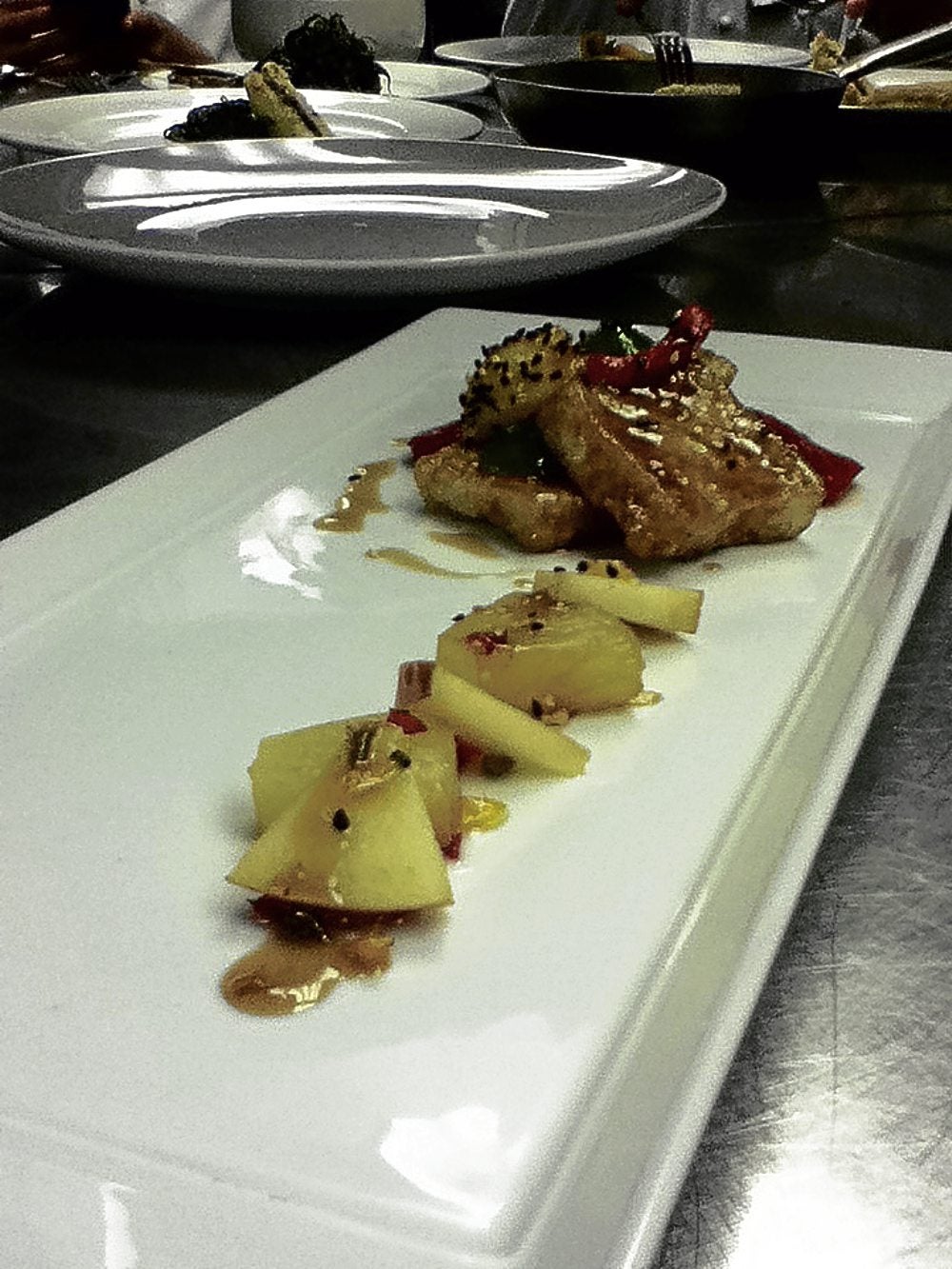 Sabouri and Cheng are scholars of culinary arts at the Woosong University in Daejeon, South Korea. They are two of the top students of the Center for Culinary Arts-Manila (CCA) that sent them to Korea as international exchange students.

Sabouri and Cheng applied for the scholarship and passed with flying colors. They flew to Korea to study Global Korean Culinary Arts for nine months with three-month apprenticeship.

Along the way, they are expected to promote CCA and Filipino cuisine. They’ve been studying Korean history and food since March 13.

“It’s been a blessing that we got this Korean scholarship,” says Sabouri, who was born to a Filipino mom with Spanish ancestry and a Persian dad. “It was quite scary at first, with the new surroundings and all, but I was extremely excited at the same time.”

“This is my longest time to be away from home,” says Cheng, whose parents are both Chinese from Fujien province. “But, I believe this experience will teach us to become more independent and self-reliant.”

Both students compare Woosong University to the University of the Philippines—huge school, lots of students from different social classes, and with big dormitories on campus. Their dorm is just a five-minute walk to Woosong Culinary Arts building. They felt welcomed right away by their fellow students, mostly Koreans who hardly speak English.

“We never felt discriminated,” says Sabouri. “In fact, we get this feeling that they want to befriend us but are hesitant to approach because they couldn’t speak English.”

Even the Korean professors hardly speak English. Their medium of instruction is Korean. Sabouri and Cheng have no choice but to learn the language. They carry a Korean-English dictionary wherever they go.

“We have modules written in Korean so we need to exert extra effort to translate it into English,” Cheng says. “Sometimes, we ask our classmates who know little English to translate the lecture or at least the ingredients to us. We understand the procedure as the lecture goes.”

Examinations are practical and written in essay form. Examinees must explain what they learned in Korean Royal cuisine, for instance. Soon, they will tackle Palace cuisine, kimchi-making, rice-cake making and side-dishes making.

“Korean food focuses more on spices,” says Cheng. “Traditionally, they make everything from scratch, like the soy bean paste, red-bean chili paste and kimchi, and they make them in big batches. It’s interesting that you can see their culture in their food.”

According to Jenny Bunagan, a Filipino professor in Woosong who stands as their guardian, these two good-looking students are like heartthrobs when they walk on campus. Korean girls are smitten with them.

“Girls have crushes on them, especially on David with his mestizo features,” Bunagan says.

“But the girls are so shy to come near them.”

Sabouri denies it, of course. He still prefers Filipino women.

“Nothing compares to Pinays,” snaps Sabouri. “Even if Koreans look very pretty, there’s still a language barrier. No feelings involved.”

Sabouri has no girlfriend and hopes to meet someone who’s sweet, caring and God-fearing.

When he finds one, his idea of a romantic date is a dinner for two at a three-Michelin-star restaurant in Paris as his favorite boy band, Boyz II Men, sings love songs till the night is over.

Cheng was seeing someone before taking the scholarship.

“But since right now I’m in Korea, we’ve both decided to stay as friends and see what will happen when I return to Manila. If it’s God’s will, I hope we end up together.”

In the meantime, both students focus their time and energy on studying.

“I prefer to focus on my culinary study,” says Sabouri. “We are representing our school and our country. We promised our school to be serious in our academics. I believe in ‘play hard, work hardest.’”

Sabouri took up culinary arts because he simply loves food and cooking.

He didn’t finish his Information Technology studies because he pursued his other passion, singing.

“After I saved enough money from my gigs, I followed my first love, cooking,” Sabouri says. “I used my savings to enroll at CCA. I really want to become a chef.”

Cheng is a registered nurse. After passing the board, he applied in hospitals. Waiting for a job call, he’d cook for the family.

“My dad enjoyed my food so he just told me to study culinary. I did and never regretted it,” says Cheng.

From their studies abroad, Sabouri and Cheng have learned to understand themselves better and what they want to do in life.

“I learned that you must love food and not just pretend to love it because you won’t be able to create the best-tasting food if you’re heart isn’t in it. I learned to respect other people’s opinions and work. I learned to get along with people of different culture,” says Sabouri.

“Being a chef itself is not really something special,” says Cheng. “What makes it special is the fact that you are able to do things you love doing most. The recognition we receive is just a bonus and we are thankful for that because it affirms that we’re doing something good,” says Cheng.

Sabouri and Cheng share their favorite Korean dishes they learned at Woosong University.

In a bowl, make the marinade. In a pot of boiling water, cook rice cake. Strain. Pat dry. Marinate. Blanch the oyster mushrooms. Strain. Squeeze out the juices. Tear into strips. Marinate. Marinate the shiitake. Stir-fry the marinated mushrooms separately as well as the rice cake. Place nicely on a plate. Garnish with red and green bell peppers and sesame seeds. Serve hot.

Heat up oil on a medium flame. Slice tofu into squares (1.5-cm thick). Pat dry and sprinkle both sides with salt and dredge in cornstarch. Deep fry until light golden brown. Strain and place on a paper towel, to absorb excess oil.

Slice bell peppers into triangles. Remove the pointed sides and shape it into a curve (for even cooking).

Slice the pineapple and apple. (For apple, 0.6 cm thick.)

Fry again the tofu until golden brown in high heat. Place the tofu on the thickened sauce. Mix well until coated. Plate and sprinkle with black sesame seeds. Serve.

Note: Deep frying twice will make the tofu crispy on the outside and yet soft in the inside.