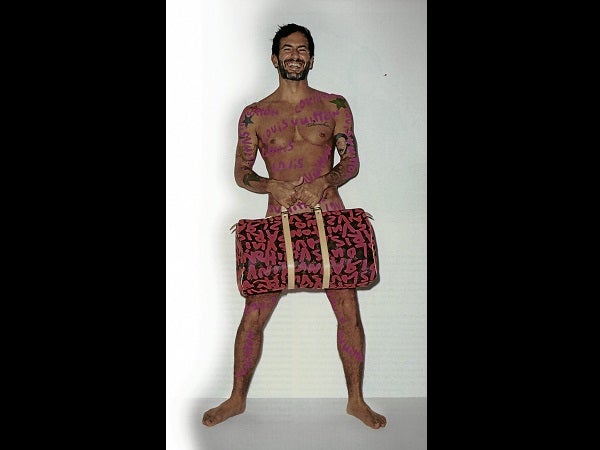 New book is the buzz–From Vuitton to Jacobs It would be a stretch to say Speedy- and Keepall-toting women and men are interested to know the historical provenance of their bags, more so if that exercise involves flipping through 300-plus pages of a colossal tome.

Still, there’s no denying “Louis Vuitton/Marc Jacobs,”    the 308-page book released to accompany an ongoing exhibit at the Les Arts Decoratifs in Paris, would be a handsome—and fitting—topper to anyone’s vintage Louis Vuitton trunk/coffee table. That, and an enlightening read, for sure.

The book, edited by Pamela Golbin, the Paris museum’s chief curator of 20th-century and contemporary fashion and textiles, with a preface by Louis Vuitton president Yves Carcelle, is published as a companion catalog to the exhibit of the same title, which opened on March 9 (it runs through Sept. 16).

The book and exhibit tell the story of two men, Vuitton and Jacobs, and their life parallels at two different periods—Vuitton in the 19th-century age of industrialization, Jacobs in 21st-century globalization—and how they made a luxury house thrive in their respective eras. It also marks Jacobs’ 15th year as artistic director of the venerable house.

The first part of the book traces the roots of Louis Vuitton, the eponymous founder, and explains in depth the transformation not just of the company he founded but, most importantly, the evolution of his trade.

Born in 1821 to a family of millers, Vuitton left his village of Jura for the French capital when he was only 13. It’s estimated that it took him two years, on foot, to reach Paris.

For the next 17 years, the young Vuitton apprenticed with a man named Romain Maréchal, whose occupation was “packager, trunk maker and packer” (layetier-coffretier-emballeur), a job that essentially involved packing and shipping merchandise, from china to women’s gowns.

Vuitton opened his own shop the year he married, in 1854. He sought to distinguish himself from fierce competition by simply calling himself a “packager,” but with a specialty: packing fashions.

It was an original idea; Paris haute couture was rising rapidly owing to Charles Frederick Worth, an English-born fashion designer who moved to Paris in 1846 and is widely recognized as the father of haute couture. Worth and Vuitton became collaborators.

Worth dictated a new mode of dressing; the items in the bourgeois wardrobe expanded exponentially, which was a boon to Vuitton’s business. The packaging boxes were included in invoices for fashion purchases.

The Frenchman’s clients spanned the globe, from London to New York to Cairo to Rio de Janeiro. There were royalty as well as celebrities of his time.

More than a successful businessman, Vuitton was also a multi-awarded innovator, with a number of patents in his name. He sought, for instance, to create trunks that not only wouldn’t wrinkle its contents in transit, but were also lightweight and waterproof. A month before his death at age 70, he applied for his last patent: that of an aluminum trunk. He won medals at expositions from 1867 to 1869.

In Vuitton’s time, packers distinguished themselves by the canvases they used. In 1877, he patented a striped canvas in different colors. He introduced the Damier canvas in 1888, which incorporated his name. Vuitton’s son and heir Georges would introduce the iconic Monogram Louis Vuitton canvas in 1896.

Vuitton had three motivations in his craft, which he continued to live to his dying days: 1) to improve and master his skills; 2) to fully satisfy his clients; 3) to innovate.

Admittedly, the book’s second half—as perhaps the exhibit’s—is more captivating, as it relates Jacobs’ Louis Vuitton history with multicolored images, all reflective of the gloss and pomp of 21st-century commercialization.

The luxury house’s most recognizable images and merchandise in the last 15 years are interspersed with delicious interviews and behind-the-scenes accounts from Jacobs and his team.

Jacobs arrived at Louis Vuitton during the post-Gulf War recession in 1997. The American, who previously designed Perry Ellis and was dubbed by Women’s Wear Daily as the “guru of grunge,” came at a period when, for the first time, French designers were outnumbered in the major fashion houses.

There were his fellow Americans Narciso Rodriguez at Loewe and Michael Kors for Celine, and the Londoners: John Galliano at Dior and Alexander McQueen at Givenchy. It’s said that the Americans were put there as a foil to the excessive Brits, expected to create “chic without the shock.”

Jacobs says he believes Bernard Arnault of LVMH, which owns Louis Vuitton, hired him to duplicate the success of another American, Tom Ford, at reviving Gucci. Ford worked for Jacobs at Perry Ellis.

“Creative talent was no longer the only criterion sought by the megabrands that held sway in this globalized world,” Golbin writes. “Fashion designers were required to be even more efficient in terms of marketing and artistic direction while taking the role of spokesperson of the brand. Marc Jacobs has proved to be the perfect man for this new paradigm.”

When he came in, Jacobs was baffled as to what defined the brand, and what made people buy it. He thought the luggage wasn’t the most practical or the most lightweight.

“I realized that it is [bought] because it is recognized. And it is the Monogram logo that gives it recognition.”

Bags, under Jacobs’ direction, would turn Louis Vuitton into the world’s most profitable luxury brand. (The idea for Monogram Vernis, a glossy leather embossed with the LV logo, was his.)

In 2001, he collaborated with the graffiti artist and fashion designer Stephen Sprouse, who essentially printed fluorescent graffiti over the iconic Monogram canvas for classic Vuitton bags. It was such a stark change for the traditional house that Jacobs’ bosses didn’t immediately take to the finished products—until the press began raving about them.

Jacobs would also work with Japanese artist Takashi Murakami and American painter Richard Prince, bravely subverting the traditional look of Vuitton, and delighting its contemporary customers from Moscow to Manila. The collaborations were equal hits. To this day, accessories remain the house’s biggest moneymaker, such that in nearly all of its runway looks, the models carry bags.

“The Vuitton woman doesn’t put her belongings in her pockets—that’s just not the way that it is,” echoes the designer.

If you had seen images of that luscious display of handbags in ersatz chocolate trays in the Paris exhibit,  this book would have you dreaming, if not for a first-class ticket to the City of Lights, then certainly for a new purse.