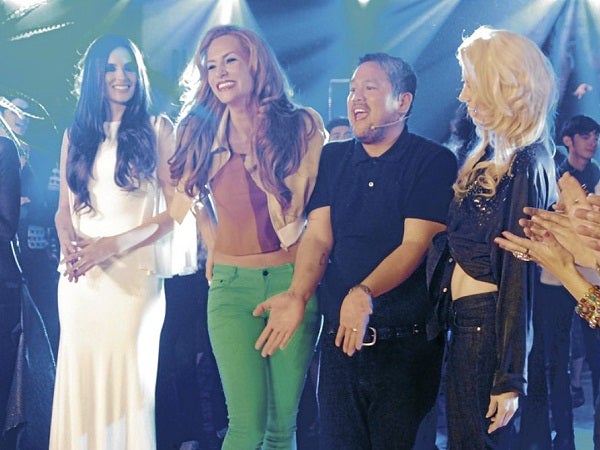 Tyra’s glamazons do our catwalk

I took out my highest stilettos when I was told I was going to meet Allison Harvard and Dominique Reighard.

I was not expecting to walk alongside the fan favorites of “America’s Next Top Model” (ANTM). To do so would be suicide. However, I thought I could use the extra inches to see them in the eye. I was right.

There were no press conferences, only intimate interviews at Picasso Hotel. When my turn came, I had to quell the fan-girl shriek that was threatening to explode in my throat.

Dominique was the first one I saw as the door opened. She was facing the door and leaning against the desk. Her silhouette was so picture-perfect that I instantly thought Tyra Banks should be very proud.

She was wearing a black jumpsuit and white braided belt from Bench. I thought she looked like a giant, the way she filled the room so magnificently. She smiled warmly and extended her arm. She was the one who broke the ice.

“You use your phone for a recorder. I do that all the time! I like to record myself with those things,” she said.

We were already seated when Allison joined us in the most unobtrusive fashion possible. She wore a blue, plaid buttoned shirt, jeans and yellow wedges from Bench.

She moved like her moniker, Allicat. She was graceful, quiet and swayed her head like a feline. She gave smart answers to questions in a voice that almost always was a whisper.

“I just did a fragrance campaign for Michael Cinco called Impalpable,” she said.

She and Dominique wore the designer first in “ANTM.” They couldn’t hide their excitement about being in the country, too. Allison jumped on her seat and pointed at the window and said she couldn’t wait to explore the country and meet everybody.

She said she finds time to paint during her downtime. She thinks she’s very lucky to have an exciting job such as modeling—she gets to go everywhere and still be able to paint.

She also spends a lot of time on the Internet, with different accounts in different social networks. She also tries to answer all her e-mails.

Before her stint with “ANTM,” netizens gave her the nickname of Cute Chan or Creepy Chan because of some of the photos she posted online. In these, she’s dressed in frilly dresses and dark eyeliners. Her large doe eyes gave the pictures a haunting feel.

“I didn’t know I was Creepy Chan when I was Creepy Chan.  It was a confusing time in my life. I was 16. They took my photos from MySpace. Somebody e-mailed me the links of forums with my pictures on it. The reactions of the people would be a mixture of the most horrifying and flattering comments you could ever read,” she said, smiling.

She’s never regretted posting the pictures, she said. She still finds the Internet fascinating and an avenue to express herself. She does admit that now that she’s older, she is more conscious of the things she posts online.

Dominique is savvier in dealing with the press. She tells everyone that she’s looking forward to do more projects here. She reveals she will be back before the year ends for an album.

Her single “On Top of the World” is a song you would love to dance to in a club. It stays true to the first single she made with ANTM—“Tooch Ya Booty”.

“I’ve always loved Mariah Carey (giggles). As a little girl, I thought I was half Mariah and half Tyra. I was lucky to have met Tyra. Now I hope I meet Mariah,” she said. “I had my little brothers recording me with a camcorder while I sing and do my model walk.”

The glamazon was one of the outspoken models in the series.  However, it has affected her only in a good way, she said—people see a different side to her when they finally meet her.

“I am a work in progress, and I am forever changing and forever growing and that will never stop.”

I was also lucky enough to see their walk at SMX Convention last Sunday.  A video editorial of “Impalpable” was shown. Allison and her beautiful eyes were, of course, the stars of the show. She was in a white gown and looked like she was floating in the clouds. It reminded fans, like me, of her music video “Underwater.”

There was hushed excitement as Dominique hit the runway. She was smoldering hot in her white gown.

Allison, meanwhile, looked like an innocent child when she walked in—so breathtaking. I remembered when I asked her where she planned to go from here.

After the show, she tweeted that she wanted Manila to adopt her.