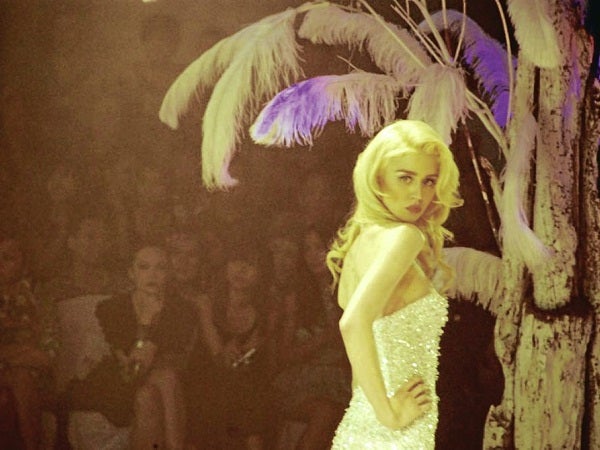 Instead of making up some fantastic story about how she loved Impalpable, Bench’s newest fragrance by Dubai-based Filipino fashion designer Michael Cinco, American model Allison Harvard was candid enough to admit that she had yet to try on the scent.

Harvard is the newest celebrity import to join the Filipino global brand’s growing list of famous foreign endorsers. And Bench couldn’t have picked a more honest and disarming personality to introduce its latest product.

It was two days before the perfume launch, and Harvard and fellow American model Dominique Reighard were holed up in a suite at Picasso Hotel in Makati doing press interviews.

Both alumnae of “America’s Next Top Model” (they competed in different seasons with Harvard landing second in both regular and “all-star” runs) also graced the recent Philippine Fashion Week at SMX.

It was their first time in the country, and both were looking forward to doing Boracay before flying back to the US.

“I’ve heard so many good things about the Philippines from Filipino friends in the States,” Reighard enthused. “When it comes to food, they told me to try a bit of everything, and I’m doing just that.”

Harvard also had her first serving of chicken and pork adobo the other night. Her friends told her not to leave the country without sampling it, including some “fruit” in season, presumably the world-famous Philippine mango.

“I tried adobo, and it was really good,” she said in soft girlish voice. “They also took me to the Bench store at Glorietta to do some fitting before going to Bench Fix salon to have my roots done.”

If Harvard were to gauge Cinco’s debut scent based on the designer’s creations she wore during a daylong photo shoot the day before, Impalpable, she said, would probably be as “dreamy, whimsical, feminine and fresh” as his beaded and form-fitting dresses.

“I’m private, in a sense,” said Harvard, who is also known in the Internet community as “Creepy Chan,” a character she hid behind in while selling her paintings.

“I’m quite shy. But I like to think of myself as also very warm. Like if you ask me a question, I’ll answer it. I’m very open in that sense, which is a bit of an oxymoron.”

Harvard, who also dabbles in abstract art and portraitures, doesn’t have privacy issues, and makes it a point to read fan mail. She’s fascinated with the works of such legendary photographers as Helmut Newton and Francesco Woodman.

Despite her quirky persona, fans love her.  (In an online material, she claims to be fascinated with blood and once reportedly declared while auditioning for “America’s Next Top Model” that she finds nose bleeds attractive.)

Harvard also wants to be like Vivienne Westwood “when I grow up.” She admires the British fashion legend not only for her edgy designs, but also for how she has evolved through the decades. She’s in  awe of and  inspired by Westwood’s strong points of view, on and off the fashion scene.

“I’ve learned a lot from other people, from the way they open up to me in their letters,” said the bleached blonde looker who’s blessed with probably one of the most expressive  round eyes in the business. “I guess, in that sense, I’m quite privileged.”

The native Texan, who, like Reighard, is based in LA, is so far enjoying the ride and has little to complain about.

“I’m just having a great time with all the wonderful things I’ve gotten to do lately. How could you be upset now about anything? Sure, everybody is critical in the industry we’re in, (but) the biggest part of it is looking at all the great things you get to do and have.”

Competition from fresher, younger upstarts doesn’t seem to faze her. If it does, she has a positive spin to it.

“I think the second you make insecurity an issue, it becomes a permanent insecurity,” she said. “I think the only way to avoid that situation is to keep on doing your best until it stops being fun.”

The dusky Reighard, who bears a striking resemblance to Jennifer Lopez, must deal with a different set of challenges. Now the mother of two young girls, she misses her family badly each time she does an out-of-town gig.

“Being away from my family for extended periods  is the hardest,” says Reighard, who has managed to stay slim, even in motherhood, by eating “healthy,” drinking at least a gallon of water every day and doing regular cardio workouts. “But I’m blessed to have a career and be able to do the things I’m really passionate about.”

Even in childhood, she already knew her calling. There was even a time her brother would videotape her as she sang at the top of her lungs a la Mariah Carey.

“As a child, we all had our Mariah Carey moments, didn’t we,” she said, waiting for approval. “Or perhaps, it was just me. Performing has always been my dream, and now I’m living it.”

Her preference for trendy stuff from Canadian duo Dean and Dan Caten of DSquared2, over more classic lines by such American designers as Calvin Klein and Ralph Lauren reveals her inner “rock star.”

“There are so many layers to me when it comes to fashion,” Reighard said. “My style is still evolving. My whole life is about growth and evolution. I love clothes by DSquared2 because they make me feel like a rock star and elegant, feminine and young.”

Like Harvard, Reighard is all praises for Cinco’s brand of fashion. She loves the silhouettes and the intricate details.

Apart from singing, Reighard also composes, hosts and acts. She has just finished “On Top of the World,” an original and upbeat track that will be her album in the making’s carrier single. When asked for a “sample,” Reighard, without skipping a beat, broke into song.

And Filipino producers listen up. This woman is also open to do hosting jobs in Manila. And if she is really that versatile, she might even learn to speak Tagalog.

“More than anything, I want to show my girls that they can reach for their dreams if they want to by showing them through example,” said the Ohio native. “Whatever they want to be, I would allow them to follow their dreams.”

For these two young, bright women, nothing, it seems, is impalpable and impossible.