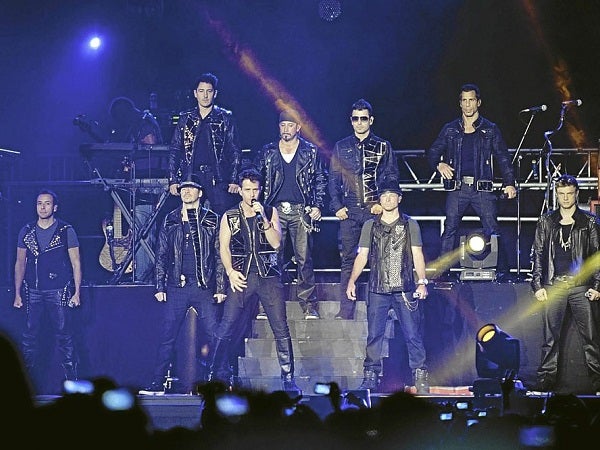 Why boy bands (and their fans) will never grow old

Looking around the SM Moa Arena before the NKOTBSB concert began, one could easily notice three things. One, it was packed to the rafters. Two, there were practically no teenagers around, which was actually quite logical, considering that those who claim to be diehard fans would at least have to have been born in 1993—back when BSB, the “younger” of the two groups, first formed. And three, the crowd was surprisingly made up not just of ladies in their 20s and 30s (yes, even 40s!), but of men who were man enough to show their love for the two legendary boy bands that little girls swooned over and little boys secretly idolized in the ’80s and ’90s.

Most people might poke fun at the scenario, where adults behave like the children they once were. Well, we say forget about those people. Age isn’t a number; it’s a state of mind. And to think you’re still wondering why, after that concert, people (boy bands and audience alike) looked a heck of a lot younger than they did before they’d entered. Here are four reasons:

If you’ve got it, you’ve got it (and, boy, they still do). Make no mistake, these New “Kids” On The Block and Backstreet “Boys” are now grown men in their early 30s to mid-40s, give or take a few wrinkles and the occasional muffin top. But as the night wore on, it seemed like they’ve never aged at all; the nine men—sans oldest BSB member Kevin Richardson—still sang and gyrated like it was 1989 (or 1995) amid gorgeous lights, jaw-dropping pyrotechnics and high-pitched shrieks of delight.

Sure, the melodies might be mawkish and outdated compared to the sleek, digitized tunes of today, the dance moves a tad too cheesy. But this was what made us fall in love with them in the first place, and fall all over again. Jordan Knight’s ageless falsetto could still hit the sky, a shirtless Donnie Wahlberg looked amazingly fit for a 42-year-old (probably due to his workout for the action drama “Blue Bloods”), and Nick Carter shamelessly milked his golden-boy charm for all its worth. The guys even went down into the Patron Area for some impromptu meet-and-greets, while the BSB quartet each serenaded a lucky fan from the audience onstage during “I’ll Never Break Your Heart.”

Haters can hate all they want; if a 40-year-old can look and sound as good as his 20-year-old self, then he must be doing something right. After all these years, these guys still know how to make a girl feel special.

A good trip down memory lane is always worth it. Before you know it, you’re back to being the starry-eyed tween who could dream and gush about pop idols without being told to wake up and grow up. Those moments may be priceless, but reliving them quite literally comes at a price. Granted, the tickets are quite expensive, but these male pop group pioneers practically serve as the benchmark for all boy bands, and we lucky Pinoys were getting two for the price of one. Whether you paid for your ticket or not, the show was worth every centavo. In this case, it was two solid hours of reminiscing about happy days gone by; you’d be surprised to find out that you still remember all the lyrics and the dance moves, even when you haven’t heard the song in over a decade. The eye candy isn’t bad, either. Not bad at all.

The concert rush is our “runner’s high.” One word: “kilig.” Nothing beats the natural high you get from concerts, especially if it involves seeing your childhood crushes serenading you in the flesh instead of just through your tape decks and pinup posters. If you want to get scientific, it’s all because of those endorphins that you get from the concert “workout”—that is, jumping up and down, squealing your lungs out with your friends and working up a giddy sweat. Endorphins can make you happy, and it’s no secret that happy people look and feel so much younger. Let’s face it, this is as close to the mythical fountain of youth as one can get.

Music is timeless… And so are we. This was bubble-gum pop history, right here. For both artist and fan, it was a mind-blowing trip in a ’90s time machine; this was the one night where these men relived their glory days, and where fans relived their ultimate boy band fantasies without fear of being judged or ridiculed.

If this generation has One Direction and The Wanted, ours had NKOTB, BSB, Boyzone, Take That, *NSYNC and, heck, even Menudo. But that’s where the so-called generation gap ends. Whether or not you were still in diapers during their heyday, it doesn’t really matter. A fan is a fan, regardless of age or musical preference.

So we probably looked silly flailing around like giggling schoolgirls, and the NKOTBSB guys probably felt somewhat embarrassed at some point to be dancing and prancing onstage like boys half their age. But, really, who cares? Our kids might cringe in shame at their parents’ antics, but it’s undeniable that we were part of that generation. We still are, and we’re darn proud of it.

Yes, we know we’re getting old. But the fan, the feeling and the fun-filled memories in all of us never will be.

“NKOTBSB Live in Manila 2012” was presented by Ovation Productions.