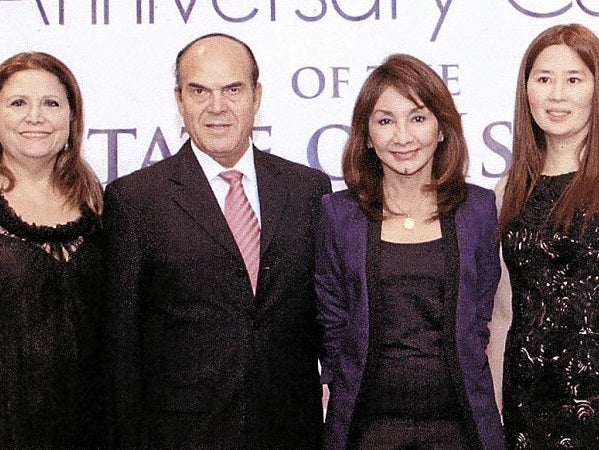 A reception at the Manila Room of the Marco Polo Plaza Hotel marked the 64th anniversary celebration of the State of Israel. In attendance were Israel’s Ambassador Menashe Bar-on and his wife Mme. Esther Bar-on.

Hosting were Honorary Consul of Israel in Cebu Emily Benedicto Chioson and the Israel Chamber of Commerce of the Philippines, led by its executive director Ferdinand Sarfati.

Cebu Gov. Gwendolyn Garcia was present and delivered a much-applauded speech. She traced the friendship between the Philippines with Israel and its people to the era of President Manuel Quezon.

At the time when Jews were being persecuted in Nazi Germany, the Philippines opened its doors to those who wanted to settle here. In 1948, the Philippines was the first Asian country to recognize Israel when it became an independent country.

At a given moment, everyone moved to the hotel’s ballroom for a performance by Eran Katz, renowned author and mentalist. He is called a memory guru, which he proved to the appreciative audience. It was fun learning some memory tricks from him.

The Marco Polo ballroom was also the venue for the induction and turnover ceremonies of the CCCI, attended by Cebu City Mayor Michael Rama and Gov.  Gwen Garcia. In a program emceed by Bunny Pages, Samuel Chioson handed over the presidency to Prudencio Gesta.

It is going to be a busy year for the CCCI in preparation for its 110th anniversary in 2013. At that time, they will also be hosting the international confab of Chambers of Commerce from all over the world.

Hence, the CCCI focus on tourism development throughout June, celebrated as Cebu Business Month, and launched with a lot of fanfare on June 1 at the Terraces of Ayala Center. On June 16, there will be a fun run at Cebu Business Park, and the “Talento Cebuano” show at the Ayala Center activity area.

Mila Espina heads the CCCI Tourism committee, while Tessie Chan is in charge of the Cebu Business Month Tourism Congress scheduled for June 28. There is a full schedule of activities the whole day at the Cebu International Convention Center, and a grand celebration in the evening, at the Marco Polo.

The art exhibit “Homage to Mothers” drew a lot of viewers and buyers to the lobby of Montebello Villa Hotel. It was the 35th one-man shoe for prolific Cebuano painter Celso Duazo Pepito, who has organized numerous art shows in this venue.

Cutting the ceremonial ribbon were lawyers Erlinda Boiser Ramos and her daughter Regina Ramos. Assisting were Zelia Borromeo and her nephew Greg B. Cancio, Montebello’s president and general manager.

Heidi Cabaluna, Montebello’s senior sales manager, gave a capsule biography of Celso which summed up his trajectory as an artist. He was born in 1956 in Daan Bantayan, on the northern tip of Cebu island. He grew up in Malaybalay, Bukidnon, and realized he could draw well into his college years.

Celso studied fine arts at the University of the Philippines Cebu College where his mentor was Martino Abellana, gifted pupil of Amorsolo. Manansala was his inspiration for cubism, as well as the late Cebuano abstract artist Tito Cuevas.

With fellow painters, Celso formed Cebu Artists Inc. of which he became president in 1993. He is inspired by his wife Fe Madrid and their three children. In a career that spans 31 years, aside from his 35 solo shows, Celso has participated in more than 100 group shows, some of them abroad.

The latest is “Kita,” meaning “Us,” scheduled June 8-13, also at the lobby of Montebello. He is responsible for organizing the show “The Philippines/Indonesia Art Exchange.”