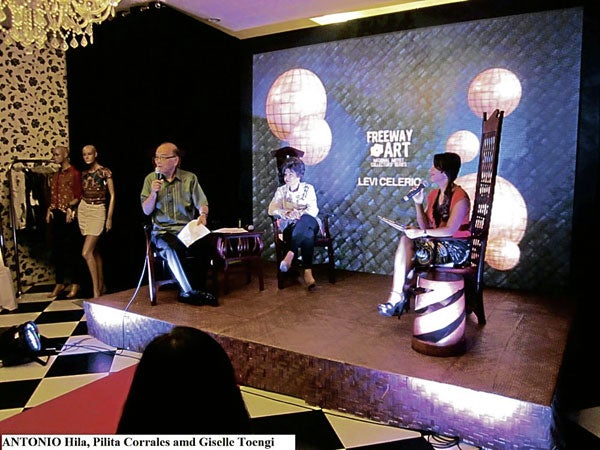 Fashion tribute to a people’s lyricist

Much acclaim has been heaped upon National Artist for Music Levi Celerio, and most if not all of it deserved.

But did he have any eccentricities? What were his faults?

Olivia Celerio-Belen, public-school teacher and the master lyricist’s daughter, hesitated and looked at her brothers Levi Jr. and Luis, and then replied: “Aminin na natin. He was a lover of women.”

But she hastened to add: “He was a lover of beauty, not just a lover of women.”

In short, the National Artist, famed for his 4,000 lyrics and leaf-playing (which landed him in the Book of Guinness), had a colorful love life.

The impromptu interview took place in the recent Freeway Art tribute (at Glorietta 5, Makati City) to Celerio, the seventh in a series.

Freeway has a fashion collection and ensemble inspired by the works of National Artists.

Recalling her famous father, Olivia said “his experiences in other countries made him proud to be a Filipino. He was a joker, a humorist. He always looked at the positive side of life. And he had a great faith in God. Ang Diyos ay pag-ibig.”

Ka Levi was not strict as a parent: “He would talk to you and just explain.”

In addition to his thousands of lyrics, Ka Levi also composed a few songs. Olivia said she had two of his compositions, “and I hope to publish these into a collection of his songs and lyrics.”

During the tribute, classical guitarist Ferdie Medina serenaded the audience with well-loved songs, many of which contained the Celerio lyrics.

Guest singer Pilita Corrales, who had worked with the National Artist, wowed the crowd with songs made famous by the lyricist, including the show-stopper “Ang Pipit” (with choreography), which Ka Levi composed.

The guest of honor, or resource person, was music critic Antonio C. Hila, a regular contributor of the Inquirer, and friend of the Celerio family.

“Levi is best remembered as poet,” Hila said. “Why poet? Because he had prosody. He wrote the lyrics with ease. There is cadence, rhythm, flow. His sense of rhythm is fantastic.”

Composer Santiago Suarez discovered him in the 1930s. He aspired to be a writer like Huseng Batute (poet José Corazon de Jesus).”

Hila categorized music into academe and folk: “He [Celerio] did not pass the first, but he had the language, the sensibility of the people. He was the favorite of ‘legit’ composers like [fellow National Artists] Lucio D. San Pedro and Ernani Cuenco.”

Asked if the present crop of lyricists can compare with Ka Levi, Hila said: “There is only one Levi Celerio. There will always be one Levi Celerio, one for each generation.”