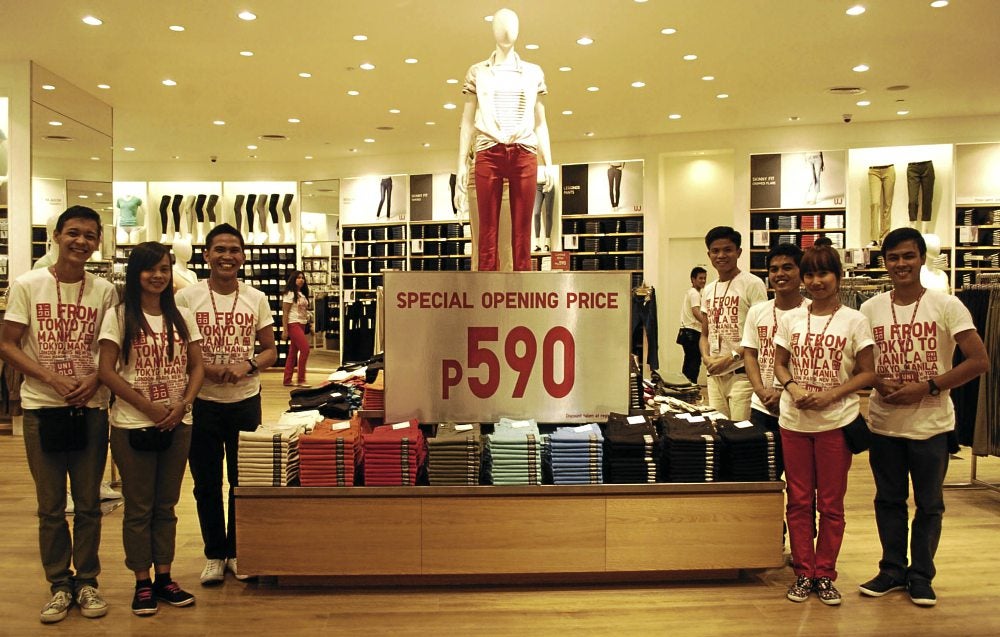 Uniqlo opens–says ‘50 more stores in the next three years’

Uniqlo’s first Philippine store had yet to open, but Tadashi Yanai already expressed his company’s plan to open 50 stores in the country in the next three years.

Yanai, listed by Forbes magazine as the richest man in Japan, arrived in Manila on Wednesday to oversee the final preparations for Uniqlo’s much-anticipated opening at SM Mall of Asia Friday. (The main mall opens 7 a.m. Friday in anticipation of the long queue of shoppers, typical of Uniqlo store openings.)

He wasn’t staying for the opening, but Yanai, 63, chair and chief executive of Fast Retailing Inc., which owns Uniqlo, has been known for his hands-on management style, at times even working the retail floor. It’s an example that’s followed by even his most senior executives.

The billionaire businessman didn’t show any sign of wear even as his whirlwind Philippine visit had a full schedule, including a courtesy visit with President Aquino Thursday.

“The store turned out really well,” he said, visibly pleased as he surveyed the store on the second floor of MOA’s main mall, where Marionnaud and SM Kultura used to be.

Uniqlo arrives in the Philippines in partnership with SM Retail Inc.

started small, and so did we,” Yanai said.”] 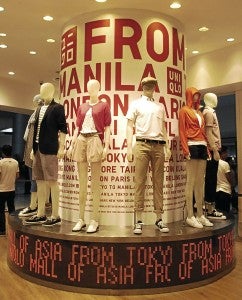 He feels the same excitement whenever a new store opens, Yanai said, wherever that store may be.

Outside, mallers milled at the entrance of the new store, lured by the massive signages proclaiming merchandise at major markdowns (for the next two weeks, men’s denim jeans and women’s skinny jeans in a plethora of colors are marked down at P590/pair; the popular UT tees are also discounted at P590 for a week).

“It’s our hope to open 50 stores in the next three years,” Yanai said. The company is on rapid expansion globally, and it’s just starting. In the last few years, it has grown to become Asia’s No. 1 retail clothing brand.

“I’ve just always liked to compete and win against other brands or the other person,” he said when asked about his  seeming insatiable appetite for success. “I want to be No. 1. Money has never been my motivation. In terms of business, I want everybody in the world to know this brand. That’s my motivation, that’s my company’s motivation. That’s why we’re working very hard.”

When Uniqlo opened its Tokyo flagship in March, Yanai’s staff talked about his hands-on management style. He micro-manages, they said, often perusing each new item or design that goes into production.

“You cannot manage a business from afar,” he said. “You have to be there on the floor and work with the people. I expect the same from whomever I’m leaving the business behind with.”

His heir-apparent will be a team, though, he clarified, not an individual. “I won’t hand it over to one individual and expect that individual to do everything I’m doing now.”

Yanai found a kinship with the Sy family, his local business partners, particularly Teresita Sy-Coson, vice chair of SM Investment Corp. “I’ve always felt similarities with Teresita-san,” he said. “She’s second-generation just like me, and she’s continuing the business. [The Sys] started small, and so did we.”

“Aside from being the No. 1 tennis player, for us Djokovic is the No. 1 athlete in the world,” Yanai explained of Uniqlo’s choice of ambassador. Djokovic’s civic advocacies, he added, was what clinched the deal. “He is very active in his advocacies; he has done a lot to contribute to society. He’s from Serbia, a country that has suffered a lot. After the Japan earthquake in 2011, he was very active in sending help to Japan.”

Uniqlo, Yanai clarified, isn’t expanding into tennis or performance wear anytime soon. Nor will it create tennis shoes for Djokovic, who currently wears another brand. Djokovic’s tennis whites and blues at the 2012 French Open were created exclusively for him.

On his Malacañang visit, Yanai said he planned to encourage the President to foster better relationship between Japan and the Philippines.

“I heard he’s very popular and very hardworking,” the Japanese said of President Aquino. “I’d like to wish him luck on his work.”

Yanai isn’t a superstitious man. He laughed heartily when asked if he followed a ritual to ensure a new store’s success. “I don’t believe in those things. But my wife does.”

In the early days of Uniqlo, Yanai said his wife used to go to a shrine in Japan, gather some ashes and scatter them around the stores. She has stopped doing that.

“And maybe it won’t work in other countries,” he said, smiling.

Judging by Uniqlo’s success in other markets so far, the company looks in no need of a ritual or magic spell to duplicate that triumph here.